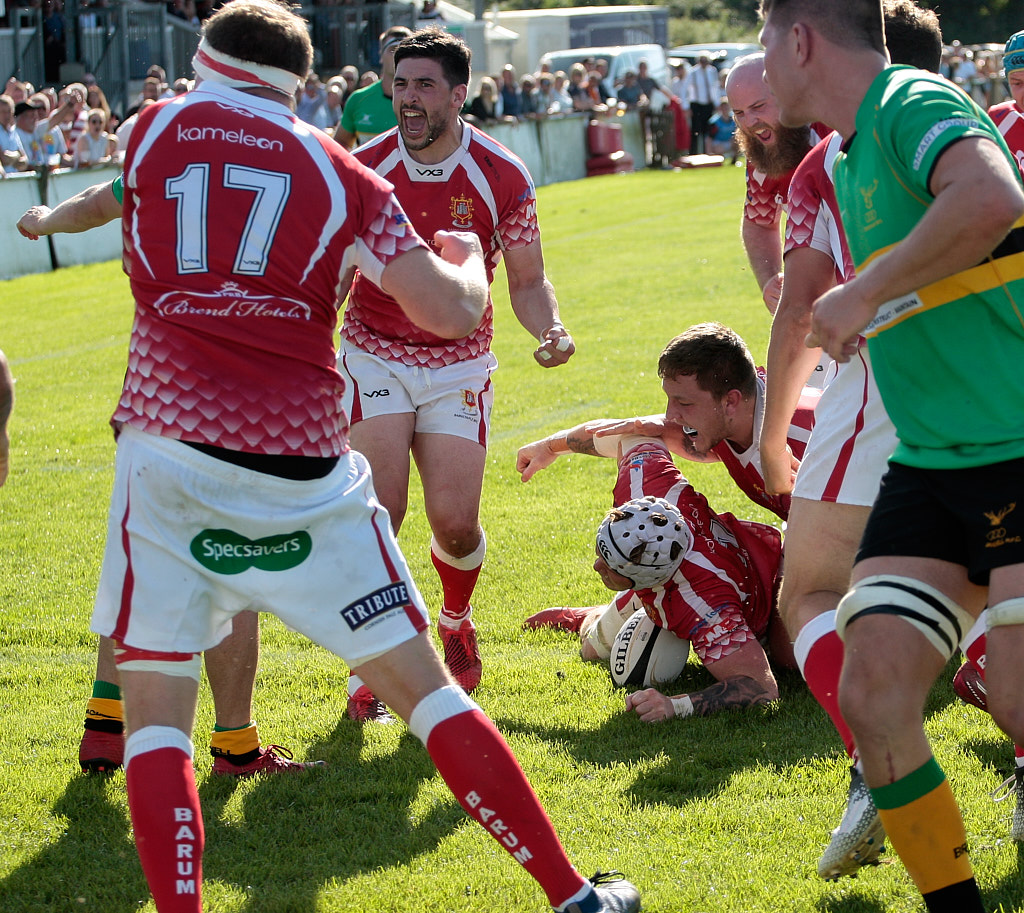 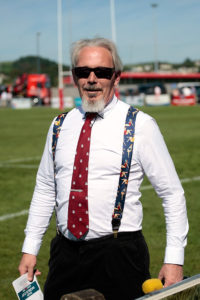 What a glorious day it was that started the Chiefs campaign off. It felt like just a continuation of the Devon Cup final with massive sunshine warming us up and a big crowd for the start of the season. Happy days, and happy it was as Barnstaple cruised to a very nice 35-3 win over a disappointing Bracknell side it has to be said, albeit gaining that all important bonus point right at the death. Today was the first time that the Mighty Barum supporters got to see the new signings and they acquitted themselves superbly. Josh Davies looked alert and dangerous but didn’t really get much of the ball today but you could hear the expectation in the crowd each time he had the ball. Brendon Darley was also in good form and slotted in nicely at Blindside. For me though Haydn Lidstone impressed  , yes some of his ideas never gained fruition but he was quicker than I expected, has a great range of passes and some tremendous kicking, something we have lacked in consistency for a while now. I know, he still has to compete against the Taw breeze as winter rolls in and that will be a challenge as we all know what those winds can be like just for us spectators and it was a still day today, nevertheless it was great to see us put pressure on consistently with kicks deep into the other half.

So to the game and the first 15-20 minutes was, to be generous, a case of ring rust, as players often dropped or forgot to protect the ball and there was a little sloppiness at times but the Chiefs got over it and began to settle probing and trying what they can. It was already apparent by this point that Bracknell didn’t really have any threats and our defence held easily to be fair, conceding just three points all game from a penalty on the first half. The first try saw some lovely passing between Ryan Carter and Jake Murphy which opened up Bracknell and was finished off by Winston James for the first of his hat-trick of tries today. The second came from a typical Chiefs driving maul to give Winston his second. Penalties by Jake and an almost 50 yarder from Haydn had the Chiefs go in 20-3 up and it felt comfortable from where I was sitting. 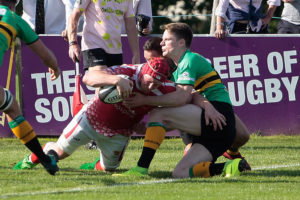 The second half followed much the same pattern with Bracknell trying to probe our defence a few times but not causing undue problems and it did start to get fractious as the half drew on with way to many penalties given away by the Chiefs, something they will need to rectify very quickly before their trip to Brixham next week. Jake Childs showed us all what we had been missing while he was away, having bulked up a bit he was looking as fit as I’ve seen him and it was his sheer strength and tenacity that drove him over in the corner for Barnstaple’s third with defenders unable to stop him.

By now it was getting concerning that we hadn’t yet got that bonus try and with a spat between Dylan Gosling and a Bracknell player resulting in a yellow card each, the Chiefs got the penalty which they duly put into the corner with the resulting catch and drive giving Winston his third try and more importantly Barnstaple’s first bonus point of the season. 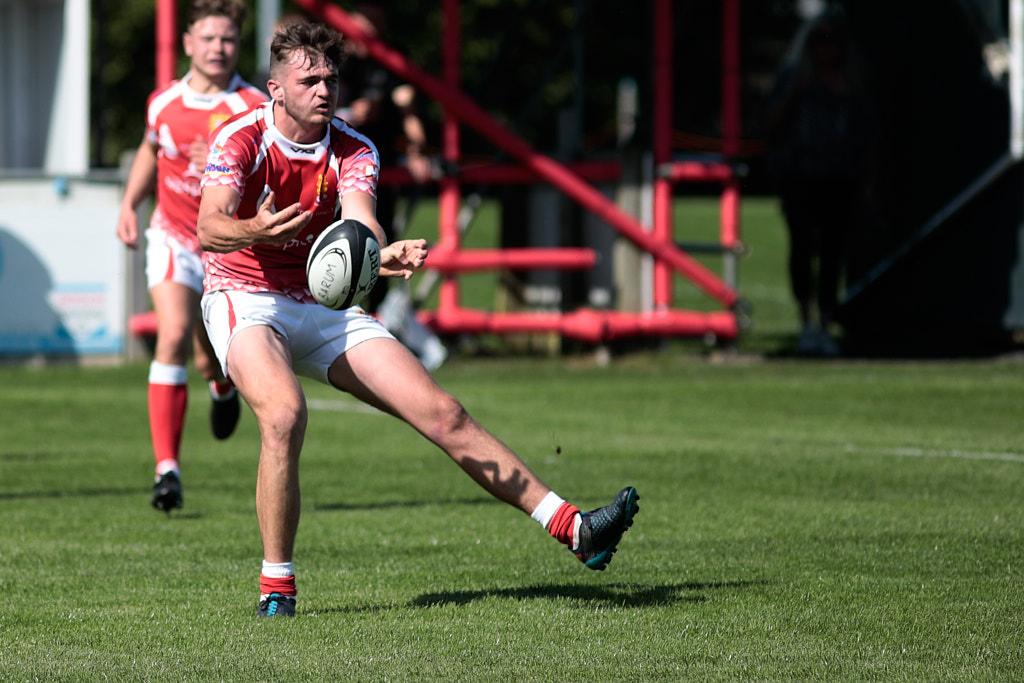 As I mentioned before Bracknell really didn’t trouble us and credit must go to our defensive work, we looked a touch quicker at the breakdown and in support much quicker, except when Josh Davies sped off leaving everyone behind, but it will be interesting to see how good we are against stiffer opposition. As for the scrum without James Starkey today and the retired Kev Angel and recovering Brad Drew, I was worried about how our front row would cope given the size of theirs especially as Nat Bayet had been drafted in from the back row to play at prop, but I shouldn’t have worried as they played a blinder today.

So with a little more variety and the prospect of some exciting attacks it is a pleasing start for the Chiefs and stands them in good stead for the challenges to come, and challenges there are as the rest of the league starts to flex their muscle. 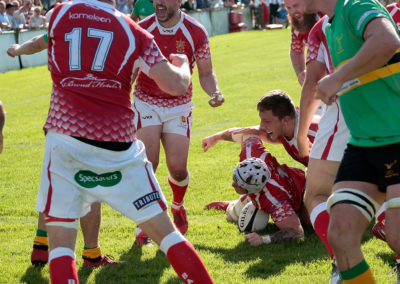 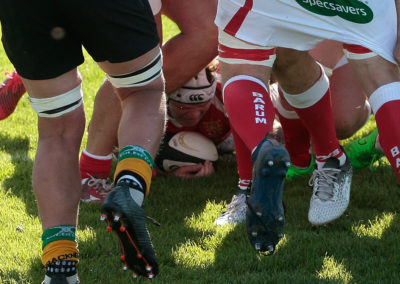 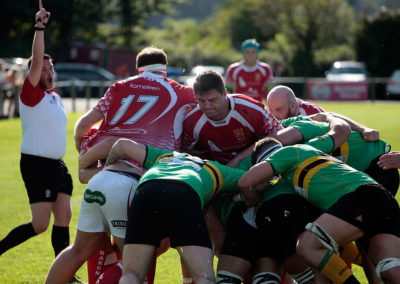 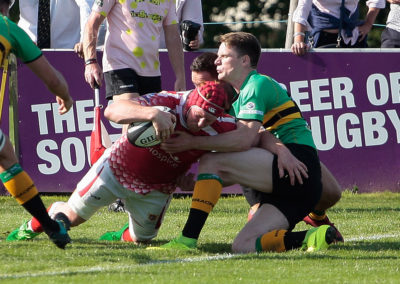 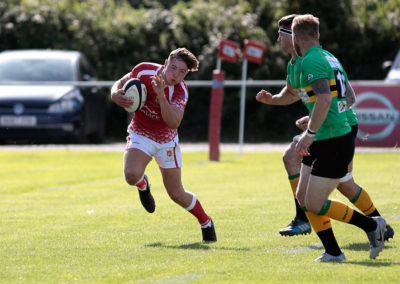 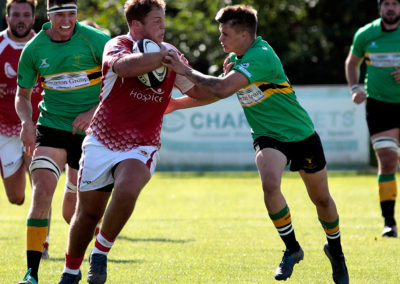 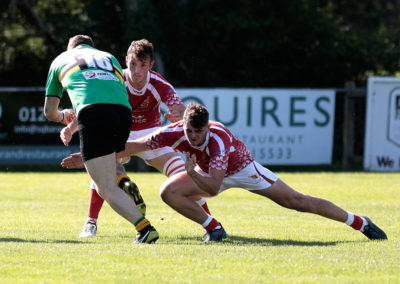 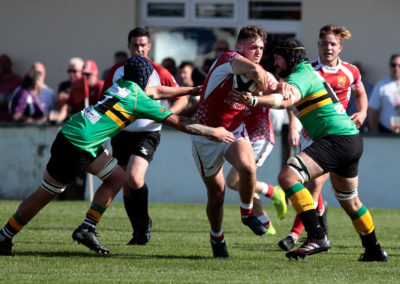 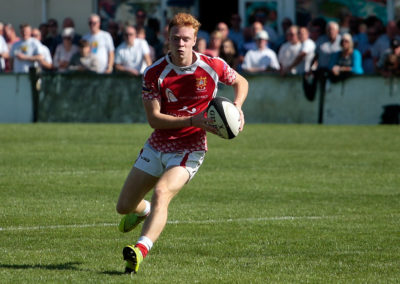 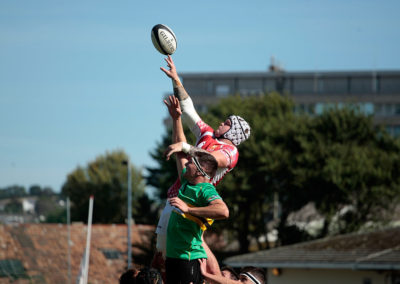 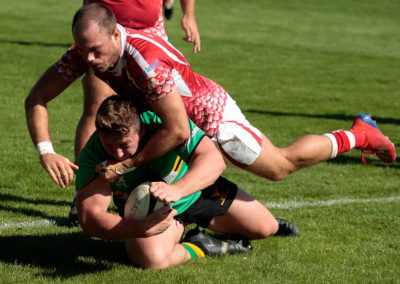 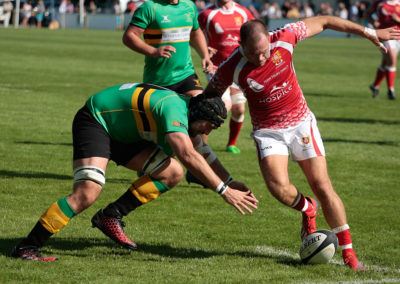 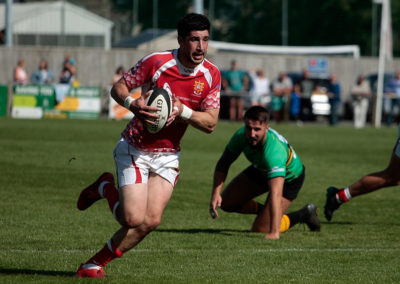 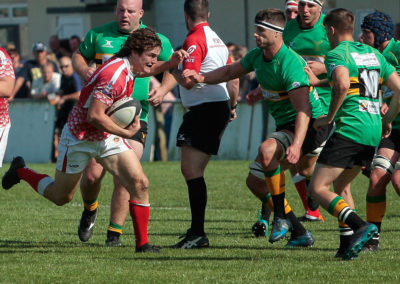 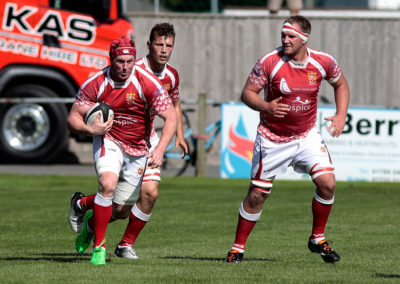 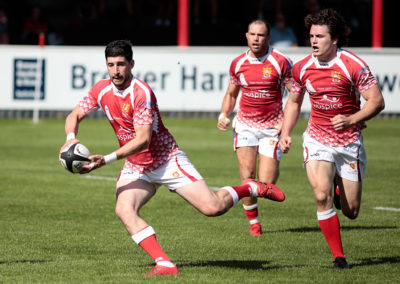 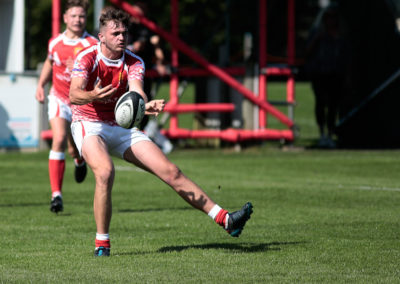 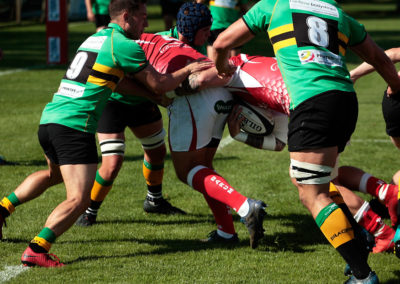 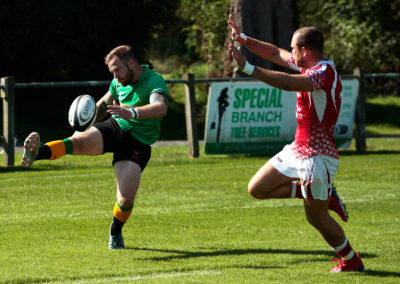 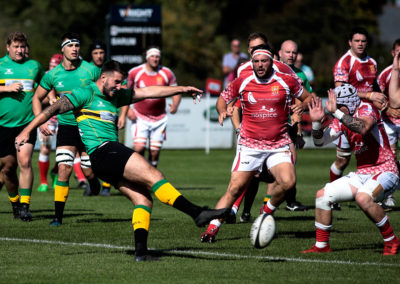 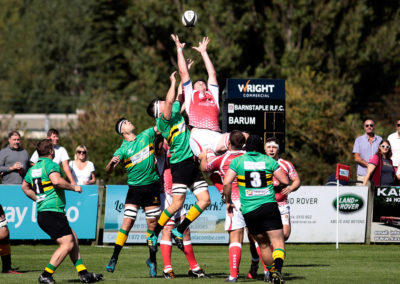 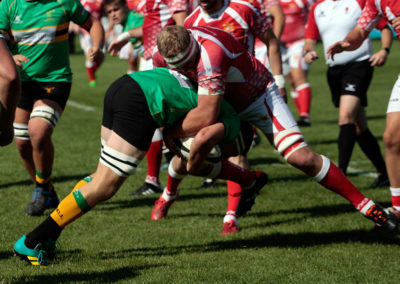 First up of course is next week’s opponents Brixham who having narrowly beaten Okehampton last week found themselves on the wrong end of a high scoring game at Western Super-Mare Losing 38-29. This is WSM’s second 30+ point game on the trot and may point to a strong showing from them this season following on from last season’s strong finish.

Okehampton got an impressive first win at home beating the Cornishmen of Camborne 28-14. Already having found their feet so early in the season Okehampton are going to be a tough team to play against this season and are starting to impress. The other two promoted sides didn’t fare so well with Newbury Blues losing 20-24 to a visiting Drybrook and Launceston getting absolutely hammered at home by Exmouth 24-76 and does have echoes of how the Old Pats started their campaign last year.

The two biggest threats this season had an absolute cracker of a game with Maidenhead just beating Exeter Uni 45-43. What this say’s about both teams defences is a matter of conjecture nevertheless these two will be serious threats over the coming weeks and do know how to score.

Well that’s it for the South West Premier don’t forget it’s an away day to Brixham next weekend and you all should really go and give the lads a boost. It is a lovely ground to visit. The following weekend is Ladies Day as the Chiefs face Camborne at Pottington Road, kick off for that will be 2.30pm. Of course don’t forget before that game we have the first World Cup breakfast on Sunday 22nd September when England play Tonga. Breakfasts will be served before the game starts with kick off at 11.15am. 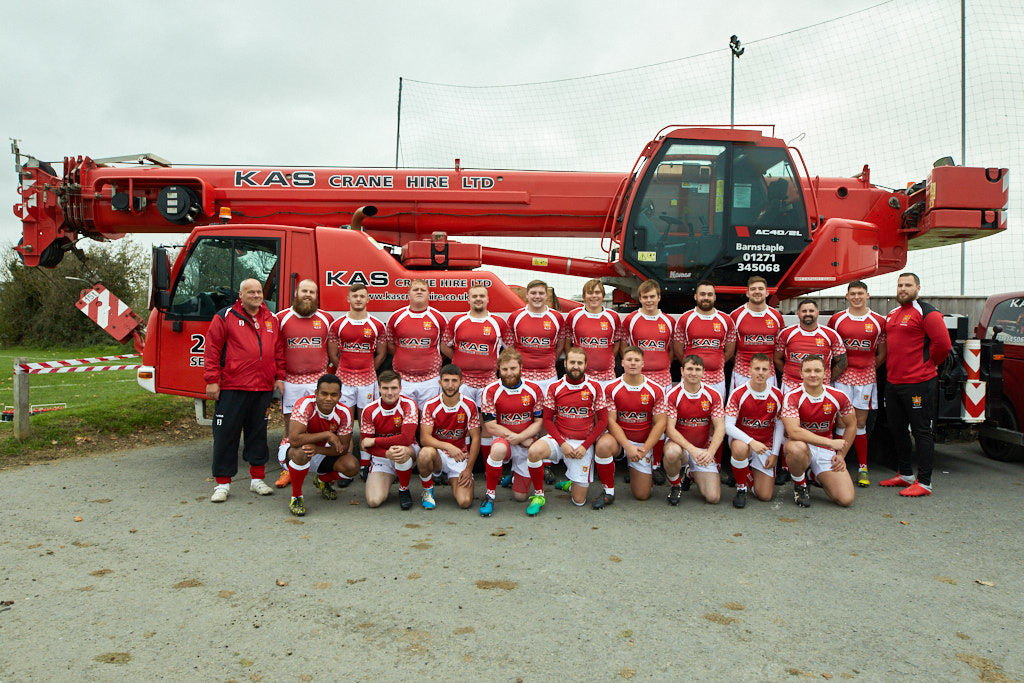 The Tic’s enjoyed success on their first outing of the 2019/20 Merit table season as they put 7 tries past Cullompton to win 45-7. A very impressed Scott Warren had this to say about his team’s performance.

The efforts we have put in over pre-season really paid off. The tempo we played at for the full 80 minutes Cullompton just couldn’t handle the pace we were playing at. The gain line was constantly won by us which gave us really good quick clean ball for Zac Davies. Patterns and plays we have brought in this year showed that they are going to cause teams a lot of problems this year if we carry on like that. We were a real difficult team to defend against which made us very hard to handle for the duration.

Man on the match was Robbie Hume who stepped into fly half and played outstandingly well directing us around the field. Our back row was a standout of the game as well with Matt Phillips, Alfie Pennyfield and Josh Beech really stepping up and leading from the front

Tries were scored by

Well that’s it for another week don’t forget if you can’t make it for Brixham then both the Tic’s and Colts are playing at Pottington Road so get your backsides down to the club and enjoy some entertaining rugby.