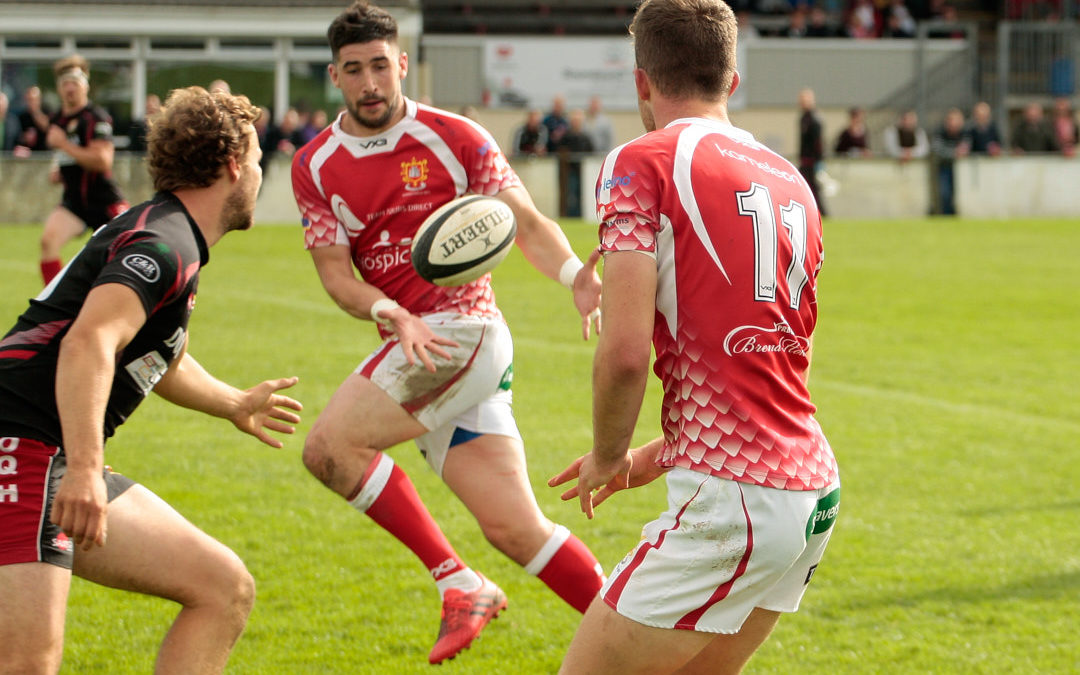 Well that feels good being on top of the tree after playing just three games, mind you there is still an awfully long way to go and a lot of much tougher games just around the corner but even so we might as well enjoy basking in the limelight however brief that may be. What I am enjoying is the rugby we are playing at the moment with good attacking lines, great support and quick ball, but even more so our defensive line and discipline which has kept the points conceded so far to just 31 points. 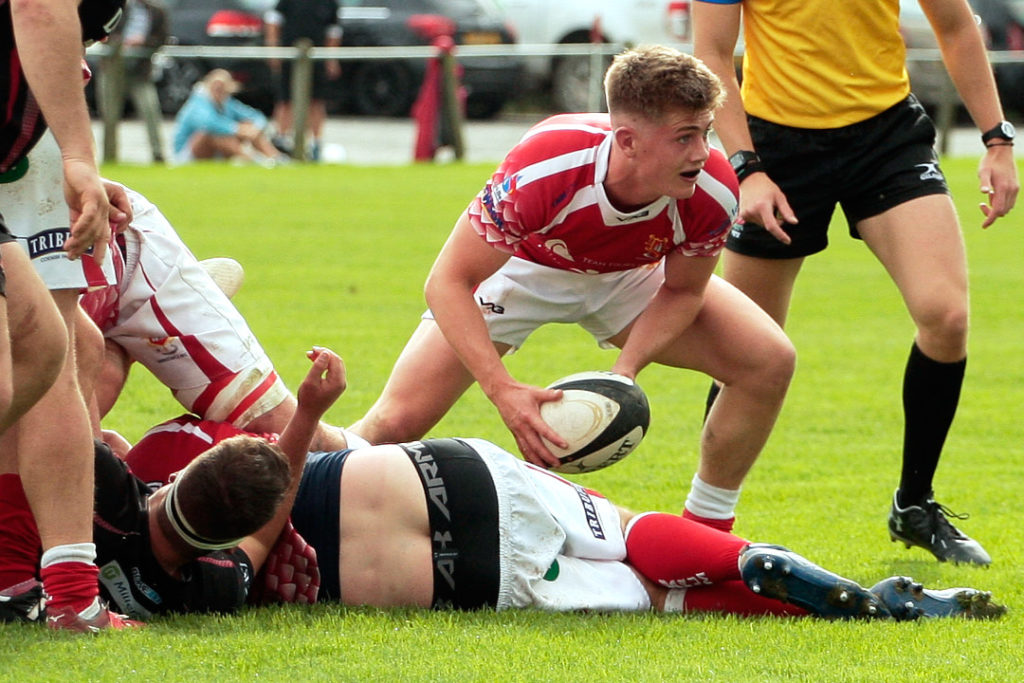 Barnstaple were again missing key players coming into this game with Ryan Carter and Nat Bayet still unavailable but also added to the injury list was Dylan Gosling who came off at Brixham the week before. This gave the Pottington faithful a first look at another promising scrum half Robbie Hume who has also come through the juniors and Colts and what a blinder he played, good enough for Jewson to nominate him as their the Man of the Match. There was also a buzz around the ground before kick-off as news of Ashlee Crouch’s return and with Jake Murphy back in the squad there was some quiet confidence amongst the supporters for this one.

The game itself started fairly evenly for the first 20 minutes as both teams looked to flex their muscle. Barnstaple were already looking to play quickly and if they weren’t offloading in the tackle, which happened often to good effect, they were quick to the ruck supporting each other while the backs ran some good lines to try and open up Camborne. For their part Camborne had several short periods where they pressured the Chiefs defence which again stood firm and didn’t look like buckling. With a penalty each leaving the score at 3 all Ryan Lee collected a clearance and backed himself on the outside skinning the Camborne defence to then pass inside to Jake Murphy who without having to break stride found himself in open space with just the try line for company, an excellent piece of play. 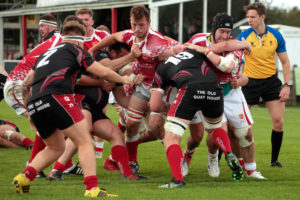 By now the Chiefs were turning the screw with the forwards mounting the pressure on Camborne and after another penalty that was kicked into the corner the Chiefs set the maul rolling only to have it dragged down resulting in a penalty try and Camborne’s first of three yellows. It started to look comfortable now, which is always a danger sign for the Chiefs and sure enough with Camborne down to 14 men and the Chiefs in their territory the intercepted pass was gobbled up by their inside centre to run 60 yards for Camborne’s one and only try of the game, well it is Barnstaple. A penalty kick just before the break reduced the Chiefs lead to just seven as the teams went in at the break 20-13.

The second half was all Chiefs with a fantastic defensive display that did not give up any penalties that would allow Camborne any scoring chances and a relentless attack which did not stop even after the bonus point try was scored. Barnstaple’s third try came from such an attack as the forwards drove repeatedly towards the line sucking in more and more defenders which when Jake Murphy picked the ball up from the ruck had a huge gap devoid of defenders to just dive into for his second and the Chiefs third try of the day.

The bonus point was one for the forwards who as they drove the maul up the field saw an increasingly impressive Brendon Darley peel off from the back of the maul to power his way into the corner for his second try in as many weeks for the Chiefs. By now it was looking increasingly obvious that Camborne were not going to make any impression this half and when Kyran McManus broke clear and fed a perfect pass to Luke berry to leave him clear with just one man to beat for his try the Pottington Faithful were already celebrating. Winston James scored the 6th try from short range to leave Barnstaple winning the game 44-13 and with no points scored against them in the second half.

Photos from the Game 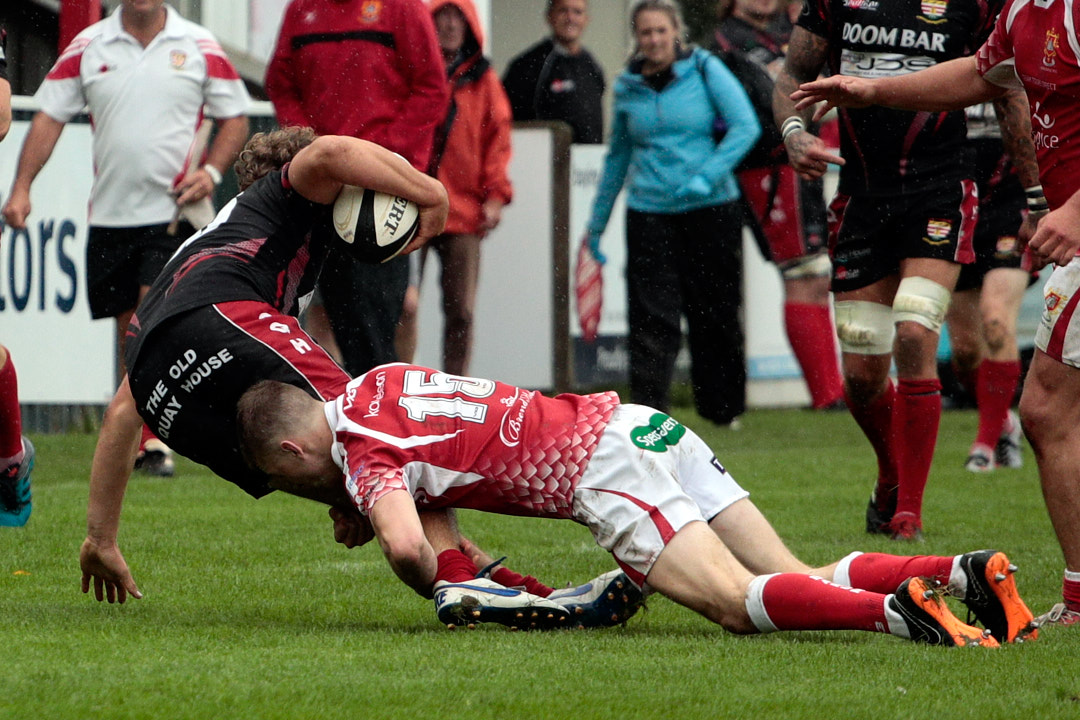 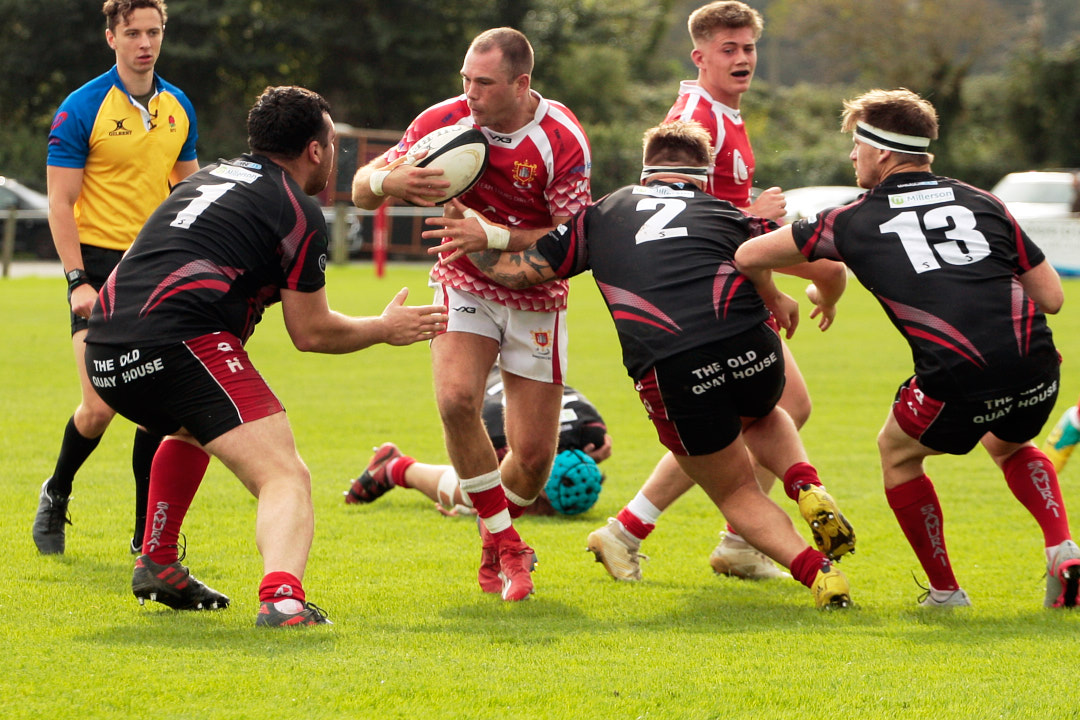 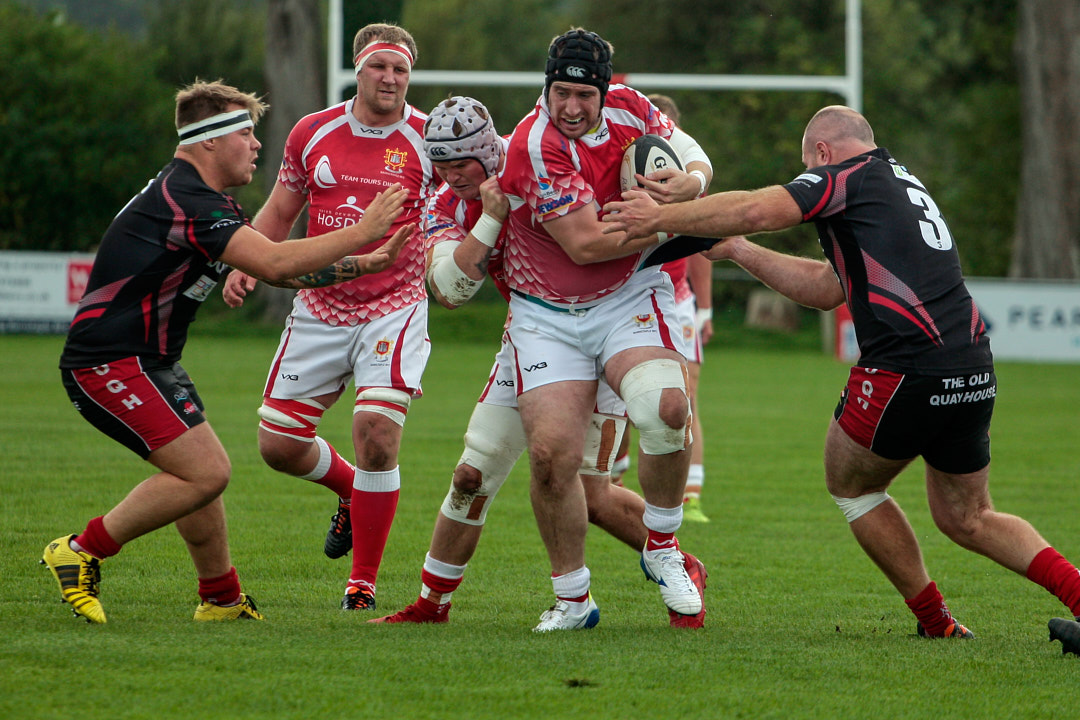 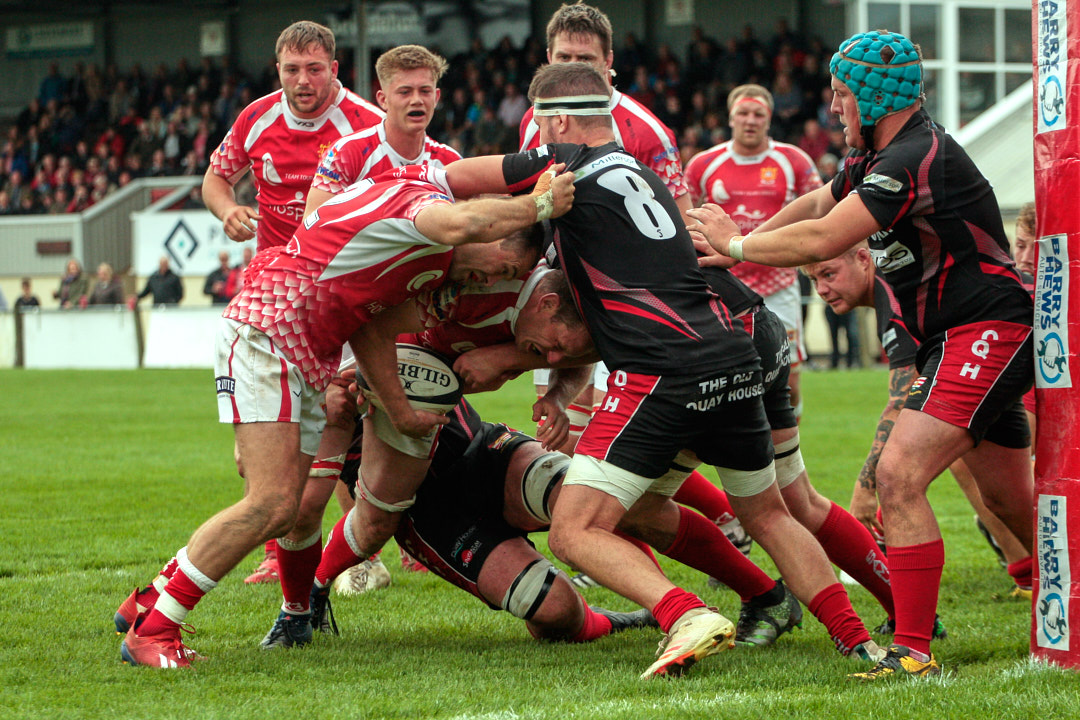 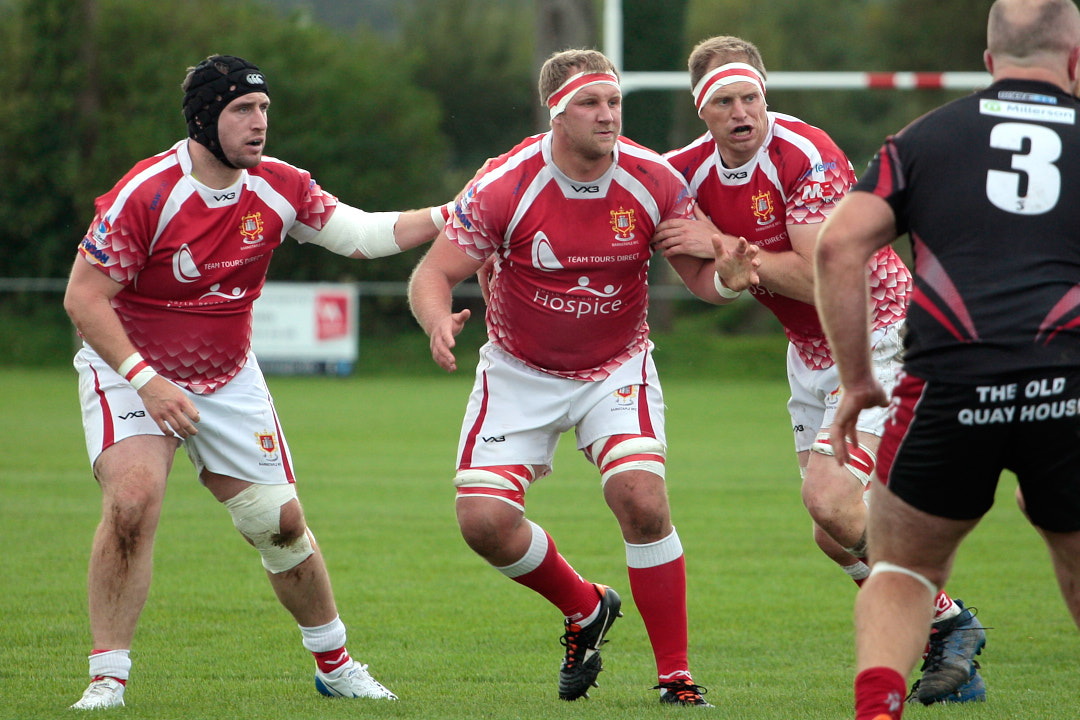 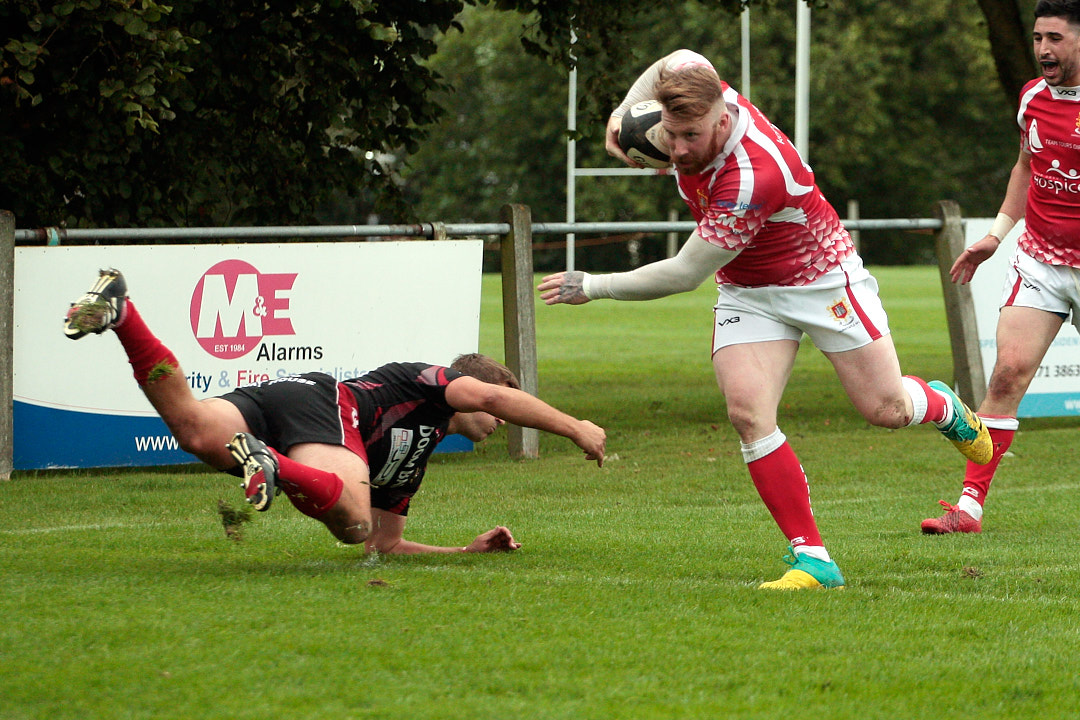 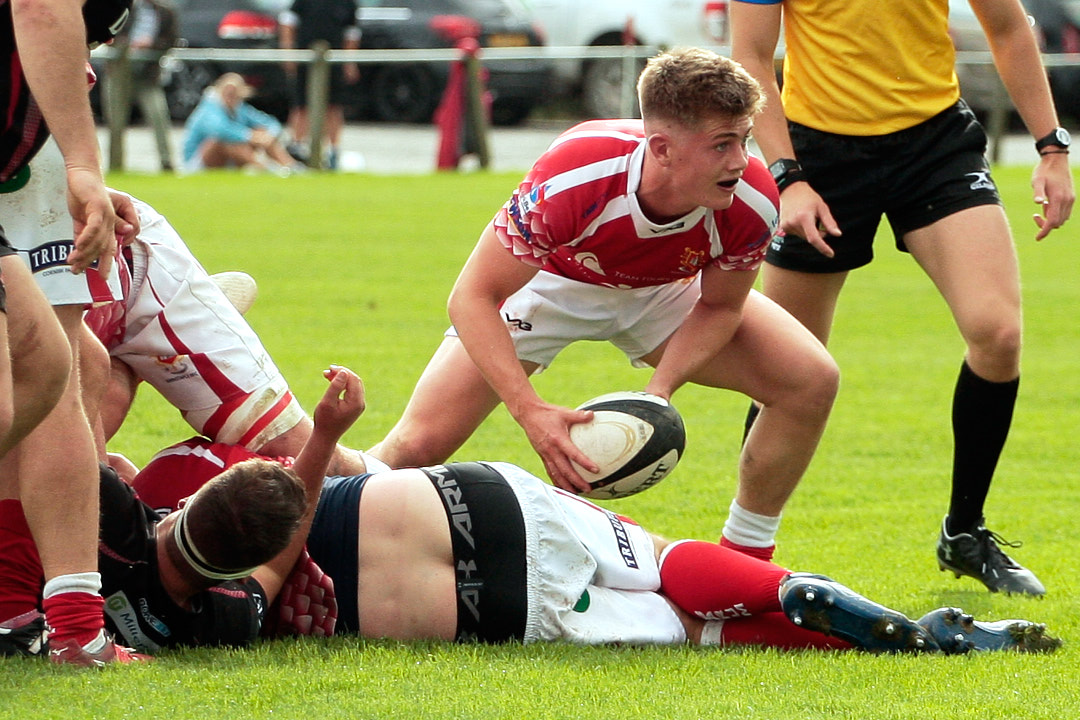 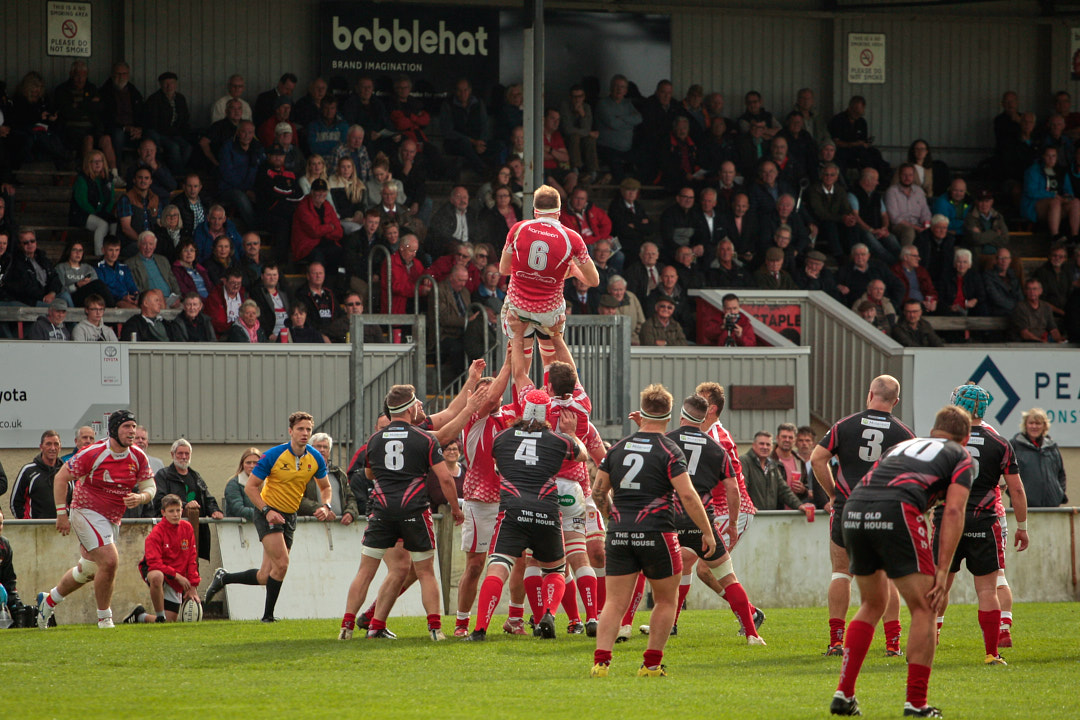 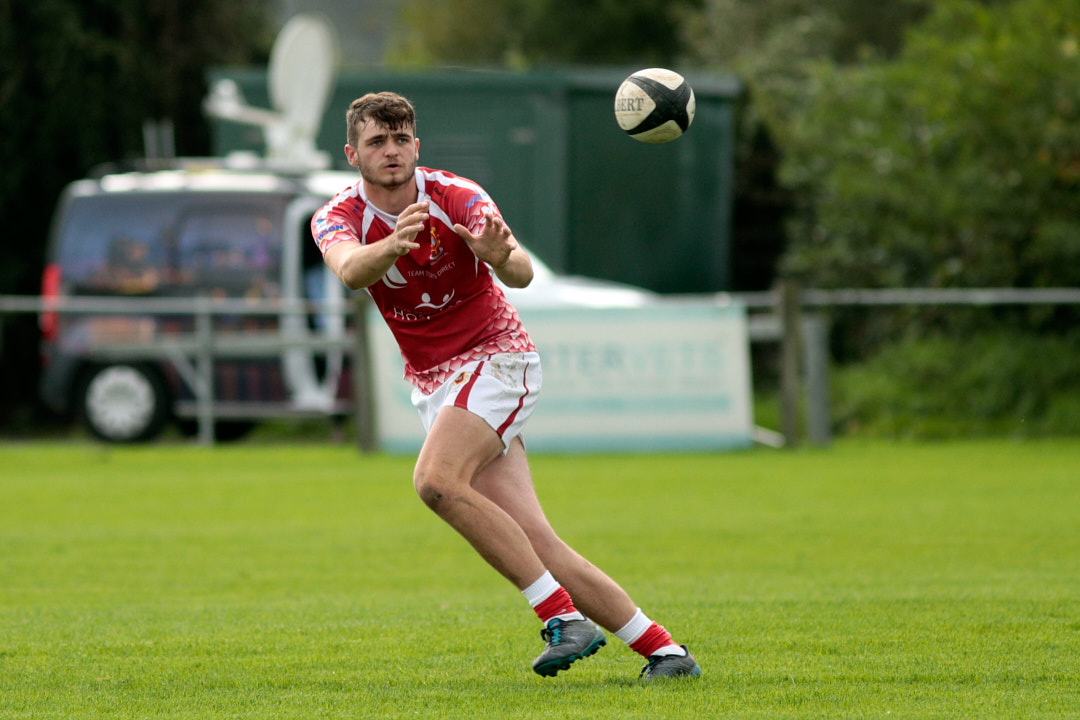 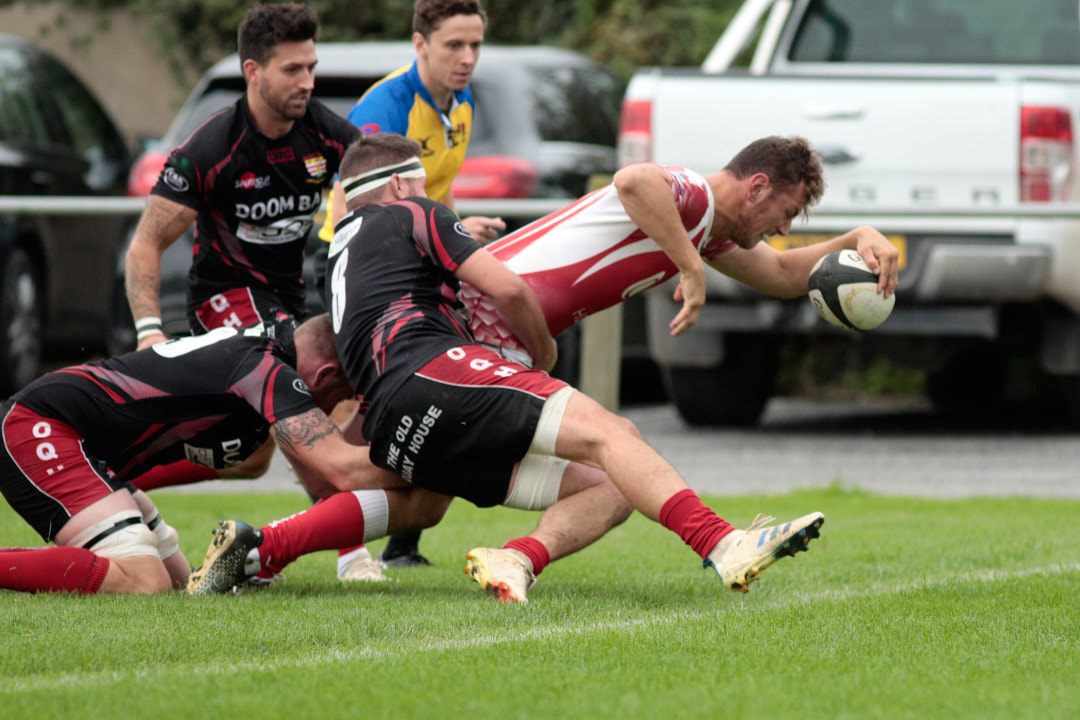 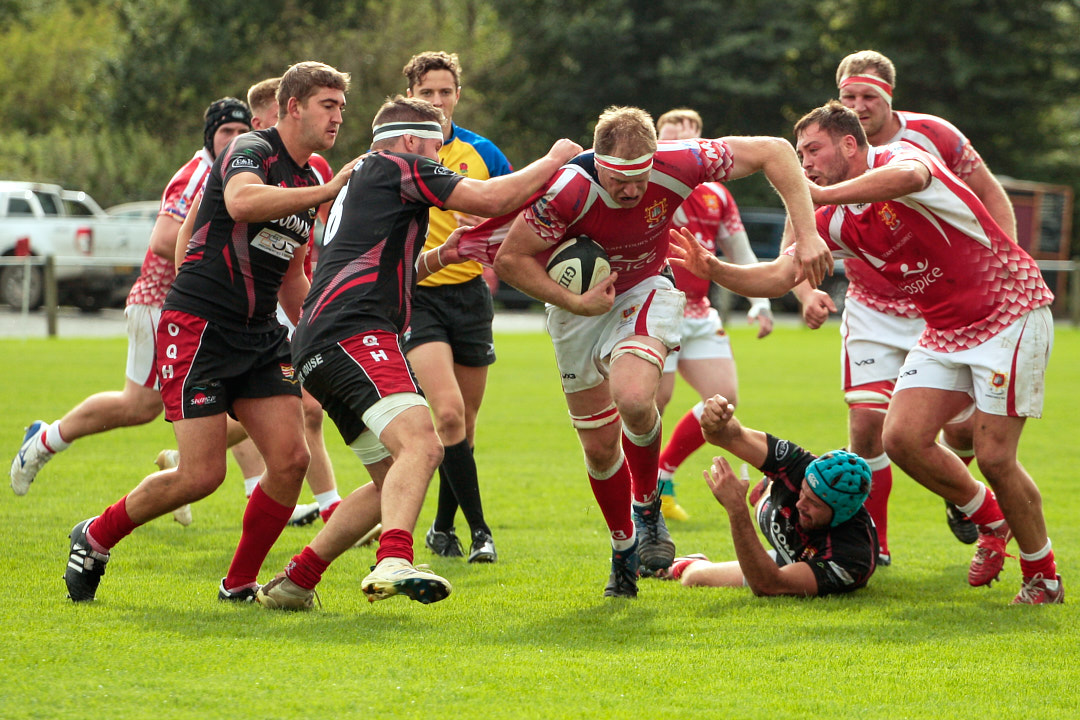 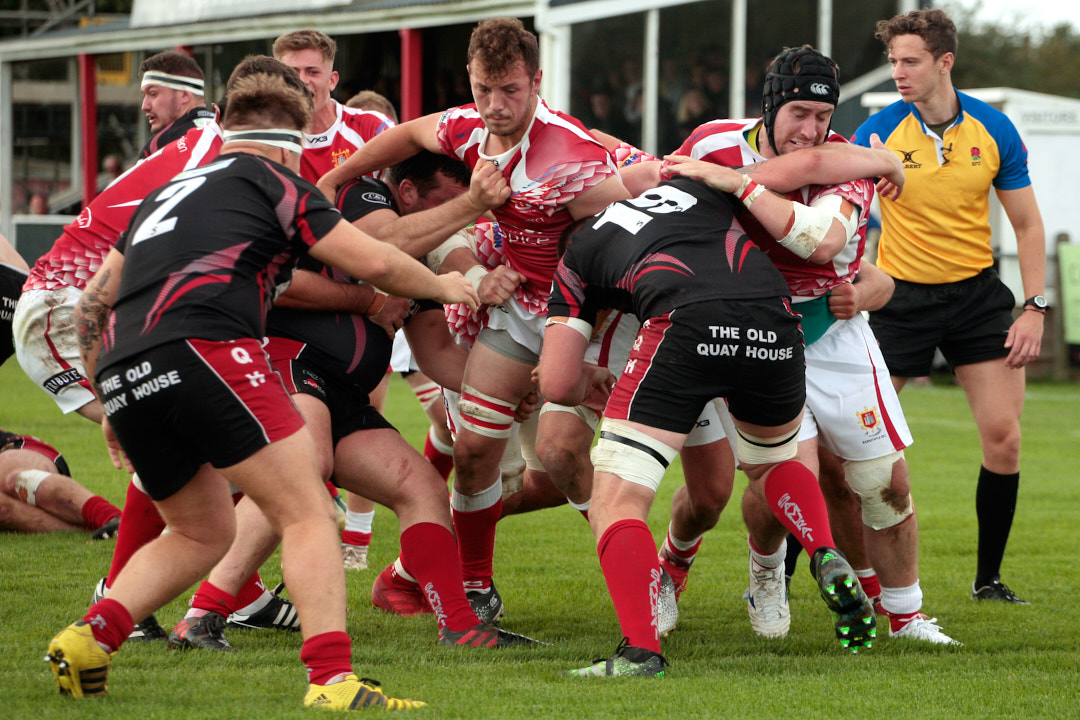 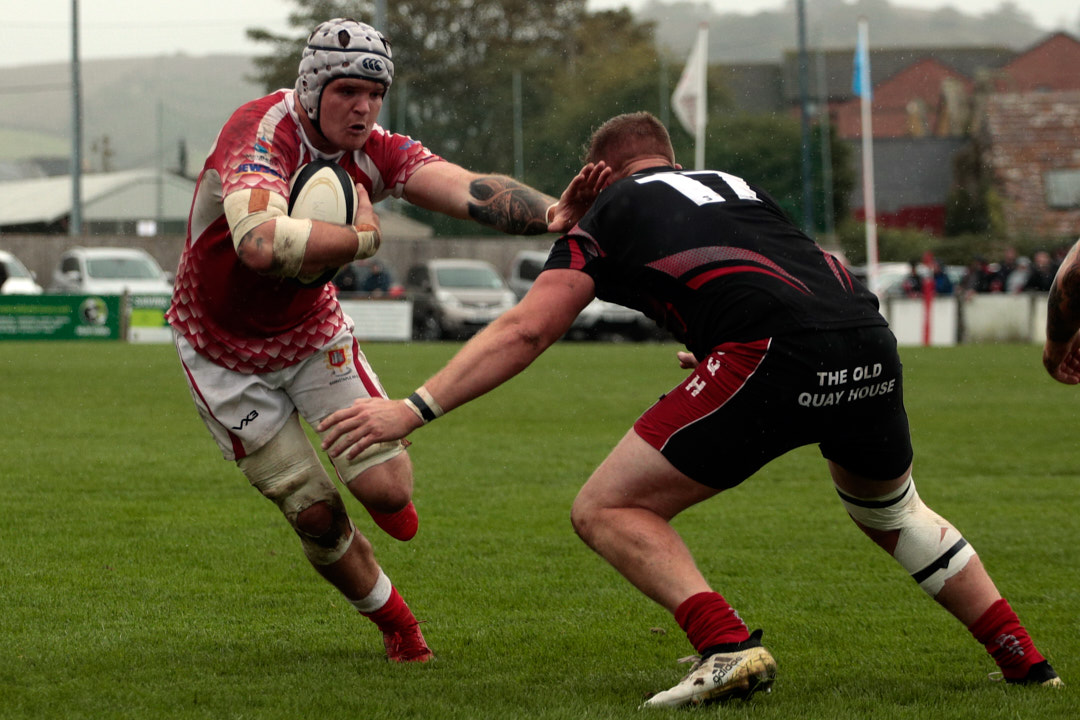 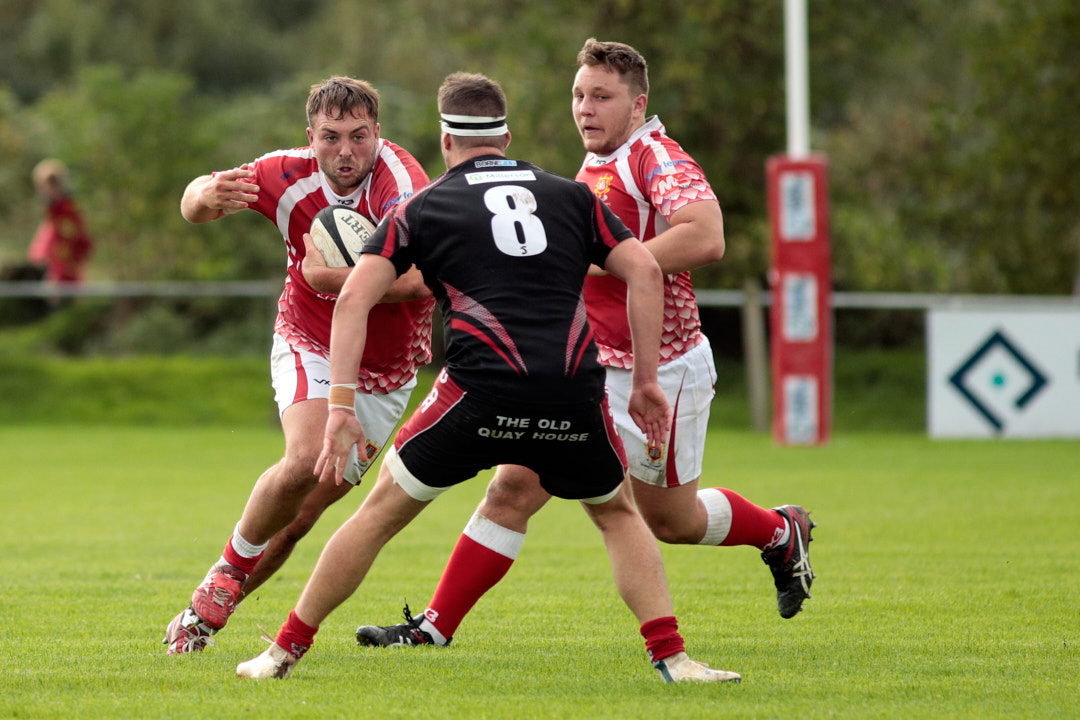 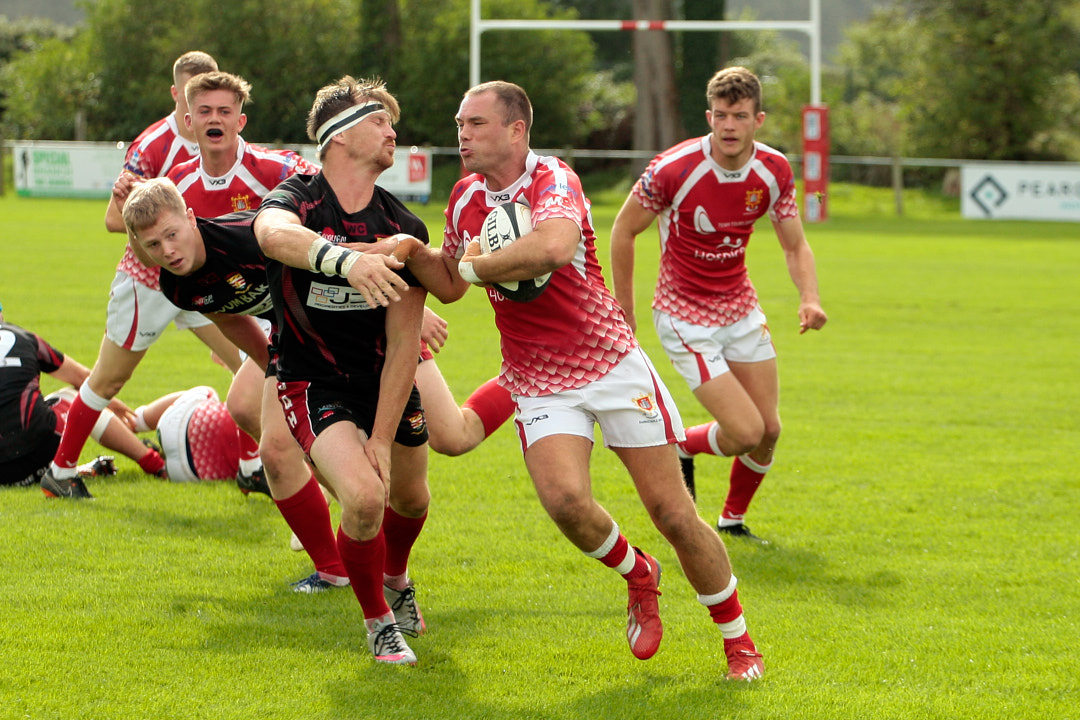 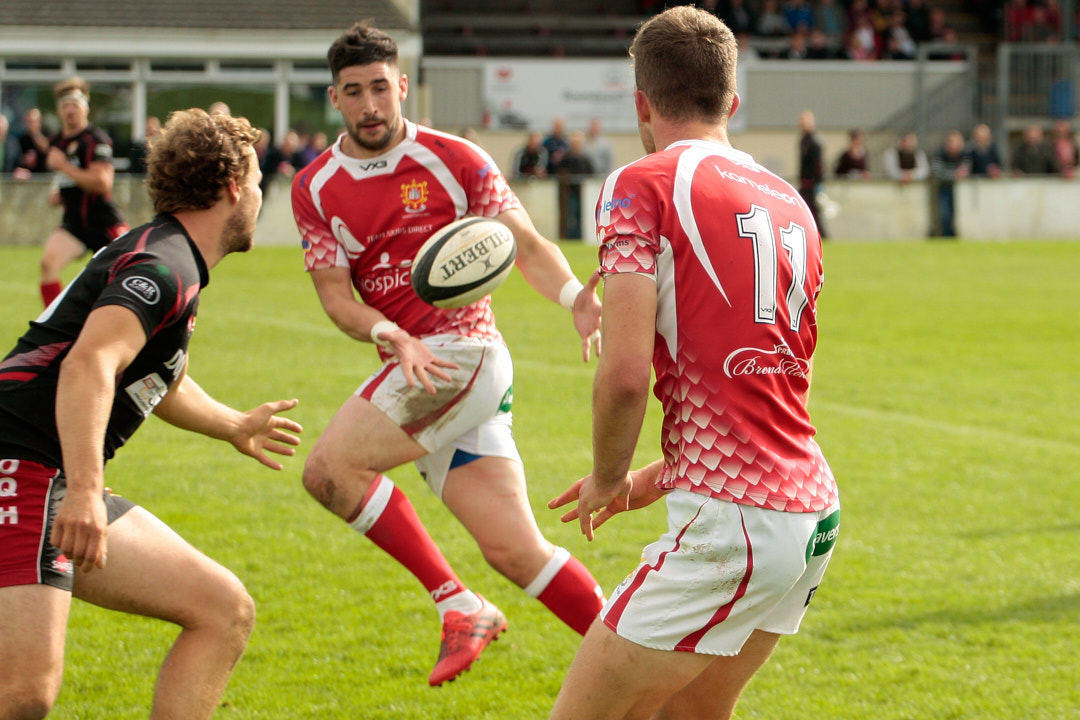 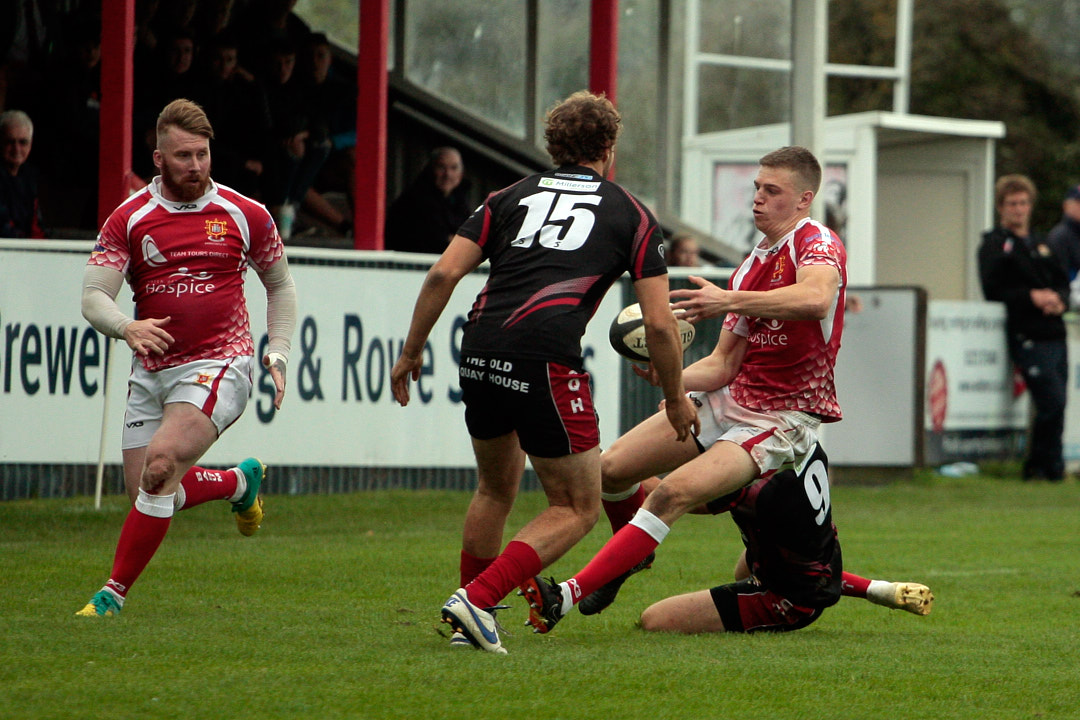 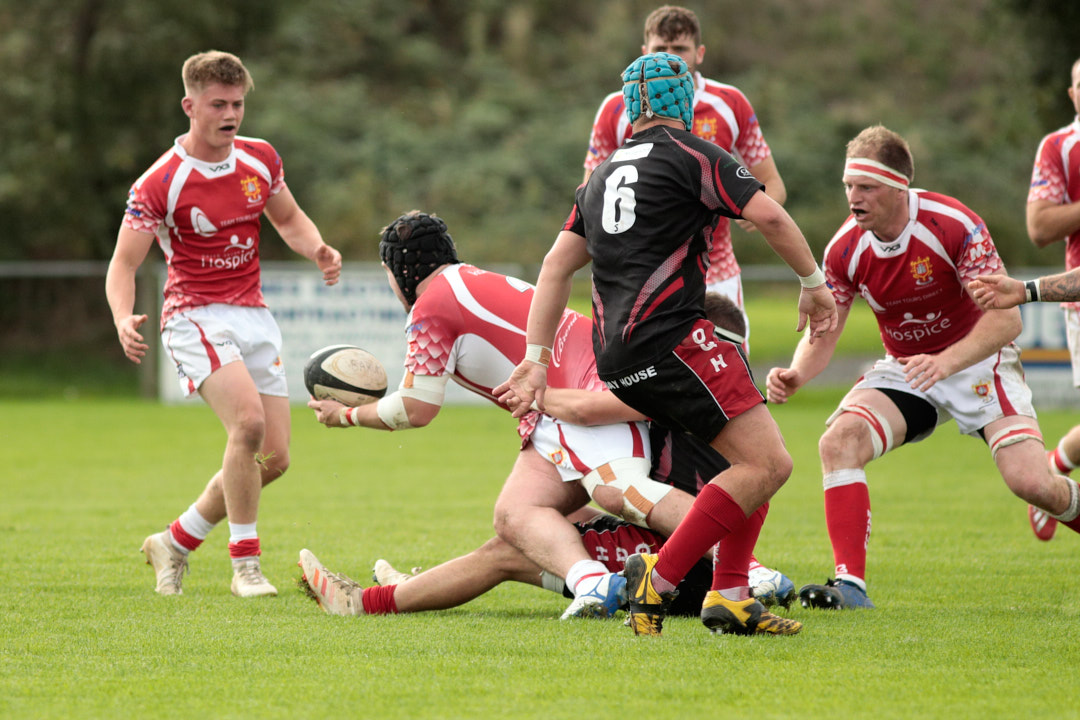 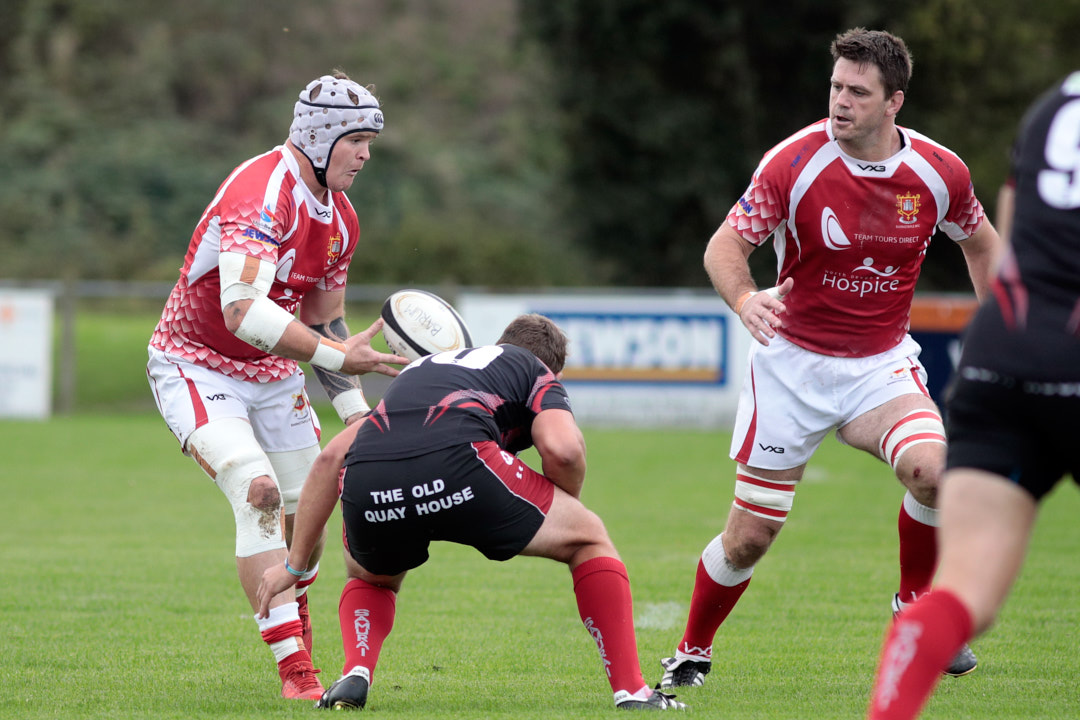 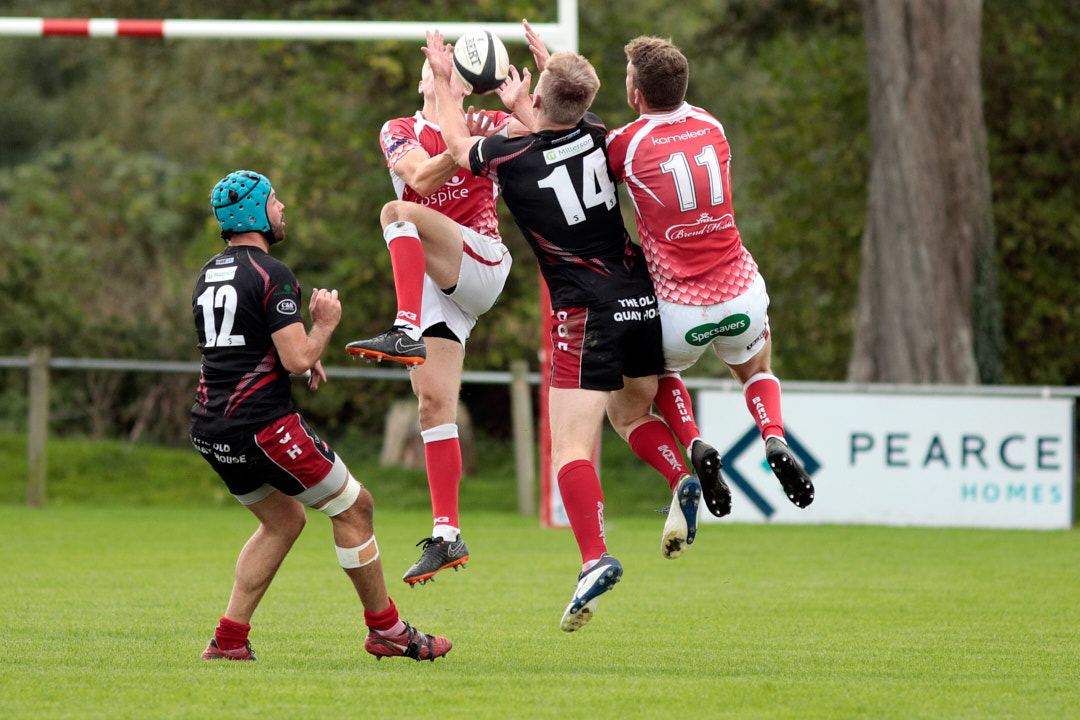 For more photos from the game check

Now before anyone gets carried away there are still much tougher games on the agenda the first of which is a home meeting against a very good Exeter Uni in two weeks’ time and the Chiefs have to travel to Drybrook next weekend, always a difficult place to go to. However what I am enjoying at the moment is this really good balance between the youngsters and the experienced players in the squad which seems to be gelling nicely and with some impressive results. Ryan Lee continues to improve and now has the confidence to back himself on the outside and one moment I loved is how after the penalty try it was the debutant Robbie Hume who was congratulating Winston James’s hard work. If fact he was always in the ear of his forwards working them hard for the yardage. Also encouraging is that head coach Bryn Jenkins still believes there is more to come feeling that the team didn’t get out of fourth gear and that there is plenty still in the tank, which says an awful lot about the potential this team has.

This was however a crazy weekend for results and does temper those expectations we might have as we now look over what happened to everyone else. Ivybridge must be over the moon as they won a massive game at Maidenhead 33-36. In fact Maidenhead’s backs coach and World Cup winner Will Greenwood admitted Ivybridge ‘totally deserved an outstanding away win.’. These two teams will definitely be in the reckoning come April.

The only Devon derby saw Exeter Uni lose at Okehampton and further fuel speculation as to whether they have conquered their poor record on the road from last season, whilst everyone must be looking at Okehampton at home and noting what a challenge that is going to be, especially as Okehampton do have a large vocal support similar to Barnstaple. Both Brixham and Exmouth suffered devastating defeats on the road. More so for Brixham who were demolished 41-9 by Bracknell and one must worry for them if they don’t correct their course soon as they currently only have that very narrow home win against Okehampton. They do have next weekend to regroup before they welcome Camborne on the 12th to hopefully change direction. Newbury Blues will be celebrating their first win of the season having beaten Exmouth 25-15 putting a slight dent in Exmouth’s plans and finally Western Super-Mare back on home soil refound their form to beat Drybrook 17-8.

So there you have it for another week and as you can see from the results nothing can be taken for granted. Next weekend is a tough game at Drybrook which we lost last season 27-19 and it will again take a very disciplined approach to this game to come back with a result.

Don’t forget the next two Saturdays there is breakfast served at Barnstaple Rugby Club as they are showing both England games against Argentina on the 5th and France on the 12th. So get yourself down to the club and enjoy one of Lee’s fabulous brekkies served from 8.30 with the kick offs at 9am