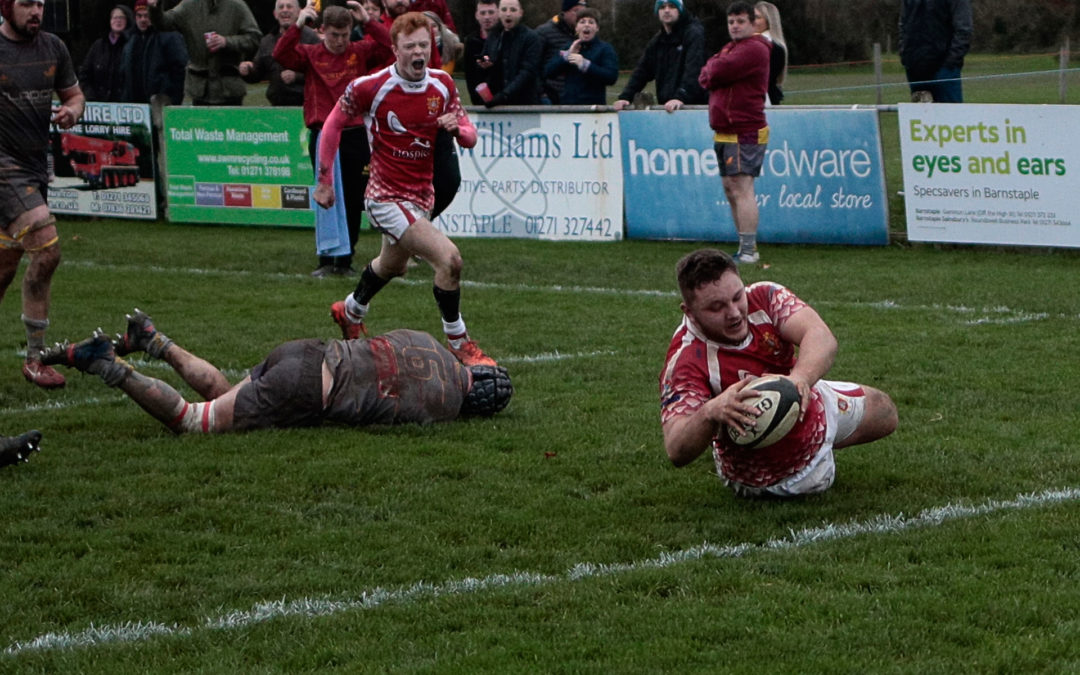 That was a tough bonus point earned in the end although it shouldn’t have been that tough and the match between these two was definitely a games of two halves. The first half both teams looked to play some good rugby running with the ball and in general some good handling. The second half was a different story, it was fractious, stuttering without any rhythm to it and except for the final minute of play not a particularly good half of rugby. 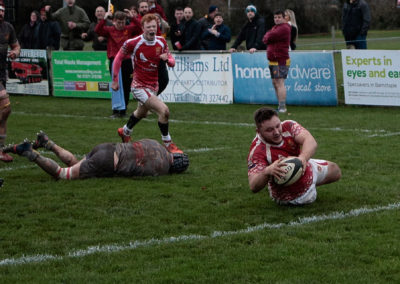 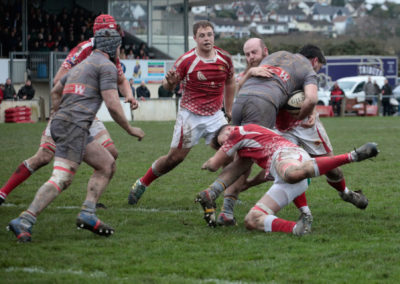 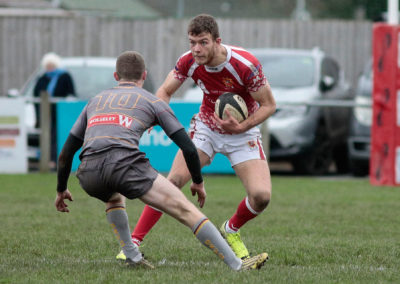 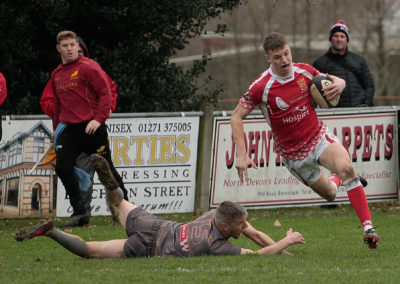 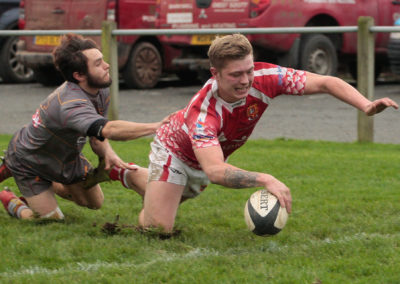 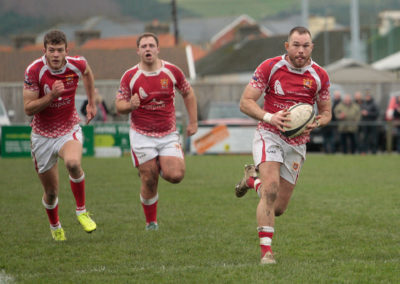 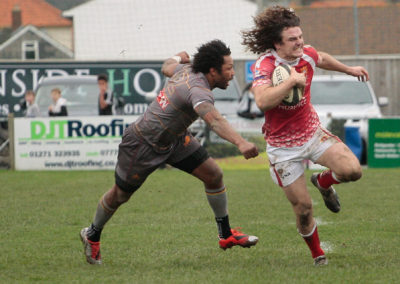 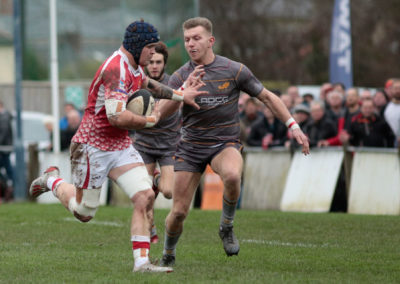 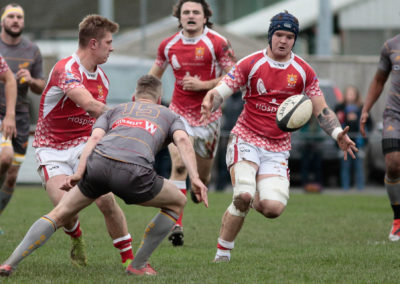 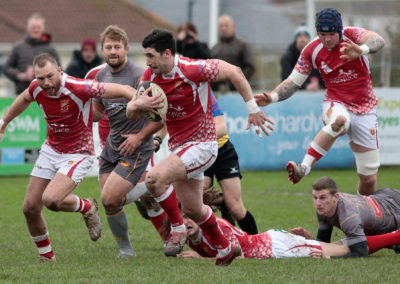 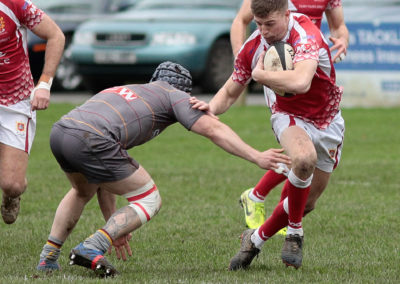 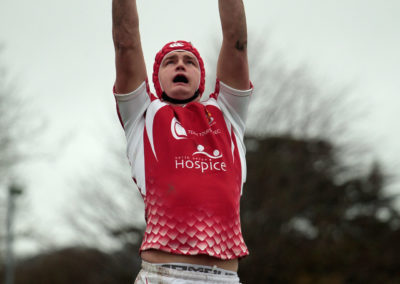 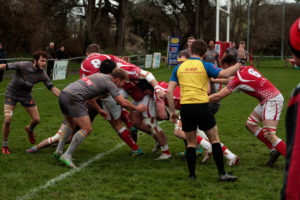 But let’s start with the good and Barnstaple started the half off at breakneck speed and within the first few seconds were on top of Okehampton and pressing. A penalty and then the driving maul from the resulting lineout speed its way to the try line for the Chiefs first score within the first 5 minutes with Winston James claiming it, I’ve lost count of how many he has scored this season. Then it was down to both teams trying to run and probe for openings and on the 20 minute mark a chip over the top of Okehampton’s defence for Jake Murphy to run on to had the two defenders looking blankly at each other and a very happy Jake Murphy collected the bouncing ball to score under the posts. With Kyran converting both that had the Chiefs 14-0 up and looking in very good form.

Just 8 minutes later came one of the best passages of play in the game as Barnstaple took the ball up field with several phases of play. A great break by Ryan Carter got him some way into the oppositions half before he passed to Will Topps who ate up the space and then, wait for it, he passed!! Yes folks Will passed into the waiting arms of Tom Clark who beating 1 tackler dived over the line to give the Chiefs a 19-0 lead and all eyes were now on that all important bonus point. At this point it looked like the Chiefs were cruising, their defence ate up everything Okehampton threw at them and there was very little threat to their try line. But that was when things changed as, believe it or not, a deliberate knock on left Okehampton with 14 men for 10 minutes and for some reason Barnstaple just completely relaxed and left Okehampton camp in their half attacking consistently. Again Barnstaple’s fantastic defence gave no quarter and ended the half still 19-0 up. 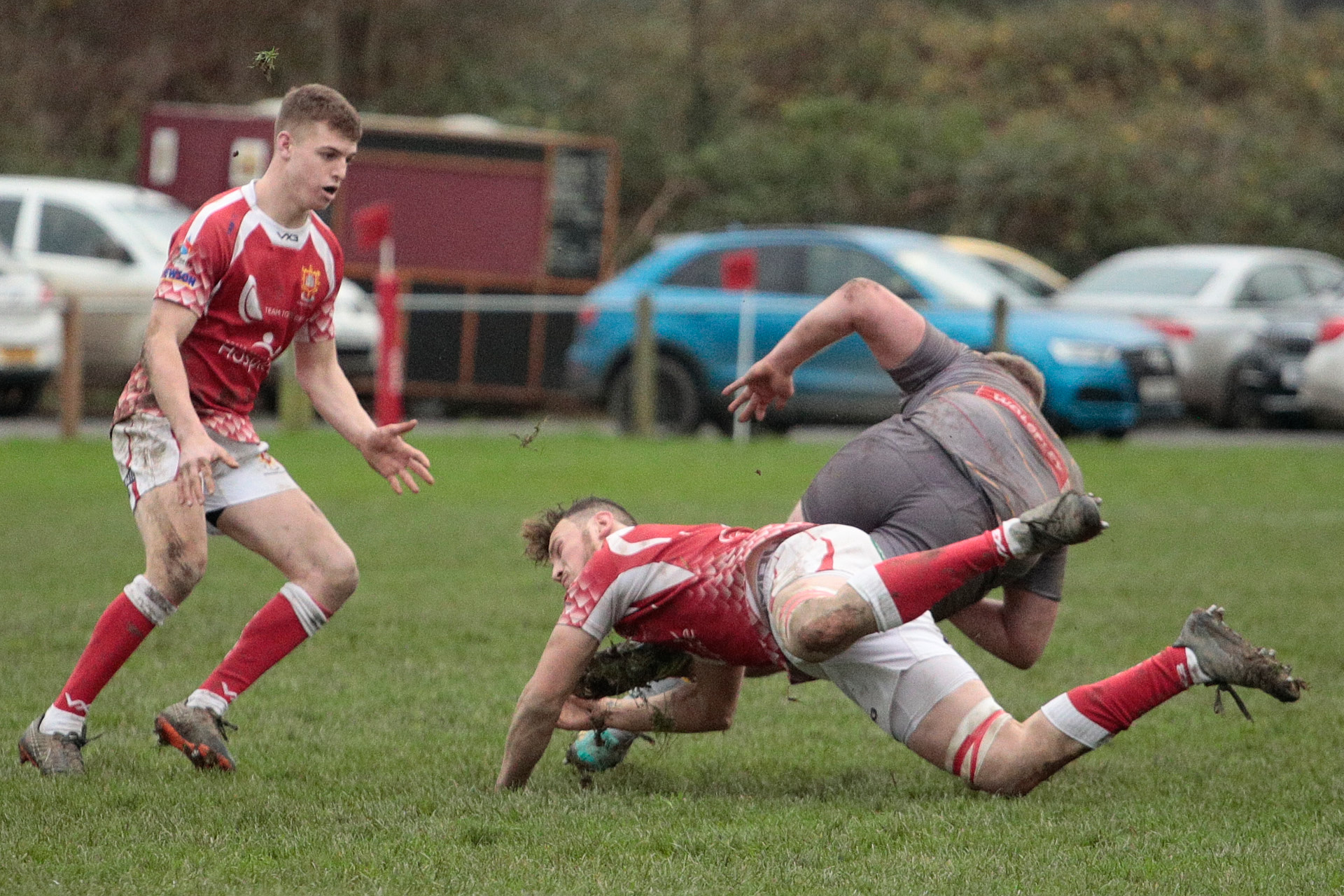 And that looked the likely score for the end of the game as the second half descended into a squabble rather than a game of rugby and was not pretty to watch. For some reason the Chiefs do seem to let teams get under their skin at times and so it proved today, just like it did in the second half against Exeter Uni and against Ivybridge. This was emphasised when both Winston James and Okehampton’s no. 12 were yellow carded for handbags away from the play. The game became fractured and quarrelsome as the half went on and I’m sure the stop start nature of the second half did nothing to improve the game which by now had to all intense and purposes became something of an arm wrestle with Okehampton having too much ball in the Chiefs half. They didn’t really do much with it as Barnstaple again repelled everything they threw and that was a great defensive display all game by the Chiefs. The Chiefs nearly got that bonus point towards the end of the match when they finally got some rhythm to their play with Ryan Carter driving for the post only to be denied as the ref had judged he was held up.

Then came to moment of the match when the Chiefs had a penalty at full time and elected to make one final push from within their own half for that bonus point. Now with their heads back in the game, when Barnstaple get everything right it is great to watch, they produced phase after phase to work their way back into Okehamptons half. Now within five meters they pushed hard to try but credit to Okehampton whose defence was superb and stopped every close range attack. It almost looked like they would keep the chiefs put when Martinas ran towards the blindside behind the scrum half calling for the ball and running on to it at pace 5 meters out to break three tackles and dive over the line for that all important bonus point. 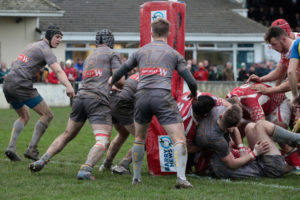 So what do I think about the game, mostly I think it’s a positive performance especially after the game up at Newbury. It would have been easy for the Chiefs to let their heads drop after that one but they are a better squad than that. Despite the disappointment of the second half and allowing the game to become fractured, yes I know these things do happen and you can’t always be in control of it but when it does I do think patience is the order of the day, keep the ball for 10 or 20 phases and let them lake the mistakes, 19-0 up we don’t have to make the errors and it’s up to the opponents to force the play. Defensively though well the score speaks for itself, Okehampton just couldn’t get through us.

The scrum did struggle at times but that’s no surprise when you see how many are missing, but again they held their own and did well. Of course Ryan Carter definitely earned his man of the match with a cracking performance and Matt Gohl looks like he is getting close to his best with a really great game. In fact they all had a good game, in particular the youngsters are continuing to improve week on week and displayed some good qualities out there, Remember this Okehampton side are a good team and they did press us quite a lot and could not find a way through that defensive wall and that’s a first for them this season. They have also beaten some good teams, including Weston Super-Mare two weeks ago 23-20, albeit at home. So to shut them out in the manner that we did was a good result in anyone’s books. Now it’s on the road for the Chiefs before Christmas with a visit to Weston Super-Mare next weekend and then Bracknell and so let’s see how the rest of the league did.

Of course WSM didn’t play as it was their rest week and so Barnstaple have now stretched their lead to seven points, that’s how important the bonus point of Martinas’s was. Third placed Maidenhead took a thumping at Brixham as they lost 24-7. Not only do Maidenhead seem to hate coming to the West Country but Brixham’s resurgence is definitely more than a fleeting glimpse and they are going to be a tough team to beat for the rest of the season. That has allowed Camborne to return to third place following their Cornish derby win over Launceston 27-20.

The Devon derby saw Exeter close the gap on the top four with a 31-26 win over Exmouth. Exmouth must be getting worried now as that is their fifth loss in six games which now sees them drop to tenth place just 4 point off the relegation zone. Drybrook had a cracking home win over Ivybridge 23-20 to pull them above Exmouth while the battle near the foot of the table went to Bracknell in a close game 26-21. And that about sums up the league this weekend and it has been fantastic as far as Barnstaple are concerned but stay tuned as we have some even better news concerning Barnstaple Athletic. 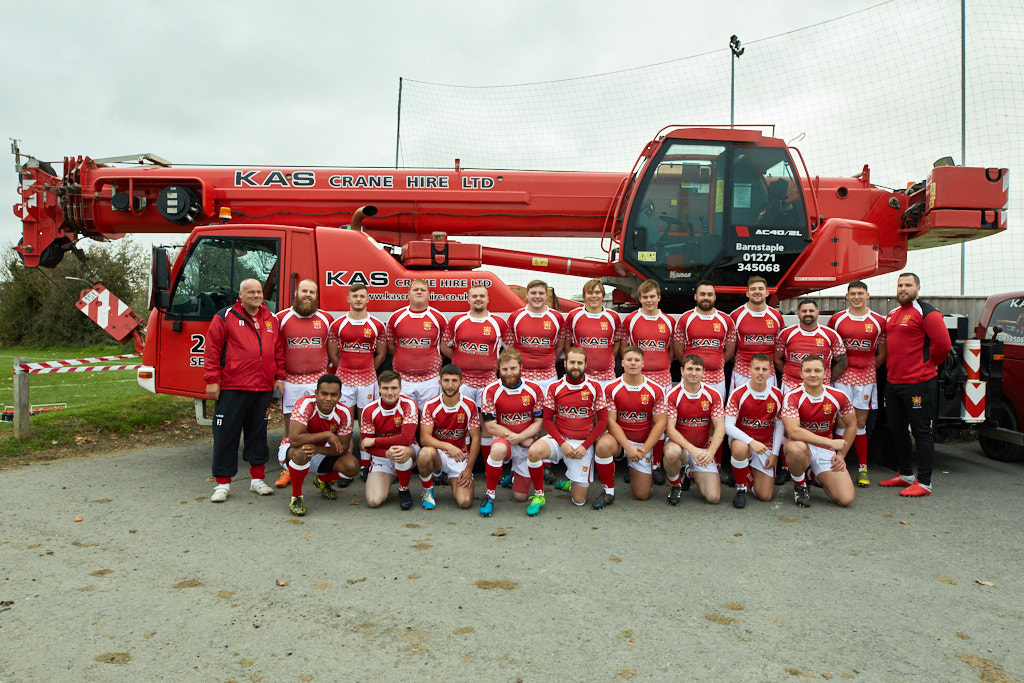 Athletic were on the road yesterday down to Okehampton in a rematch of the title decider from last season were the honours and title went to the home side. So there was a lot to play for not least a bit of well fettered revenge and so it proved as Barnstaple Athletic came home Saturday night 14-26 winners with all five points and following Devonport Services surprise defeat at Tiverton are now Merit Table 1 leaders and of course all the pressures that come with it. Here is Head Coach Scott Warren’s assessment of the game.

Okehampton is never an easy place to go let alone come away with all 5 points. We knew the challenge that was set for us losing the league down there last season by 3 points we had a massive point to prove and the boys really had to step up and accept the challenge. With only 8 forwards available the pack knew we would have to graft hard and grind a win out and I thought we did that outstandingly well. The back line had really good balance and that showed with line breaks and tries. First half we fully dominated Okehampton up front, in the contact area and at set piece which we said was a target for us before the game. We stuck to our patterns, didn’t slip into their way of playing and that proved too much for them. The boys deserved that result and went out there worked incredibly hard for 80 mins and come away with all 5 point sending us to the top of the league. We will take massive pride from that performance and we will be backing it up at home next weekend for the last game before Christmas!

Following Devonport’s loss that now leaves Athletic three points clear at the top with just one more game before Christmas and that is at Pottington Road next Saturday against Teignmouth, kick off is 2pm. Just a couple of facts for you concerning the Tic’s before we move onto the colts. So far this season they are not only the top scorers in their league with a total of 380 points from 9 games but also they also have the best defensive record in the league conceding just 118 and 59 of those were against Devonport back in September. If they can keep this pace up and continue to produce really good rugby then they might just regain the title but there is still a long way to go this season and with Exmouth just 9 points behind in third place and two games in hand it is still going to be a tough fought season. 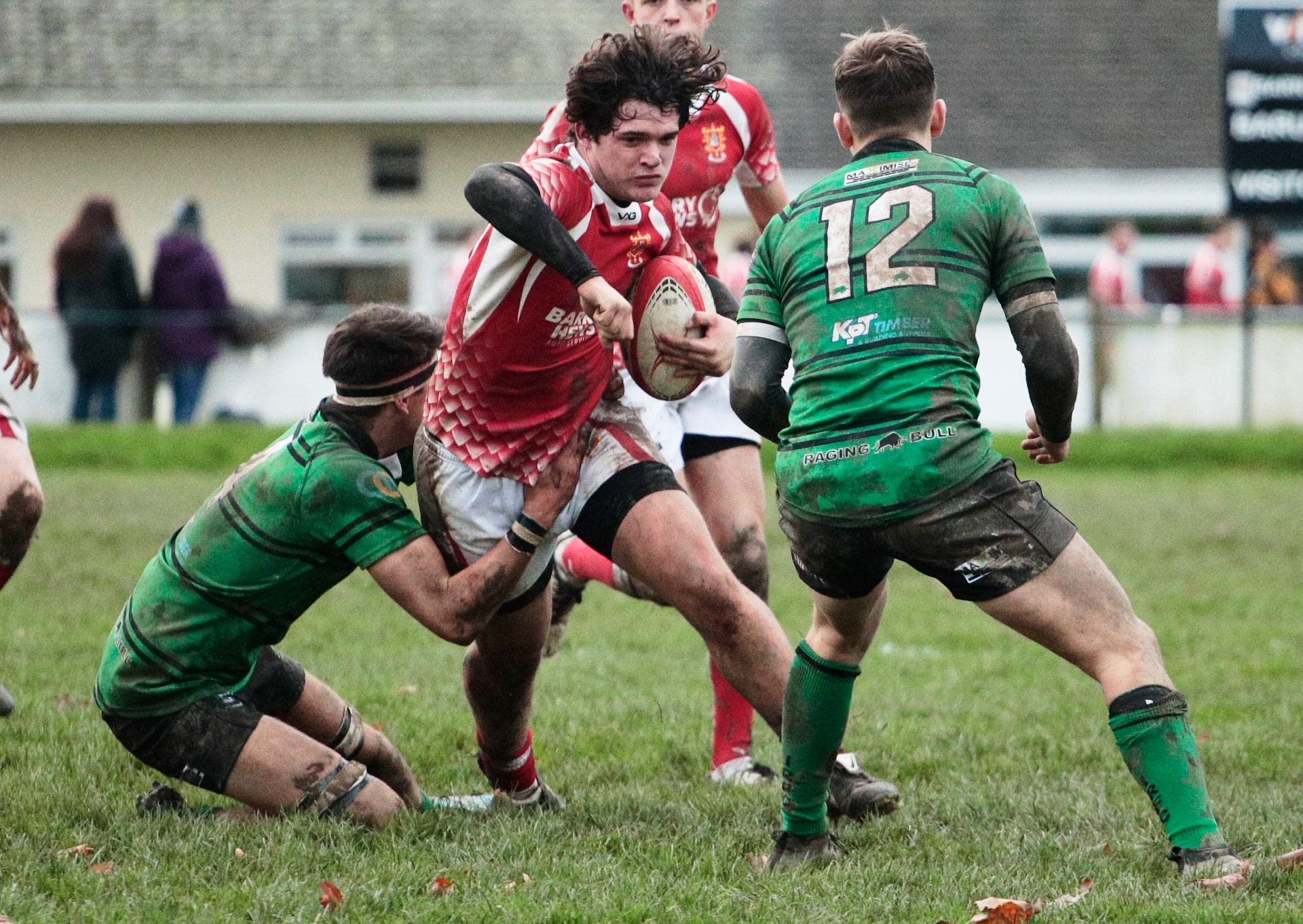 The Colts were also on the road on Saturday, a trip to Brixham, their final friendly before league action resumes in two weeks. What the coaches were after was for the Colts to follow on from that great win at home against Ivybridge and continue the momentum before a crucial league match at Potting Road on December 21st against Cullompton. And they didn’t disappoint winning 21-7 against a very physical side but the Barnstaple Colts were on fire and didn’t put a foot wrong all game and came away with a great result that will surely help their confidence going into the next match.

That’s it for this week well done to all three sides for very good wins against good opposition, onwards and upwards as they say and I’ll see you all at the Tic’s game this coming Saturday. Don’t forget that the Chiefs are back at Pottington Road before the New Year when they face Bideford in the Boxing day match kick off is 2pm.