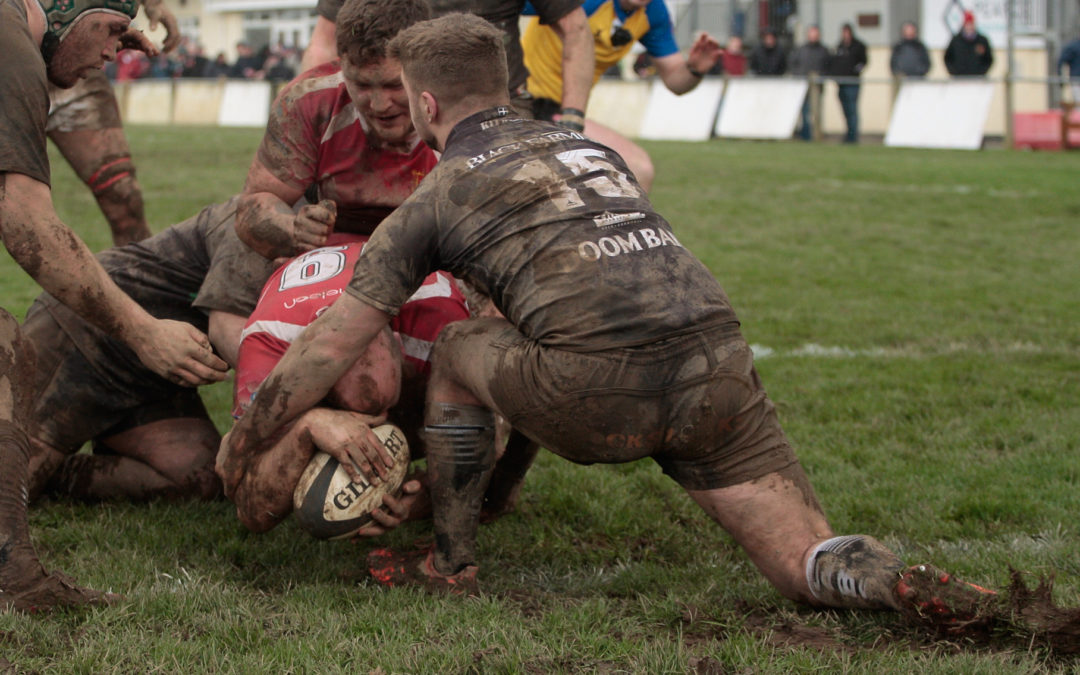 What an ugly game of rugby that was, I did say that the biggest threat to both teams, and I should of added rugby itself, would be the conditions and boy they didn’t let us down. Cold hands trying to hold on to a muddy bar of soap, heavy energy sapping mud slowing the game down to an almost full stop at times and the odd shower of freezing hail did not make for an entertaining game. Mind you Barnstaple didn’t do themselves any favours giving away penalty after penalty and thus not mounting any significant sustained pressure on their opponents because on the few occasions they did just that the Chiefs inevitably scored, but it was difficult out there and both teams did well to cope. 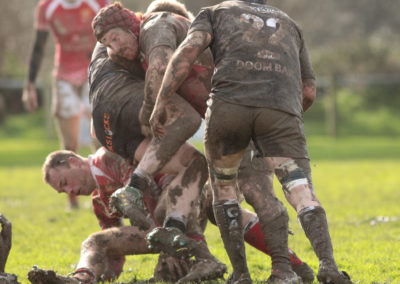 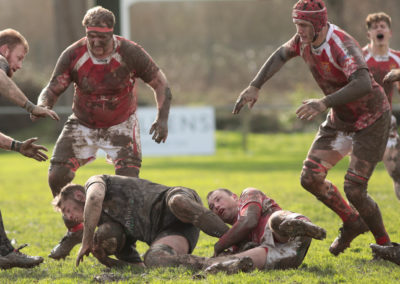 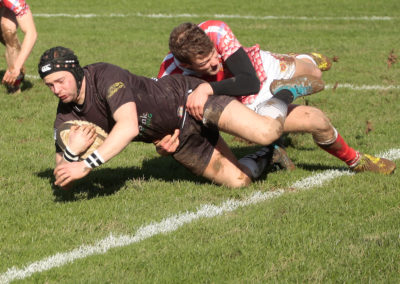 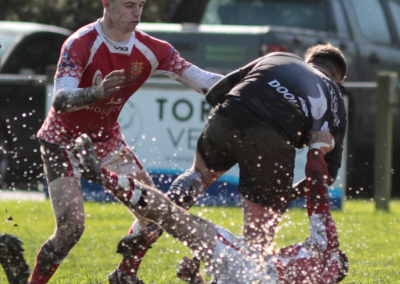 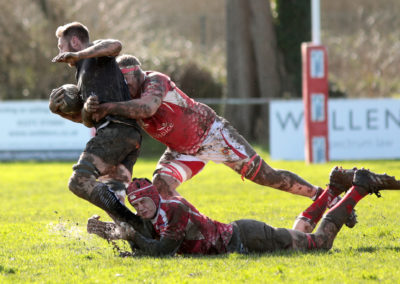 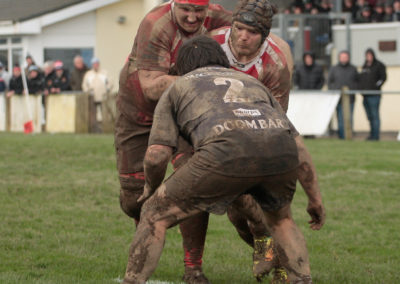 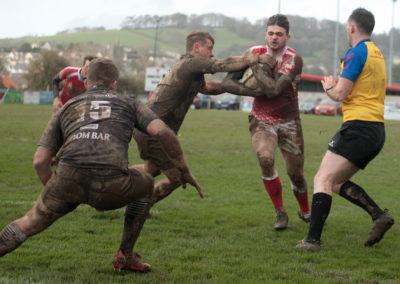 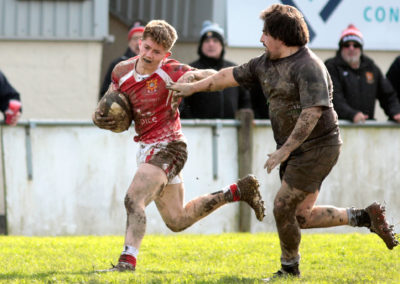 Launceston as expected were a much improved side and for the first half had the majority of the possession, unfortunately they made very little headway going from side to side with little penetration and that was thanks to the fantastic work of Barnstaple’s defence which was again at its best. Even when the Chiefs went down to 14 following Matt Gohl’s yellow the Chiefs held the line. With the wind behind them the Chiefs made the early start with a penalty in the first 10 minutes and with another at the 30 minute mark went in at half time 6-0 up. 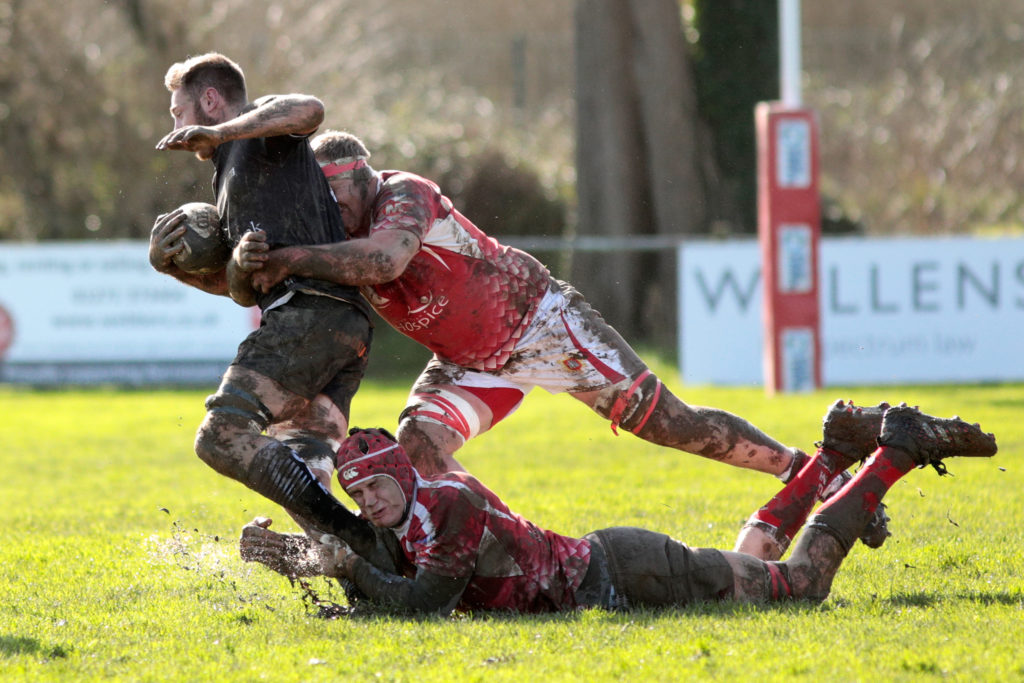 The second half followed much the same pattern with Launceston having more of the possession without doing much except for one foray beyond the Chiefs 22 but even after Starkey became Barnstaple’s second yellow card of the day the Cornishmen could not find a way through Barnstaple’s defence and the Chiefs were able to turn it over. Launceston did get a penalty during this period and successfully kicked it to get to within 3 points at 6-3 but when Starkey returned to the field the Chiefs finally got their game into gear as they attacked Launceston’s 22 for the first time in the second half and following successive drives following a series of penalties Josh ‘Jager’ Davie crossed the line for his first try for Barnstaple Chiefs and the only try of the game. With time running away Launceston settled for another penalty kick to secure for them a losing bonus point and that was that, not a game to remember.

But well done to Barnstaple for sticking to a game plan and being patient, pity about the discipline though, it got them the win and points in the bag is what it is all about on a day like this when entertaining rugby is just something we are not going to see, roll on the spring. Launceston deserved their point even though they could not find a way through the defence of the Chiefs, as many others have found, they put up a good defence of their own tackling hard, they also bossed our scrum for much of the game and they did have the better of the possession throughout, it was just the Chiefs made better use of theirs when they had it and the Chiefs fitness in such sapping conditions was the difference as the final whistle came in sight. 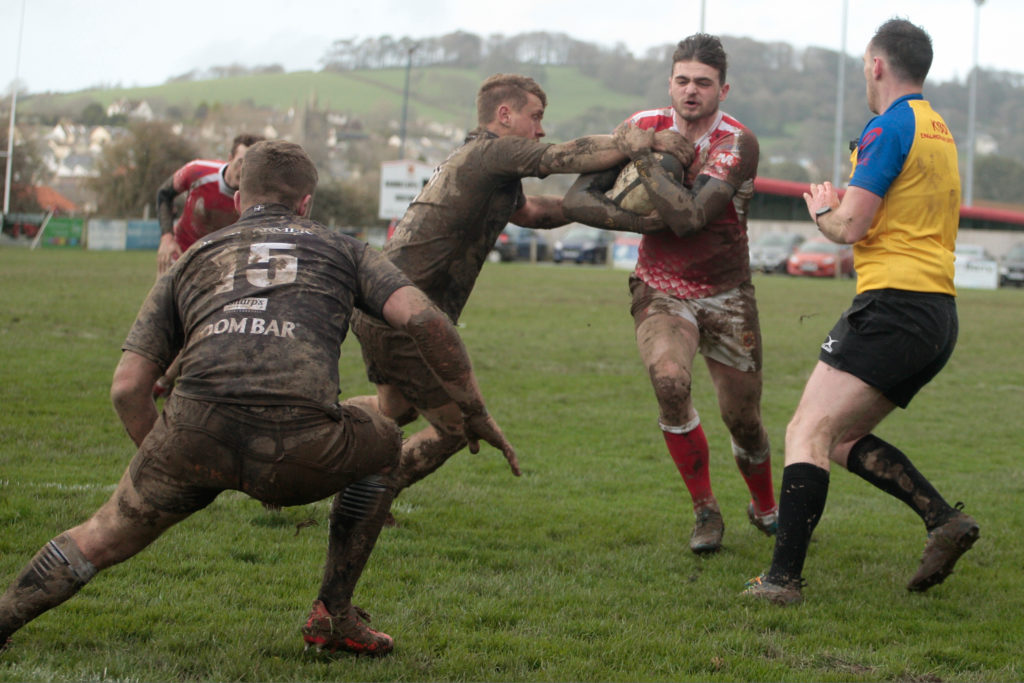 This now leaves Barnstaple 24 points clear following the postponed Weston Super-Mare v Maidenhead game, just as important was the dropped point by Brixham who only managed an 18-12 win over Exmouth which hurts their chances of holding the Devon Senior cup at home providing they get through and increases Barnstaple’s chances of hosting. Exmouth however now find themselves just 4 points from the bottom of the table as Launceston’s bonus point opens up a four point gap to the safety of 10th place.

Bracknell got an unexpected 43-18 win over Ivybridge although it has to be asked if Ivybridge are saving themselves for their Devon clash against Brixham next week which is a must win game for them if they harbour any hope of being in the Devon cup final. Whilst Okehampton returned to winning ways at home beating Newbury Blues 19-12 and Camborne got a very welcomed boost by beating Exeter Uni 36-5, their first win of 2020.

That’s it for this week’s results round up with both Athletic and Colts games called off. Next week is a very crucial game as the Chiefs travel to Maidenhead hopefully to end their challenge for the title, a difficult game on artificial turf and the chiefs are currently 0-2 on these surfaces this season so keep those fingers crossed for better weather see you all next weekend.