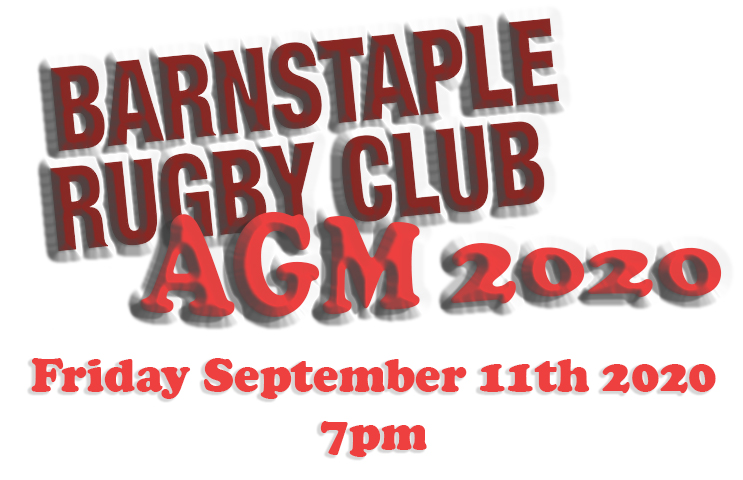 Evening everyone and welcome to another update as we approach the end of July and into August, the month usually full of anticipation of what the coming season may have in store and whilst I can no further predict what is in store there is some very important news for every one of which the first is that following the first in person full committee meeting which was successfully held last Monday (20th) the date of the AGM has now been set, which will take place at 7pm Friday 11th September 2020 at Barnstaple Rugby Club.

Now before we get into the details Barnstaple Rugby now have their own face masks for sale through the VX3 Club shop which you can reach through this link. They cost £6 each (inc VAT) of which BRFC gets £1 so the more of our supporters buy them they richer we all will be. Support your club, buy a BRFC mask to go shopping and the club gets £1. 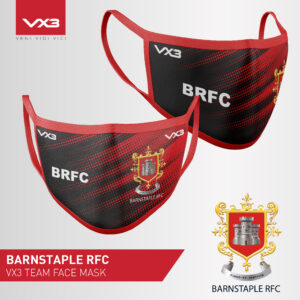 Now back to the AGM and this is great news for all you members and even better ALL CURRENT MEMBERSHIPS will be extended until September 12th 2020 so as to include the AGM so I encourage all of our current members to get down to the club on the 11th and have your say, ask questions and find out how well our great rugby club is doing, I think you will be pleasantly surprised I know I was at the last full committee meeting. I do understand that many of you will be apprehensive to do this given the Covid-19 pandemic is still a massive concern but rest assured that our Covid-19 officer Geoff Boxer will be ensuring that the full guidelines and pandemic strategies will be observed and strictly adhered to for the AGM to keep everyone safe.

Additionally there is also the chance for any member to put themselves forward to join the full committee and help to shape the future of Barnstaple Rugby. If you are interested in putting your name forward then contact the club either by email at info.barnstaplerugby@gmail.com or in writing by addressing your request to Alan White Barnstaple Rugby Football Club, Pottington Road, Barnstaple, EX32 1JH.

Not interested in the committee but still want to help then why not become a club volunteer as there is plenty to help out with and we are always on the lookout for people with energy and enthusiasm to help keep the club stay in shape. In particular we are looking for anyone who can help out with Health and Safety, Safeguarding or fundraising. If you think you can help in these areas or just want to volunteer then again please contact us at info.barnstaplerugby@gmail.com. 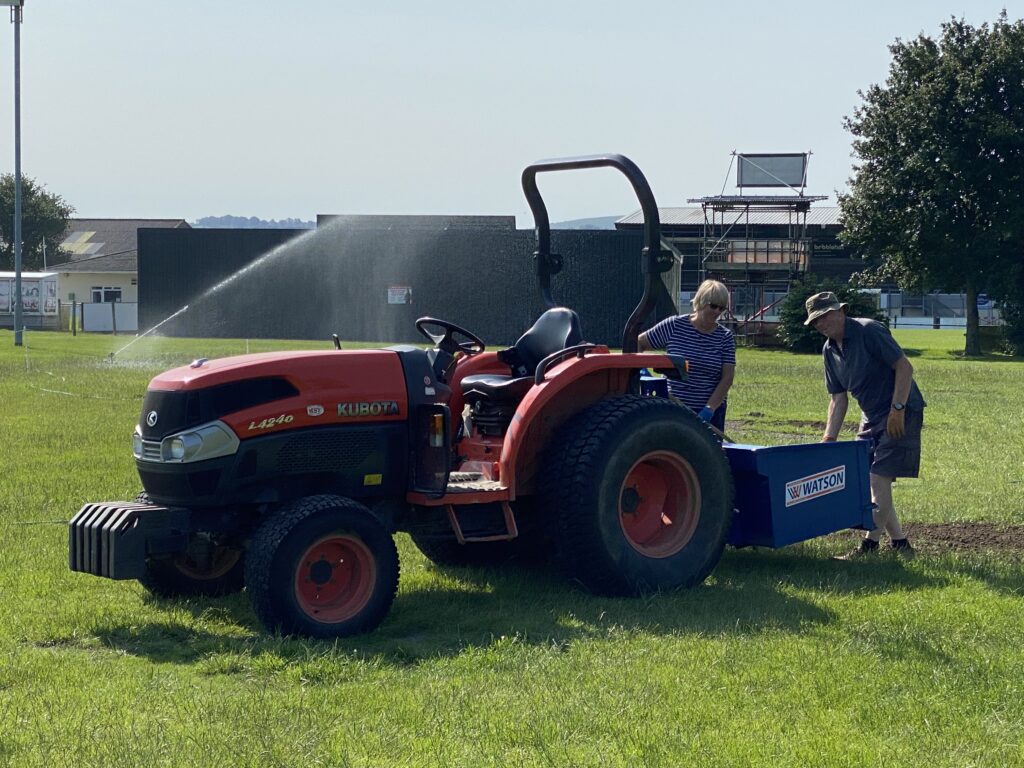 Talking of volunteers it now gives me great pleasure to introduce you to our new Head Groundsman Trevor Wayborn, who was accepted to the position by the Committee on Monday night. He will have his hands full but the task has been made a little less difficult by the hard work put in by our volunteers over the past three months. We look forward to welcoming Trevor to the fold pretty soon. For those of you who might not know Trevor he played for the 2nds and thirds up until about 6 or so years ago and coached a bit as well and from what I gather is as keen as mustard to get the grounds into shape.

Now there is not a lot of team news currently except that the players are training in their pods as per stage B of the RFU’s Return to community rugby roadmap which you can view in full HERE, which in itself is encouraging. One piece of news is the departure of Scott Warren as head coach of Barnstaple Athletic as he has now taken up the coach’s post at South Molton and I’m sure he will be a success there and we here wish him well in his new venture. Scott is also joined by two of the more senior Athletic players while congratulations are in order for Matt Phillips who has landed himself a PE instructors position at Uffculme School and so will be relocating to Tiverton so while it is fantastic news for Matt and we wish all the success he deserves it does leave us with a small hole in the playing squad of Barnstaple Athletic of which I’m sure there are a multitude of some very good senior Colts just ready and eager for some senior rugby.

And it just so happens that we can announce that they will be in very good hands as I introduce Geoff Boxer who joined Barnstaple RFC a year ago, and ahead of the 2020-21 season has taken up the vacant position of 2nd XV Head Coach. Geoff has previously held the position of Director of Rugby at UCSRFC (2005 -2015) based in North London and coached the 1st XV there to three promotions in four years. As an ex-player, London Society (LSRFUR) referee and an RFU Level 3 qualified coach he brings a lot of experience to the Club. He has also held the role of Disciplinary Secretary, and later Chair of the Rugby Development Committee, for Middlesex County RFU (MCRFU) and still remains a Vice-President of that County. This should be an exciting time for Athletic providing they can get some game time later in the season, which is not that certain given the current climate.

Talking of when we might see some rugby at Pottington Road and I expect some of you are hopeful given that the government’s announcement the other day that they hope to have spectator sports back, with luck, from October 1st, which would make our first game October 3rd and that the RFU has announced the dates for games pending the restart time, I very much doubt this will happen because according to the RFU’s Return to community rugby roadmap we would have to be at Stage E by mid-august for that to happen, to start the six week countdown to stage F and given we are only on stage B I can’t see that happening too quickly and certainly not be mid-august, yes I know it’s complicated and I already have a headache but I don’t expect any rugby this side of Christmas, but  could be wrong.

Whilst not knowing when the new season will start, we all know just how important the “Mighty Barum Army” of supporters are and whose continued support is the future of BRFC. and after much discussion on how best to move forward, it has been decided to offer memberships in the normal manner. Over the next few weeks, we will be sending out membership forms for the 20/21 season with the full understanding that we may not be offering any home Rugby games during September and early October 2020 and for new members the membership form will be on the website in due course so please be patient.

With this in mind, we have decided that membership rates will remain the same as last season although single gate entry will now be £10 (RFU advice for Nat 2 League). At the end of the 20/21 season, all members names will be entered into a draw and 3 lucky winners will be given a FREE membership for the 21/22 season.