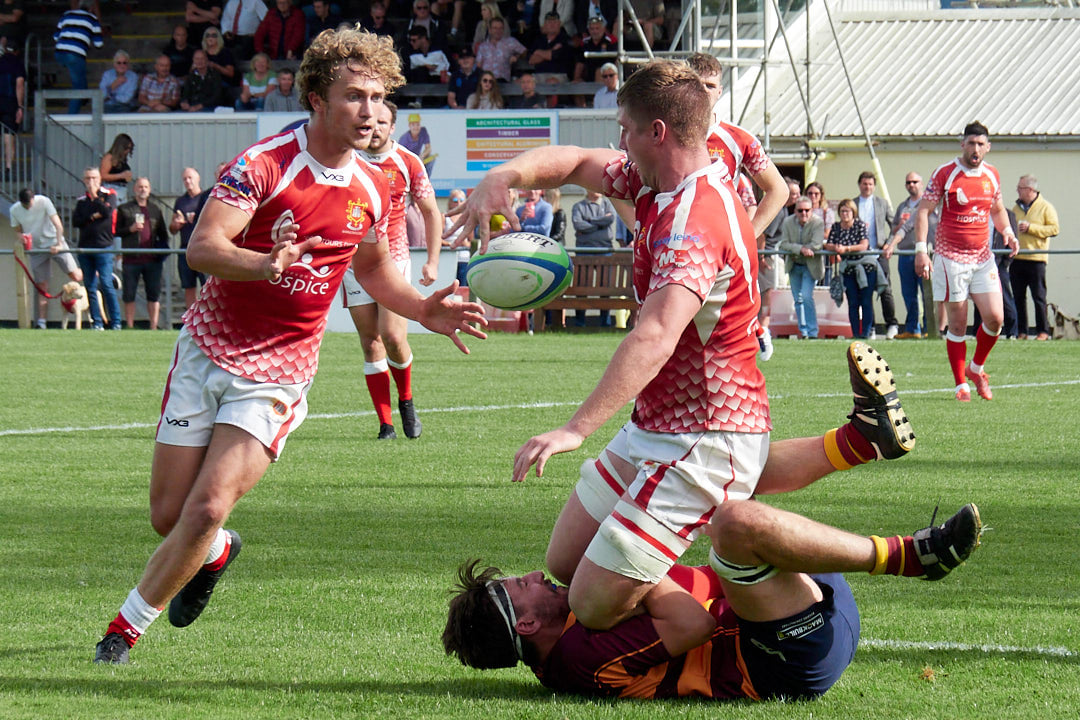 Evening everyone and what a game we have is store tomorrow as the Guernsey Raiders make their first visit to Pottington Road. Don’t forget this one is a 2pm kick off so get up early and make your down to the club for what will be a very entertaining match, even more so as it will be the National League Rugby Review Show’s final featured game of the weekend, so lets make sure we make some serious noise tomorrow. 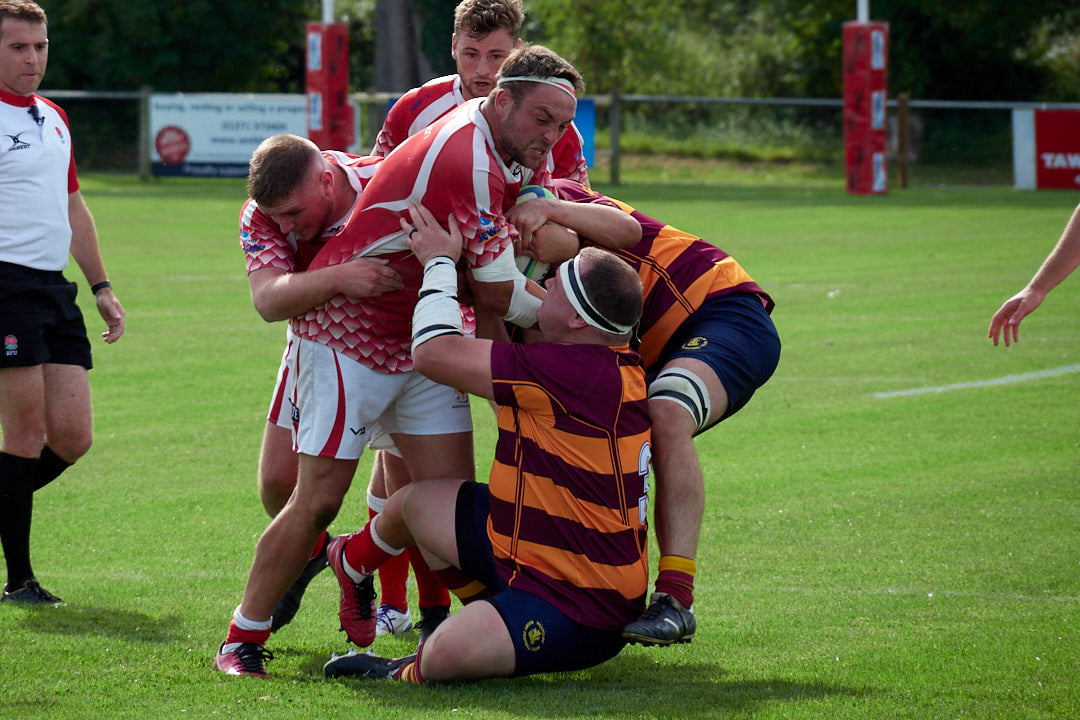 Now the Chiefs had another difficult time on the road much of which was covered in the match report so give that a read if you haven’t done so already, but needless to say these sort of defeats hurt even when you feel you have played well and the Chiefs didn’t play badly it’s just Esher were too strong for them and in the second half chasing the game created a few holes that the home side exploited. The maul worked well though on the few times we were able to use it close range and Esher had no answer to that so we will just have to see how they fare when the visit North Devon and the Pottington faithful I’m sure it will be a different story. Hopefully the Chiefs will come out fighting today and put that one behind them as they did two weeks ago, we will have to wait and see. On interesting fact so far, and yes I know it is only three games, is that all our tries have come in the second half, so if we can get one or two early tries we might just get a chance at that bonus point.

Our opponents today the Guernsey Raiders have had a crazy schedule at the start of the season playing their first four games away from home soil, this match being the fourth, and credit to them they have had a cracking start, setting themselves up nicely for the rest of the season. They have only lost once so far and wins over Rochford Hundred and Ding’s crusaders including scoring 14 unanswered points to win that one 31-34 shows that this team are good and will be difficult opponents indeed and are currently deserving their 5th place in the league.

So the Chiefs will have their work cut out and must continue to keep faith with the type of rugby they are producing because at home very few will live with the Chiefs when they play it quickly and the crowd behind their backs. Today we welcome back Martinas Dromantas from his rest after the HIA at Clifton to the front row, with George Snell back at loose head and Nat Bayet in at hooker it is a good looking front row for this one. Matt Gohl is again on the bench for his first home appearance this season and the same for Robbie Hume. Here then is the team to face Guernsey.

The Chiefs travel to Bury St. Edmunds next weekend and another very difficult game against a team that has so far won both their home games. This Saturday Bury visit Ding’s Crusaders who themselves have struggled to get their season going losing both their home games and looking at possibly losing another against Bury.
Today Henley resume their campaign and have a huge task facing a visiting Clifton high on some big wins. Who will win this emotionally charged game is difficult to guess but I wouldn’t rule out the home side who were one of the fancied teams to challenge for the title. Another one that was fancied for the title Redruth will hope to restart their unbeaten run themselves as they travel to Hinckley who are yet to record their first win.

The big game though must be Old Albanians against Worthing as third and fourth face each other, I expect Worthing’s loss at Canterbury might just galvanise them to face an unbeaten Old Albanian side determined to keep third place. Leicester Lions after their opening day defeat at Redruth are going to need everything including the kitchen sink if they want their third consecutive win as they welcome a rampant Esher who have dominated all their games so far.

Finally Westcliff will be hoping to put the Lions defeat behind them as they visit Barnes, another team licking its wounds following at big defeat with both teams struggling after opening day wins. Rochfor Hundred will be hoping home advantage might give them the edge against Canterbury to record their first win of the season.

Well that’s it for National 2 South

Yes you read that right the Bucc’s are back and played their first game of the season at Pottington Road against Chard last Saturday. It was an entertaining game watched by 100+ crowd enjoying the sunshine, I have no idea what the score was but I do know they were leading comfortably at half time, you can make your own minds up what happened next.

Athletic were unfortunately let down by Brixham Crusaders who cancelled, not sure why, but the Tic’s have played already this season with a 0-31 win at Crediton and today will be making their way to Ivybridge to face the Vandals, but are back on home soil next weekend where they face Devonport Services kick off is 2.30pm.

As for the Colts it was their first disappointment of the season losing at Kingsbridge 33-0 following their earlier successes in previous weeks, but Kingsbridge is always a tough team to face on their soil and I’m sure the Colts will bounce back from this one and have learnt a lot which I’m sure they will take with them to Newton Abbot for today’s game.

Yes the Juniors season has started and just for you here are a couple of match reports taken from the Barnstaple rugby facebook page yep I never get told anything nowadays but needless to say it’s is great to hear from the younger teams.

The Barnstaple RFC under 11s and under 12s were in action over the weekend at the Landrover Cup! Awesome to see some of our amazing junior section back playing! Below are the match reports from each team!
U12s – “After what has been an absolute age due to waterlogged pitches and then COVID, the U12s returned to playing today and went straight into the Land Rover Cup. 16 teams from across Devon and Cornwall from Crewkerne in East Devon to Redruth came to compete. The standard was high and the boys were excited to play. The boys came second in their group only losing to a strong and well drilled Exeter Athletic. They then went through to play the other second placed teams and they topped this group to finish 5th overall. They worked hard, supported each other and look good for the season.” – Strong showing from our under 12s! Can’t wait to see them build on that throughout this coming season!
U11s – “Great teamwork by the U11’s winning 6 out of 6 matches. Fantastic principles of rugby displayed with great 2nd and 3rd phase play gaining tries. Strong performances from all 15 players with a 95% team changeover at half time not affecting their skills and determination.
Comments from other clubs coaches saying that BRFC U11’s displayed the best rugby all day. Massive credit to the club and themselves and to topmost all they were picked out as the team to go to the Premiership Final.” – Fantastic result from our under 11s! A team to watch for the future!

Good luck to everyone today