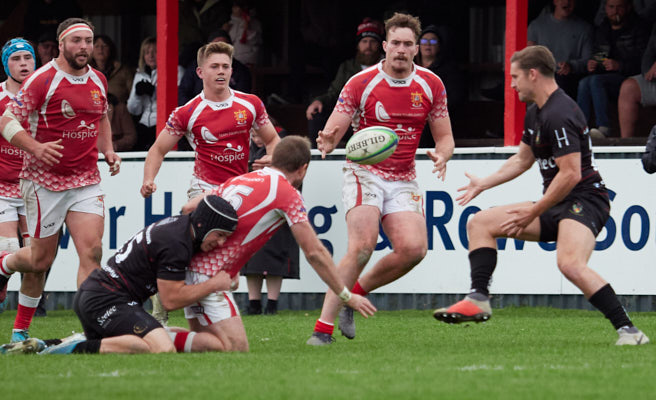 Good evening everyone and yes the Chiefs are back at home this Saturday for what should be a thrilling encounter with a very good and experienced Leicester Lions team as they make their way down the M5 to visit us at Pottington Road for the first time. Thank you to Town & Country and Anderson &Evans Ltd for sponsoring Saturdays game.

Now before we get to the two teams we just want to draw your attention to our latest purchase thanks to the graft of Treasurer Benn Coley who has purchased the Amazon package so we can watch all the internationals that are being shown on Saturday so prepare yourselves for a festival of rugby that will last late into the night at Barnstaple Rugby Club. Below is the kick off times of all the Autumn Internationals this Saturday with the England, Wales and France games all to follow the Chiefs. 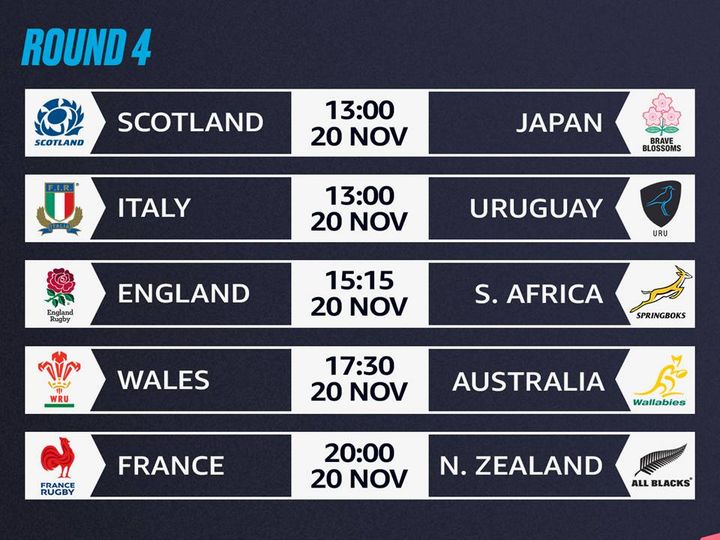 Also don’t forget it is only two weeks to the Barum Christmas Dinner which is on December 4th followed by Barnstaple Chiefs v Henley. Prepare yourself for a festive three course meal which including entry is just £35pp, but hurry as there will be huge demand, bookings can be made by contacting Jacqui Edwards at bookings@barnstaplerugby.com. 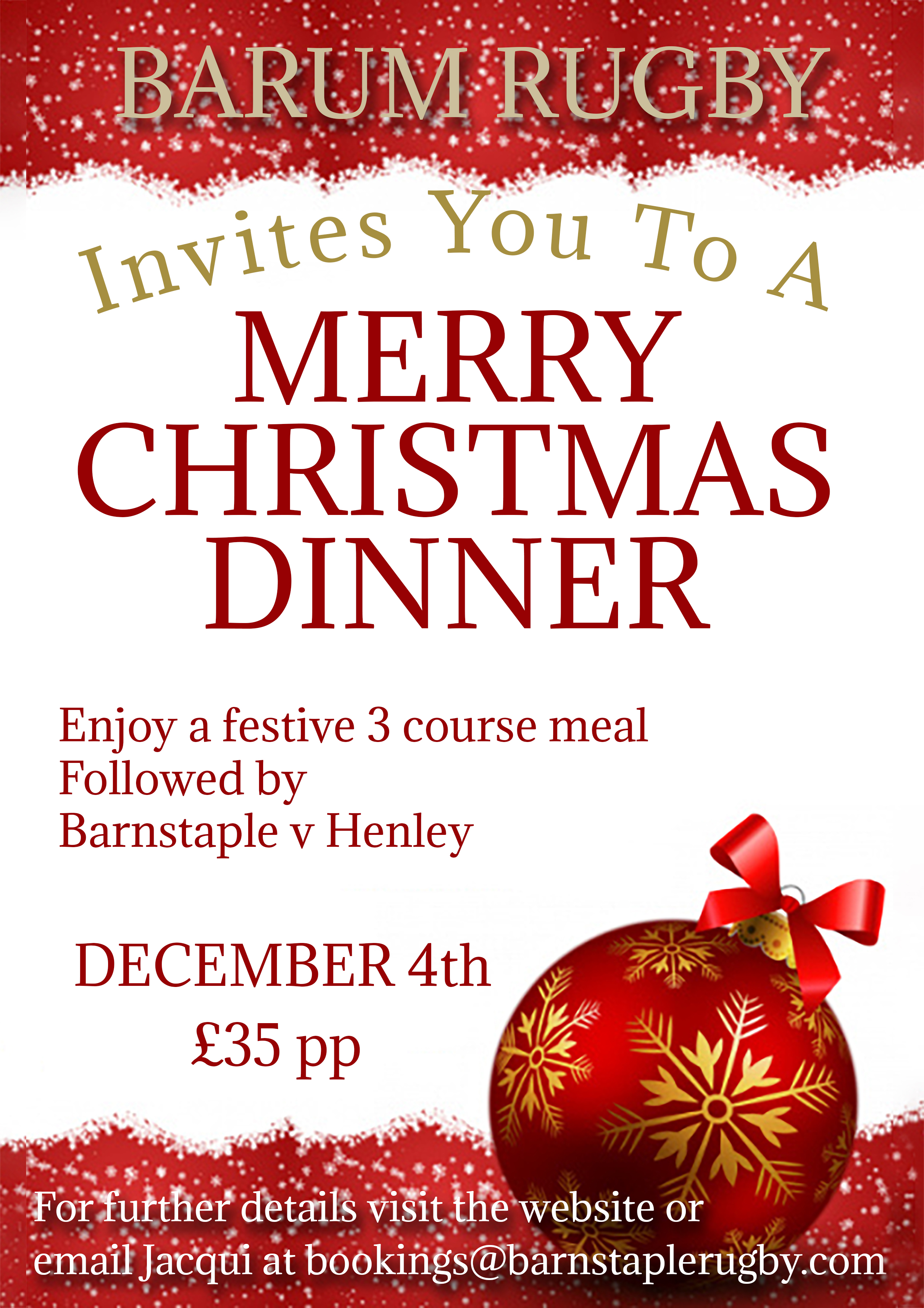 Now before we get to the game I just want to give the juniors a big shout out following their Remembrance Day display last Sunday below. 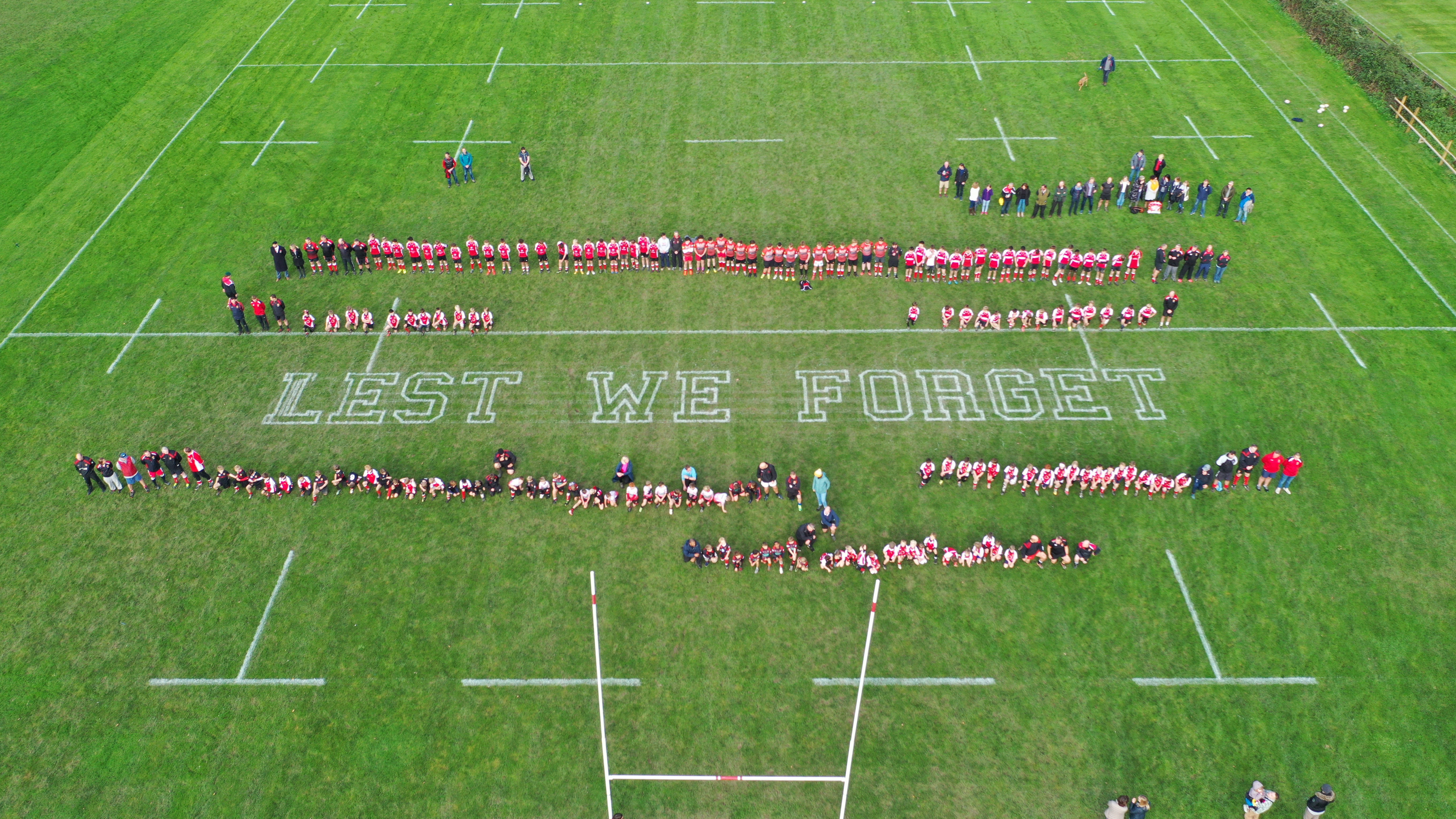 So who are Leicester Lions you may ask and you would be right in asking as they are a relatively new club and one we have not faced before, Now before I waffle on you will see all this in the program but it saves me typing all night to just cut and paste what is in the match day programme, also the facts I have are direct from Wikipedia so don’t shoot the messenger if anything is incorrect. As I was saying Leicester Lions is a relatively new club which was established in 1998 however their roots go back much further as the Lions were formed from an amalgamation of two older clubs Westleigh RFC (est 1904) and Wigston RFC (est 1946) and those two clubs have had the likes of Martin Johnson, Louis Decon and Billy Twelvetrees play for them. As you can see despite how young the Lions are there is a rich history to this team. The Lions quickly proceeded to make their mark as they aimed for National level rugby and cement themselves alongside Loughborough University and Hinckley as the senior clubs in Leicestershire after Premiership Rugby side Leicester Tigers.  Leicester Lions are currently coached by former captain and England Counties outside back Gareth Collins (great surname) and play their rugby at Westleigh Park in the Midlands a mere 218 miles away.

Although new to Barnstaple, Leicester Lions are not new to National two rugby with a fairly successful number of consecutive seasons behinds them since being promoted to National 2 North in 2008/09 season, where they remained until a sideways move to National 2 South at the end of the 2018/19 season and last season despite its cancellation finished just outside the top 6 in 7th place. This is an experienced National 2 team that the Chiefs are meeting today and currently sit in 7th place with six wins to their name so far this season following their 32-15 home win over Ding’s Crusaders, with two of those wins on the road.

As for the Chiefs it was another loss on the road last weekend but a very crazy end to the game. As they approached the 70 minute mark a Luke Berry try converted by Jake Murphy pulled the Chiefs back to a 12 point deficit and another converted try would have gone a long way to securing a losing bonus point but three tries by Old Albanians in as many minutes stopped any chance of that despite Martinas scoring another for the Chiefs, yes that’s right four tries in as many minutes at the end of a gruelling 80 minute match, where did both teams find the energy, I honestly don’t know but that energy will be much needed today when the Chiefs face Leicester Lions. The first thing the Chiefs need to do is make Leicester Lions work very hard for every inch of turf they try to make and so far the chiefs have been relatively successful at that on home soil, according to the stats on England rugby the Chiefs have only concede 79 points at home which is only bettered by Guernsey who have only conceded just 49 points, making Pottington Road one of the toughest venues for visiting teams to score at. Then it’s just a case of making our pressure count and taking those chances as and when they present themselves.

Unfortunately the Chiefs will be missing a stalwart over the last five years as Will Topps will be unavailable for this one and it will be the first game he has missed since September 2016 when he started a run of 121 consecutive games played for the Chiefs. Now that must be some sort of record to only have missed one game in 122 especially when you consider that includes two and half seasons at National 2 level rugby. Thankfully it is not an injury and he can try and break his own record with another five years of continuous rugby for the Chiefs next weekend. Other changes to the team from last weekend sees Jake Childs come in for matt Gohl and Dan Lee returns to the no.8 position..

So what about the rest of the league well another loss for Worthing away to Henley has cost them dear at the top of the table and they will be looking to reassert their authority against Hinckley at home but if there is a dent to their confidence then Hinckley might just be the last team they need to face as the visitors are probably well rested last weekend following their impressive win the week before which was also at Henley beating them 21-38 and today might just see them claim another scalp on the road. Guernsey also lost this time at Clifton 40-17 making it two loses from two and they will certainly want to stem that leak as they welcome Westcliff to the island who suffered another heavy defeat at home against Esher.

Elsewhere at the top Clifton have a difficult trip to Bury St. Edmunds and this will be tough for them as so far this season Clifton have only won one game on the road while Bury’s home record is very impressive although this will be the first top six team they have faced at home. New league leaders Redruth still with a game in hand over everyone else after beating Bury St. Edmunds at home last week visit Canterbury looking to extend that lead and must rate their chances as Canterbury have faltered at home on a couple of occasions, mind you they have had a fortnight’s rest having not played last weekend and might just prove a bit too energetic for the Cornishmen. As for Esher they are certainly on a hot run having won their last four games which included wins against Clifton and Redruth and given that there is just two points that separate the top four teams they will certainly want to secure the win against 4th placed Old Albanians who themselves have an impressive record on the road having won four matches as the visitors including beating Clifton in Bristol, in fact the only away fixture they lost was by a single point at Redruth 22-21 and will prove to be a tough challenge for the home side.

Barnstaple are on their travels again next weekend as they venture to South West London and a day by the Thames to face an inconsistent Barnes team whose home win last week against Rochford might just be the springboard they need heading into this week’s game as they themselves travel to the west country to take on Dings Crusaders who lost at Leicester Lions last Saturday making it four loses from their last five games. Finally Rochford will be looking to get back into the groove following three consecutive losses and will be thankful of a home fixture unfortunately it will be against a Henley side still buoyant following a very impressive home win over Worthing 43-26 and if they produce that sort of form today it will be tough for the home side.

That just about wraps it up for the National two south, make sure you’re at the ground early as it is a 2pm kick off and don’t forget that we will be showing the autumn internationals. See you there. 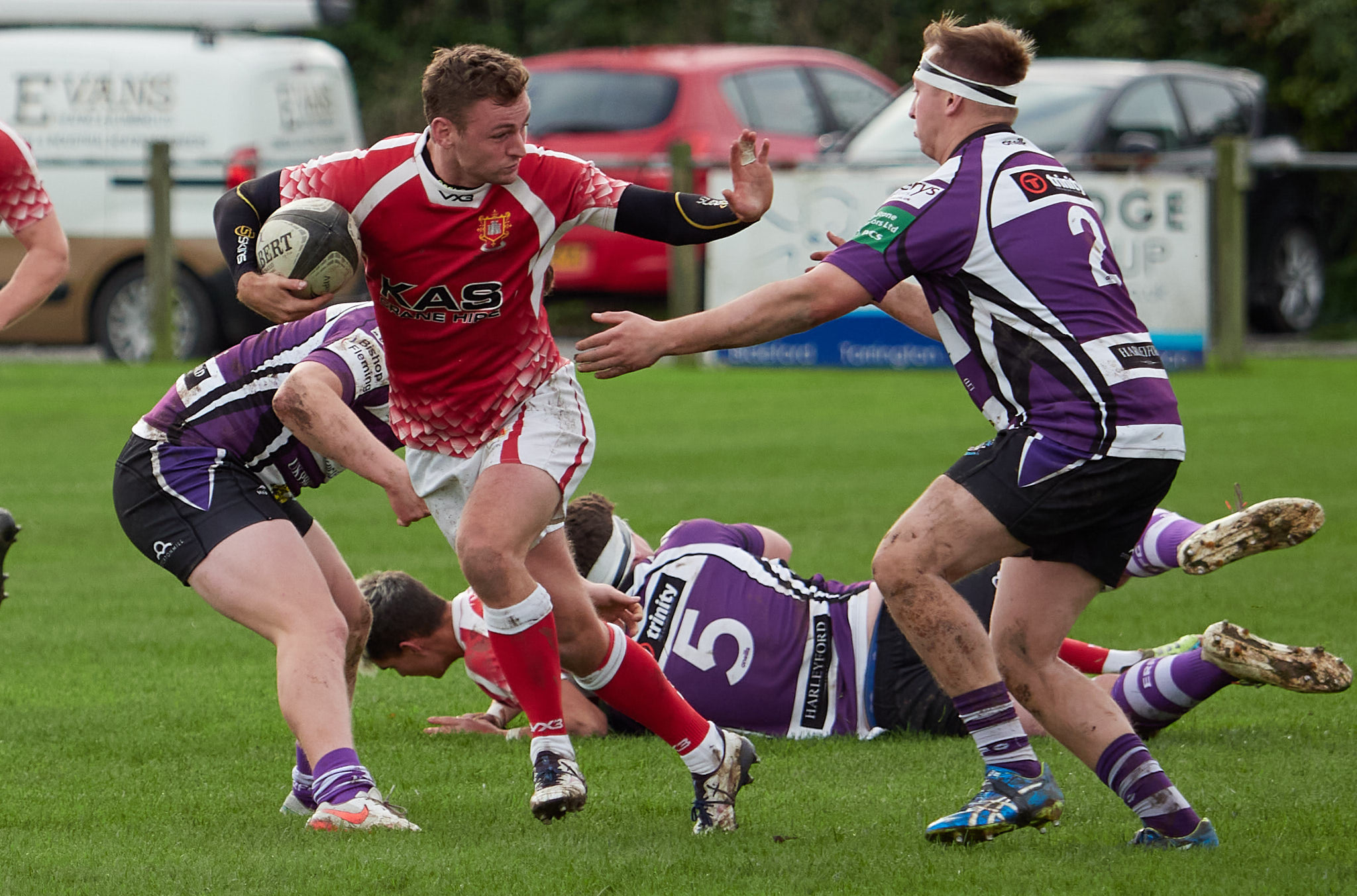 Now we have had some really exciting rugby played over the last three weekends with Athletic starting it off with a thumping 67-0 win over Exmouth 2nds to put them just five points behind leaders Ivybridge with a game in hand. Then it was the turn of the Colts with a very good 22-14 win over Exeter Saracens in which they dominated the second half to secure that victory.

Well last weekend it was the Bucc’s turn to take to the field in front of nearly 200 supporters with an impressive 20-5 win over Ilfracombe 1st XV.

Today Athletic head off to Teignmouth, the Colts are away to Okehampton while the Bucc’s have a deserved weekend on the beer before they take on Tiverton here at Pottington Road next Saturday as are Athletic kick off for those games 2pm. Trust me they have been great to watch and there is a sizeable crowd for these games so chance to catch up with friends and share a beer or two as entry is free.