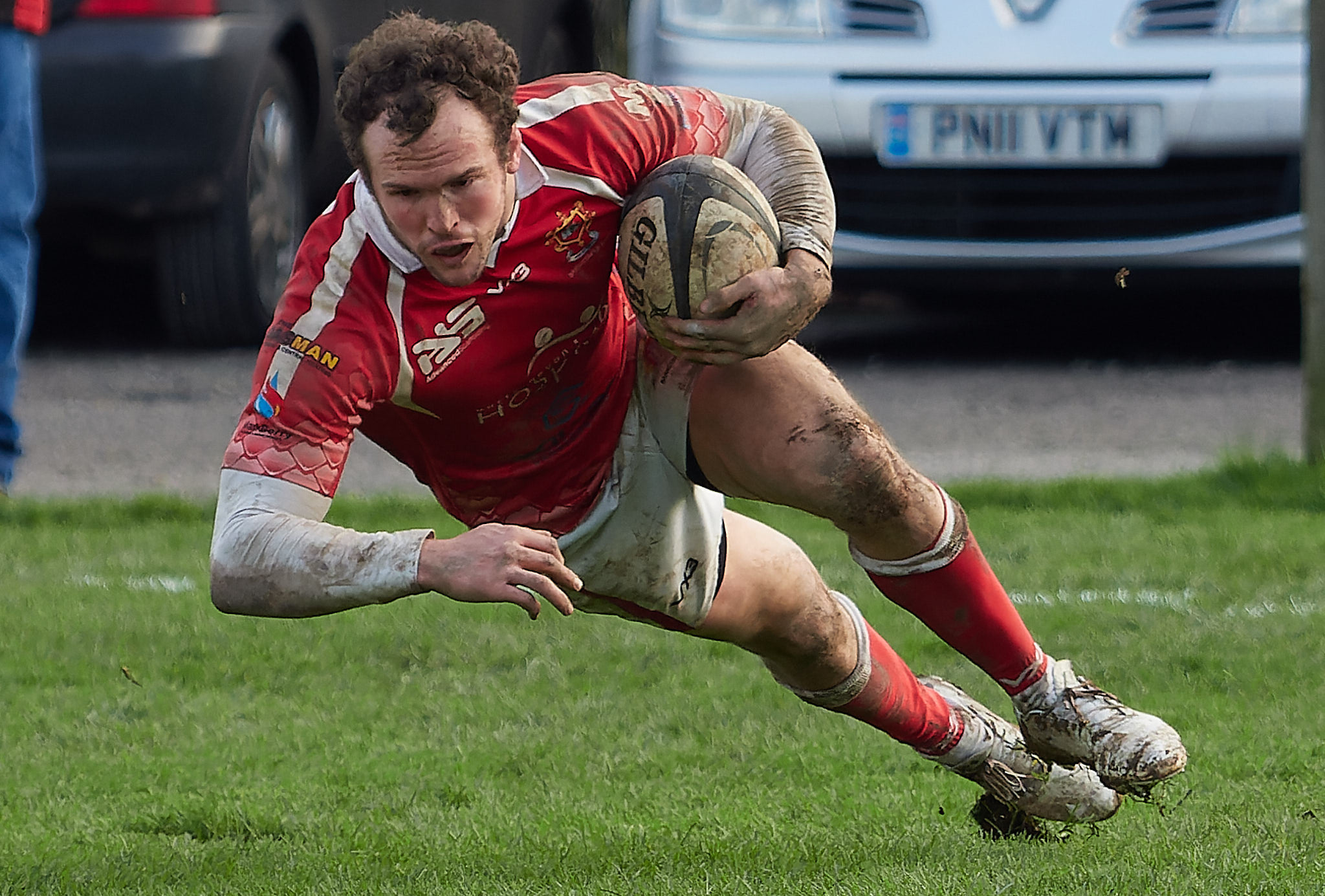 Evening everyone and today we are just going to summarise the events of the weekend rather than give you a blow by blow account. Almost is the word for the Chiefs this weekend. A point and a try short of bonus points losing to Westcliff 28-20 to give the home side their first win of the season. By all accounts the Chiefs played well but just couldn’t grab their first win on the road which is a shame, nevertheless it is all valuable experience at National level for this young squad and next time they might snatch it.

It was a lousy first 20 minutes and the Chiefs were on the back foot right from the first minute as Westcliff scored straight from the kick off, only to double their tally to 14-0 fifteen minutes later. Tries by Dan Lee and Johny Carter either side of half time with Tyler Gordon-Oke converting one of them put the Chiefs within a hairs breath of Westcliff, but the Home side were able to score another brace in five minutes not long after to ensure the bonus point. The Chiefs did rally with a penalty from Tyler and another try by Johny Carter but with just a minute or so to go they ran out of time. It also looks like there were three injury replacements as Sam Roberts, Nat Bayet and Martinas were all replaced as a result of injury hopefully they’re not serious, we will have to wait and see. Up next is another massive trip as the Chiefs travel into the heart of Kent to face Canterbury, watch this blog for the latest team news and info regarding that game.

On a happier note the Colts continue their 100% record this time winning at Pottington road against Tavistock Colts. They sprinted out of the blocks to score four unanswered tries in the first half and completed the job at full time 39-5. There was one point when after just 10 minutes or so with everyone watching the game a short whistle brought everyone’s attention back to the ref who was laying almost motionless on his back. Fortunately it was a hamstring or some such injury which caused him to drop to the floor and not something more serious as the 150+ spectators held their breath expecting the worst. Fair play to the Ref though, who was in obvious agony as he hobbled around the field continuing to referee most of the game not wanting to let the youngsters down, but eventually gave way to one of the Colts coaches for the last 10-15 minutes of the game. So another excellent win and on course to win the table as they face South Molton at Pottington Road next weekend.

Finally it was also good news for Athletic as they travelled to Newton Abbot with a bare bones squad. Yet this didn’t stop their scoring fest as they rattled in another half century beating the home side 53-33. With lots of attacking rugby on show, scoring eight tries and lots of character from a very young squad, they really are enjoying their season so far. Tries from Harvey Rostock (2), Brandon Moore, Waqa, Garreth Turner, Callum Ford, Luke Knight, Tom Turner with 5 conversions and 1 penalty from Ed Day secured a bonus point win to put the Tic’s within just 1 point of Ivybridge whose game was postponed and with 1 game in hand.

That’s it for the rugby don’t forget at Pottington Road next Saturday both Athletic and Colts are playing. The Colts take on South Molton Colts while Athletic face Cullompton for their first home game of 2022. 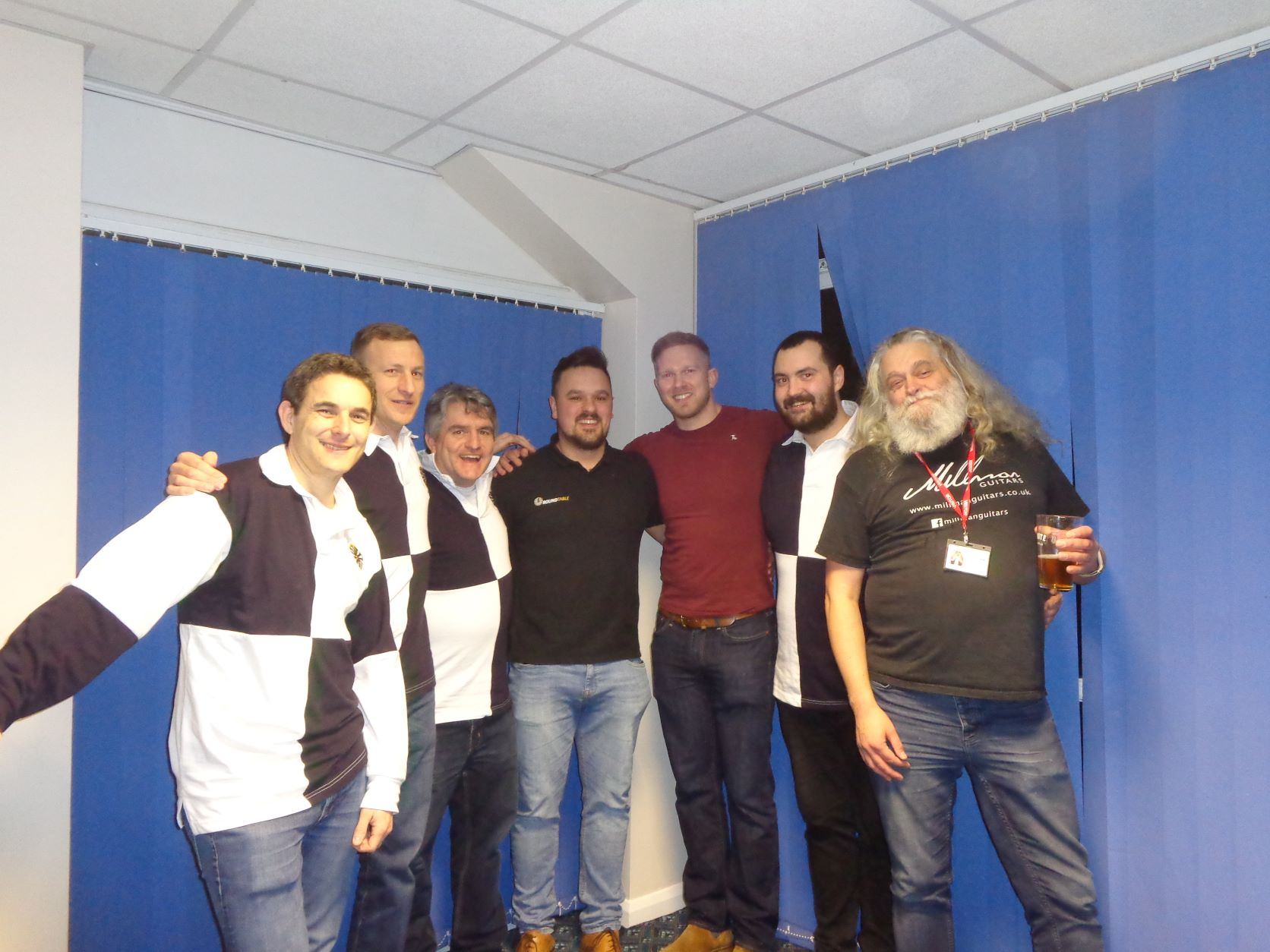 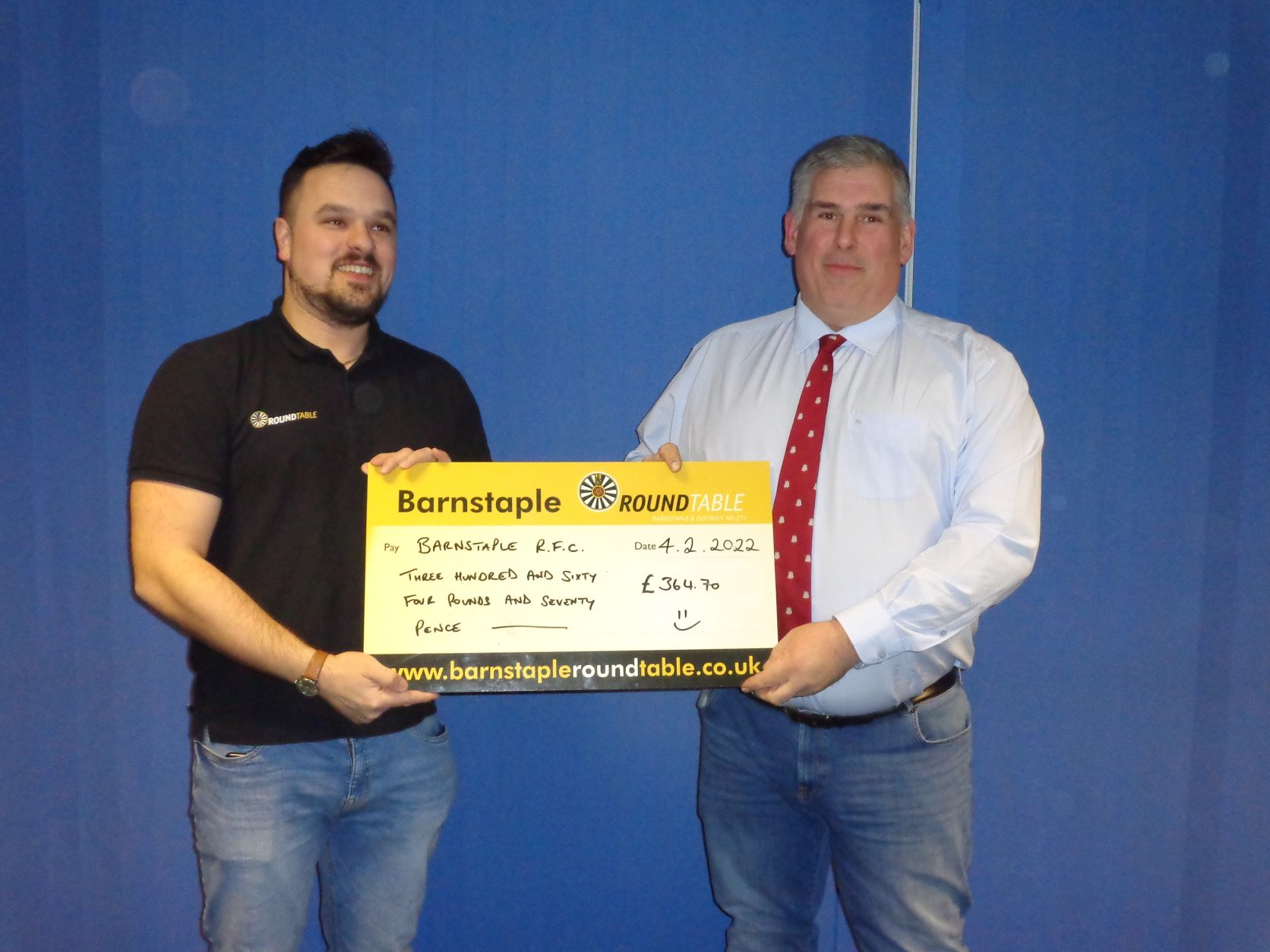 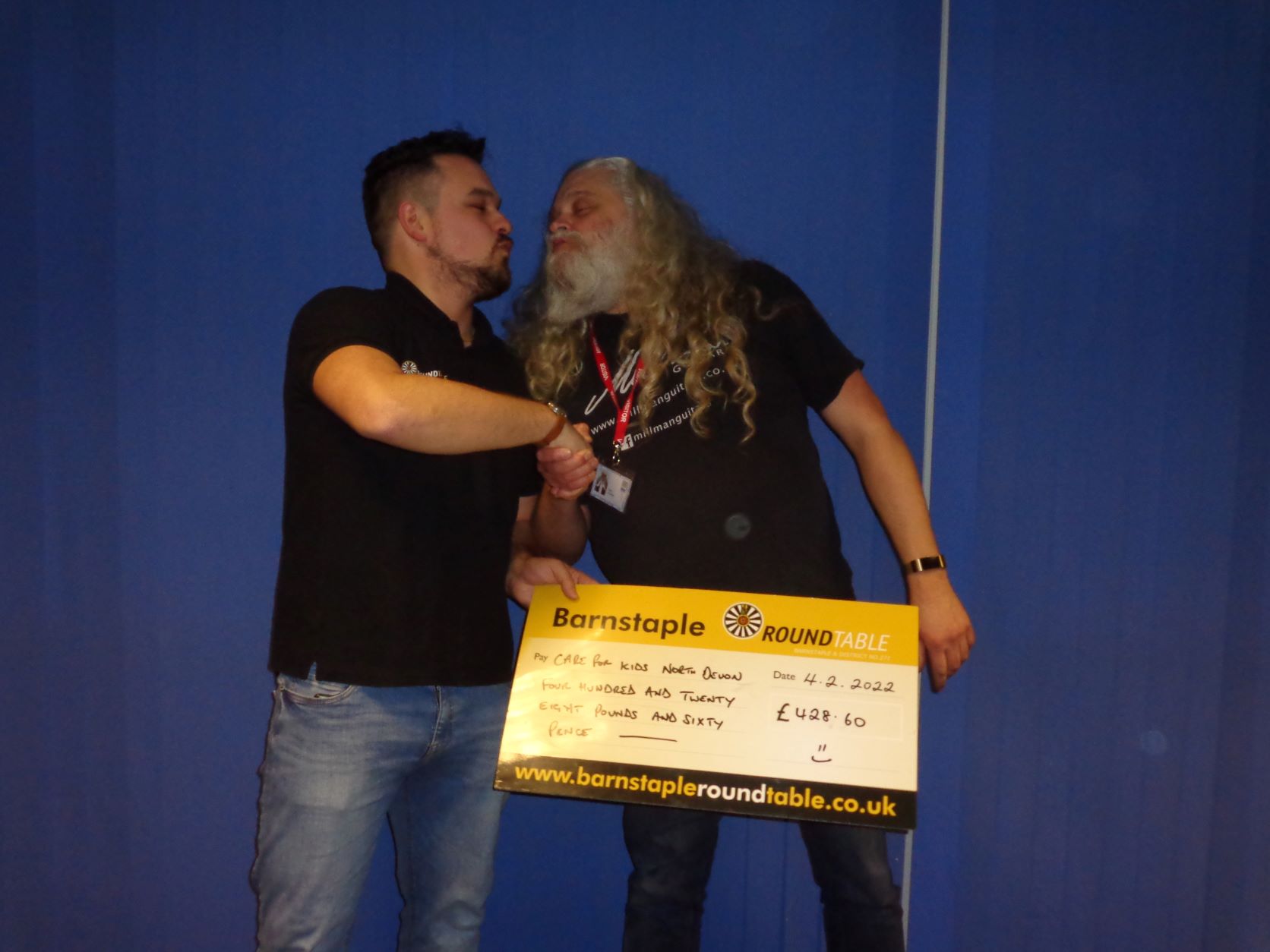 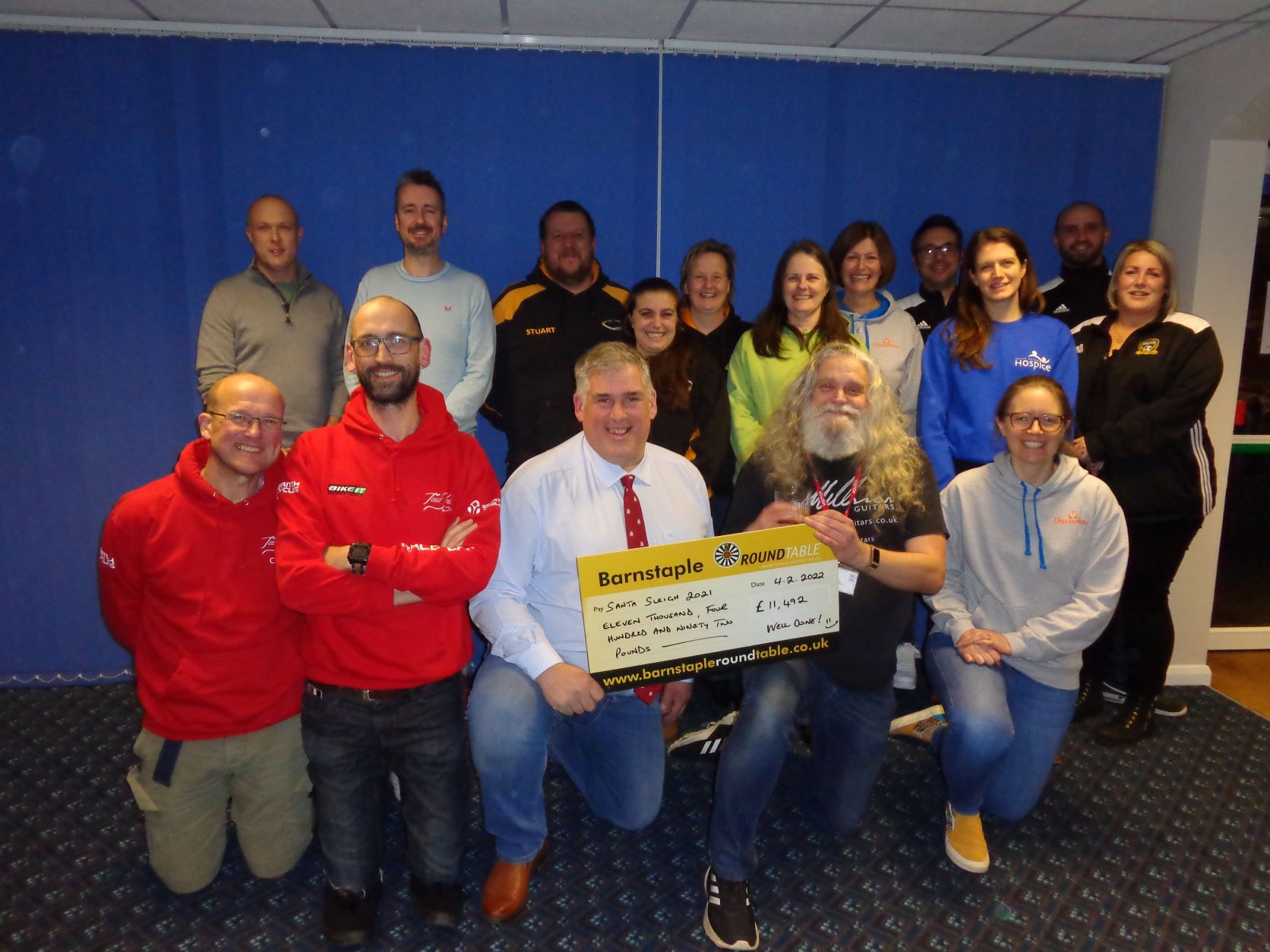 The annual cheque presentation evening for the Barnstaple and District Roundtable Santa Sleigh took place on Friday 4th February at Barnstaple Rugby Club where ten charities and organisations were presented with their cheques from Mr Andrew Ridley, Vice Chairman of Barnstaple Roundtable Club.

Each year throughout December the members of the club with the support of collectors from worthy charities and good causes help to collect money covering every district of the Barnstaple area. This year the club raised over £11,492 which is up from the previous year.

Andrew Ridley highlighted, “I’m immensely proud of what we have achieved and would like to thank everyone who has taken part in the Santa Sleigh and a special thanks goes to our sponsors, Richard Brend, John Howard and his team at Taw Ford for loaning the 4×4, Blue Orange Signs at South Molton, and The Voice who helped to promote the Santa routes across Barnstaple and the surrounding areas.

Andrew goes onto say, “My biggest thanks go to the residents and people of Barnstaple and the surrounding area in helping to make this possible through their generosity and support and we have already started planning for this Christmas in making the sleigh even better for the people of Barnstaple.”

Roundtable has been going for nearly sixty years in Barnstaple area and it is targeted for young men between the ages of 18 to 45  who might be involved professional services or trades and want to give something back to their local community, currently the club is looking to recruit new members and if you are interested please contact Barnstaple Roundtable on the following e-mail address barnstapleroundtable271@gmail.com