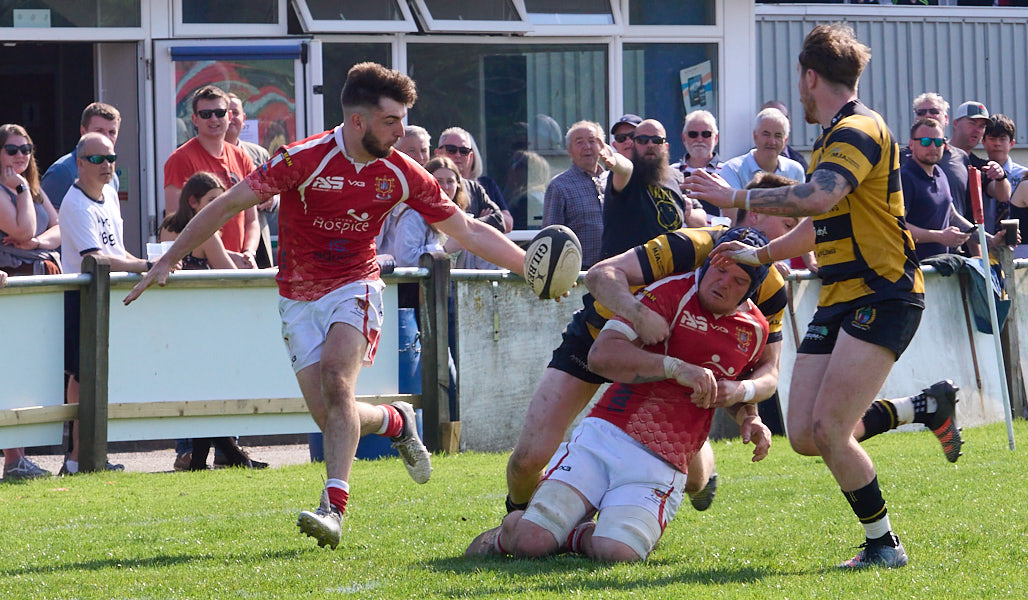 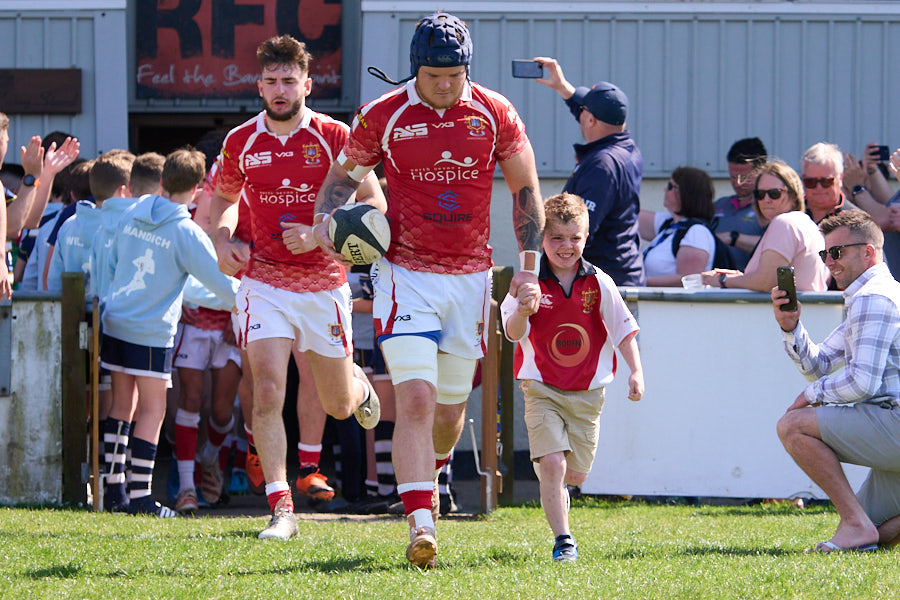 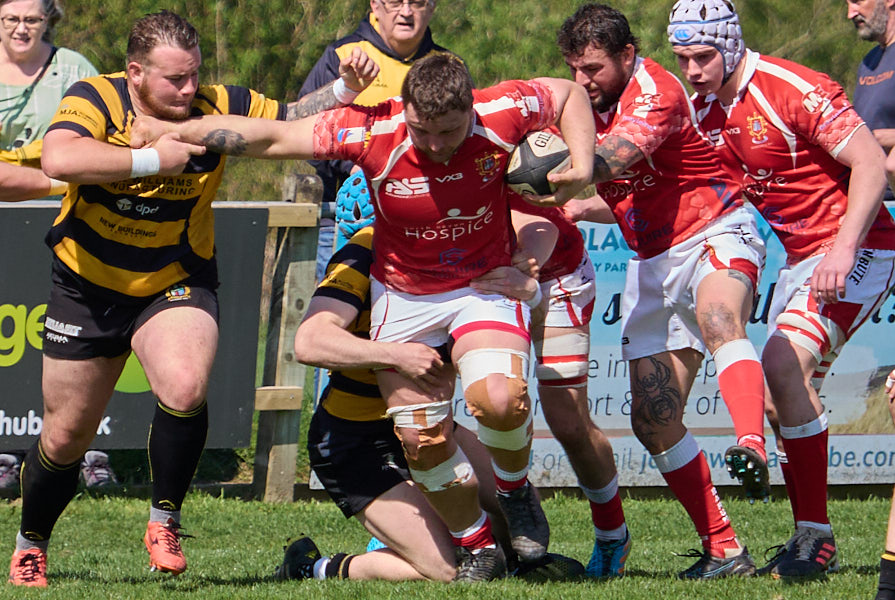 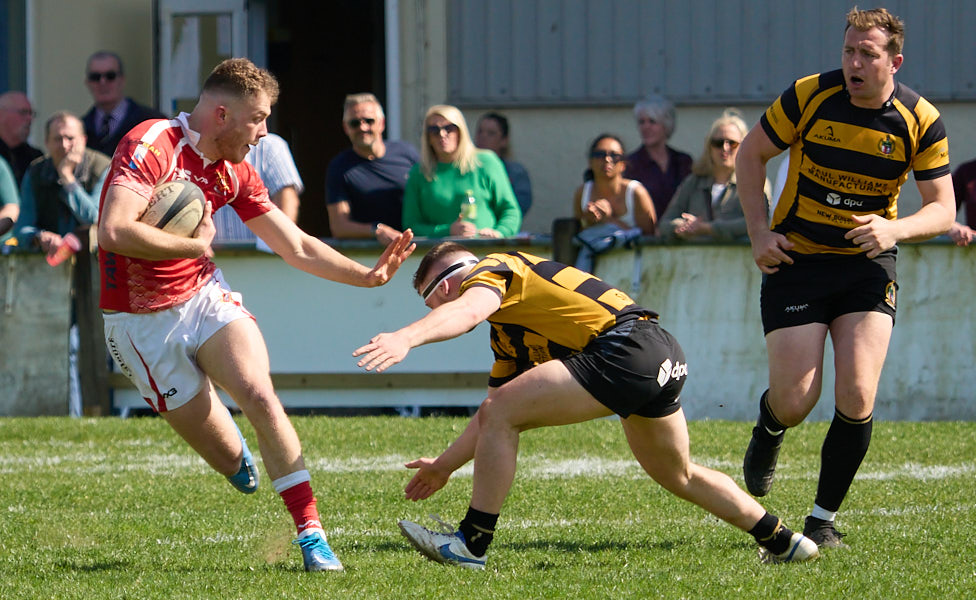 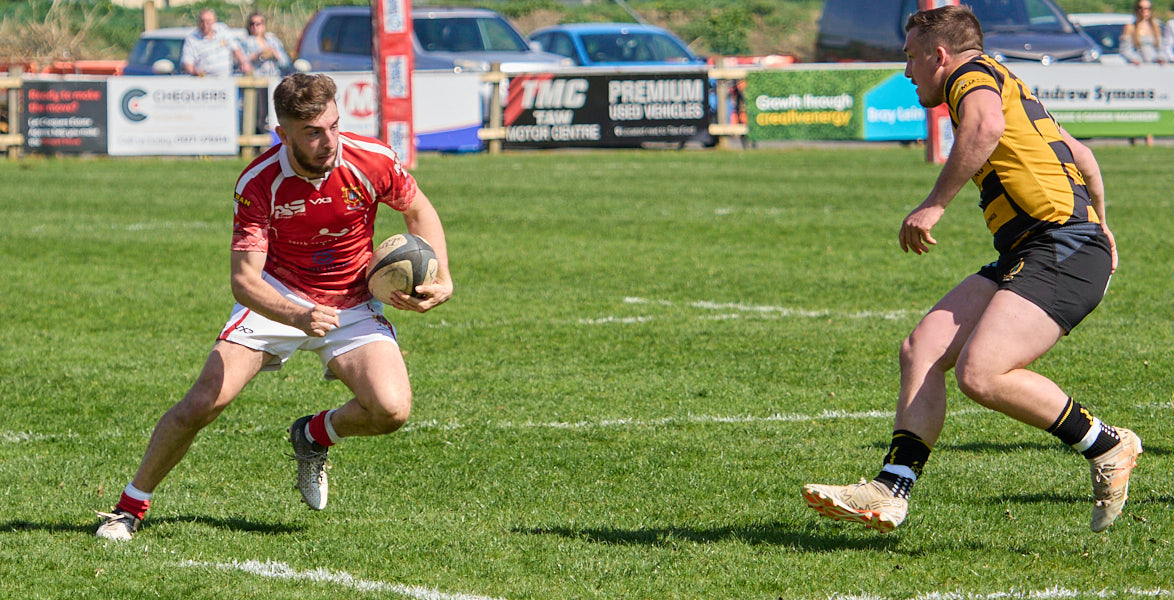 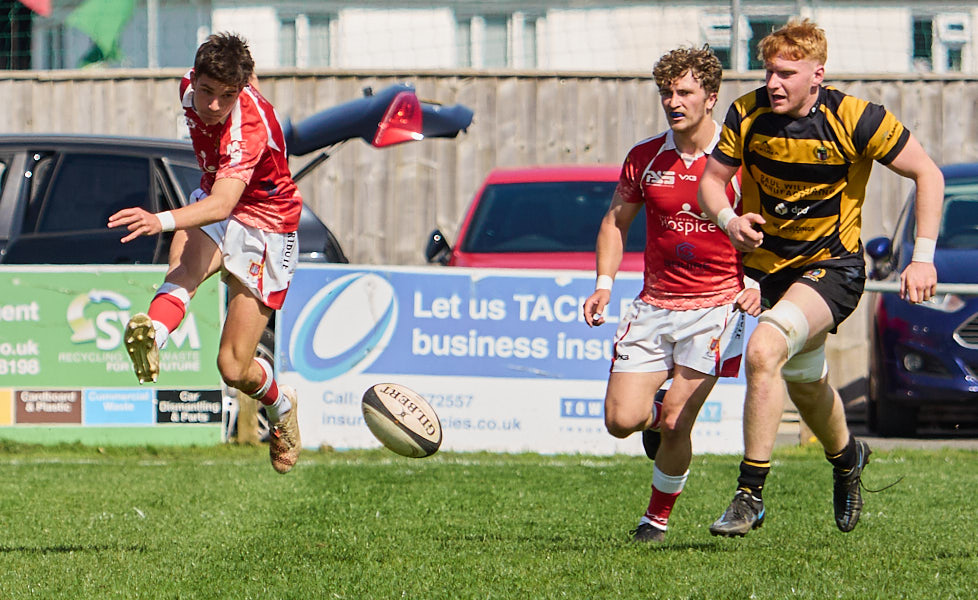 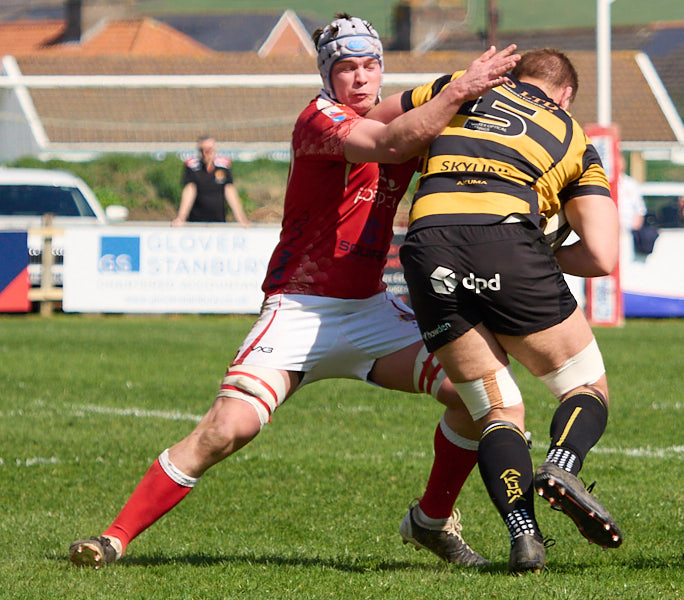 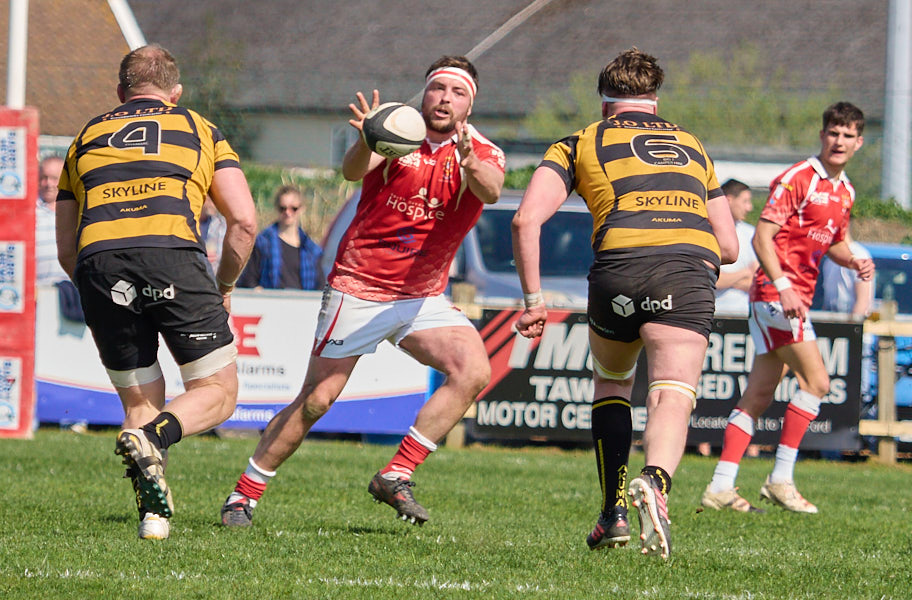 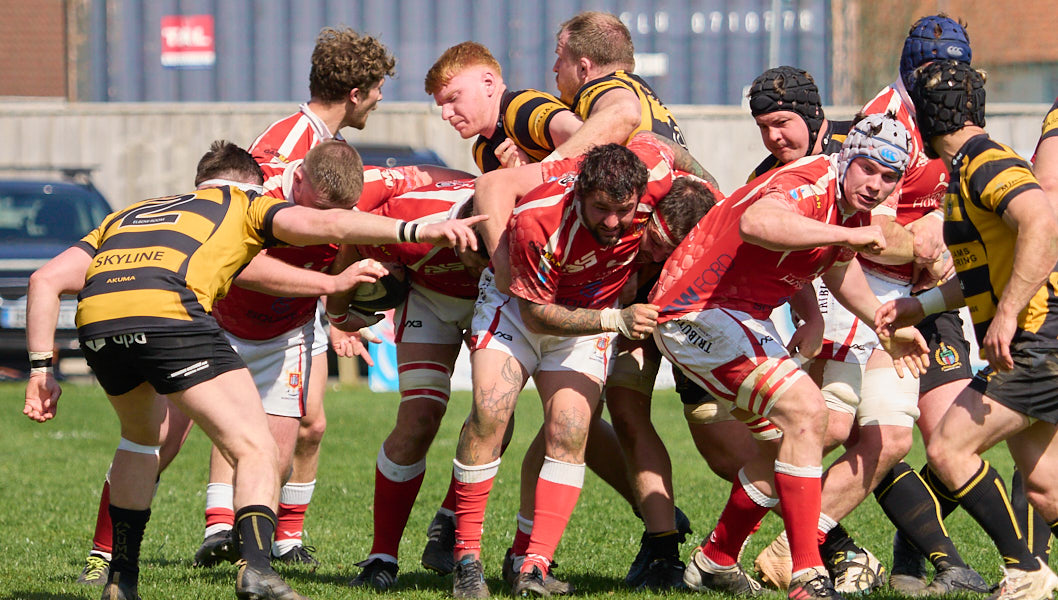 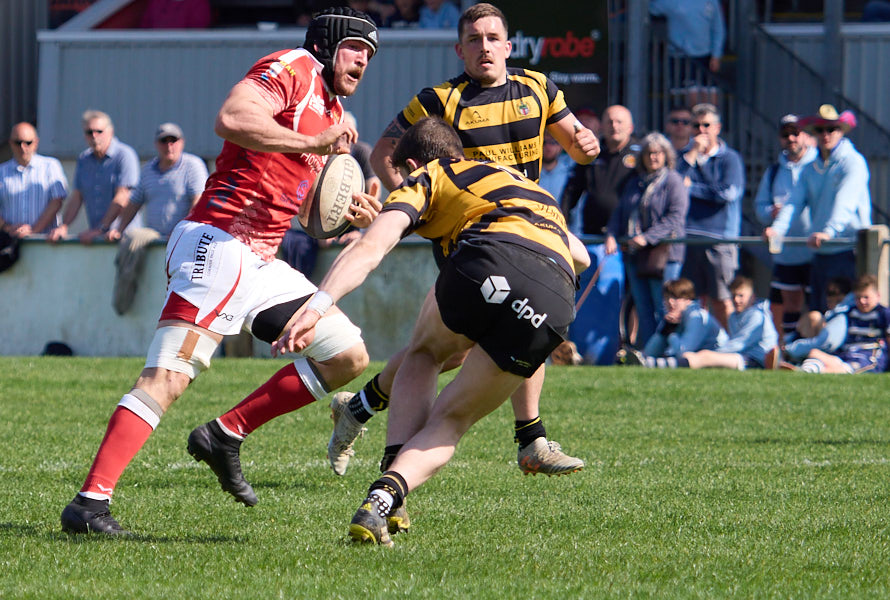 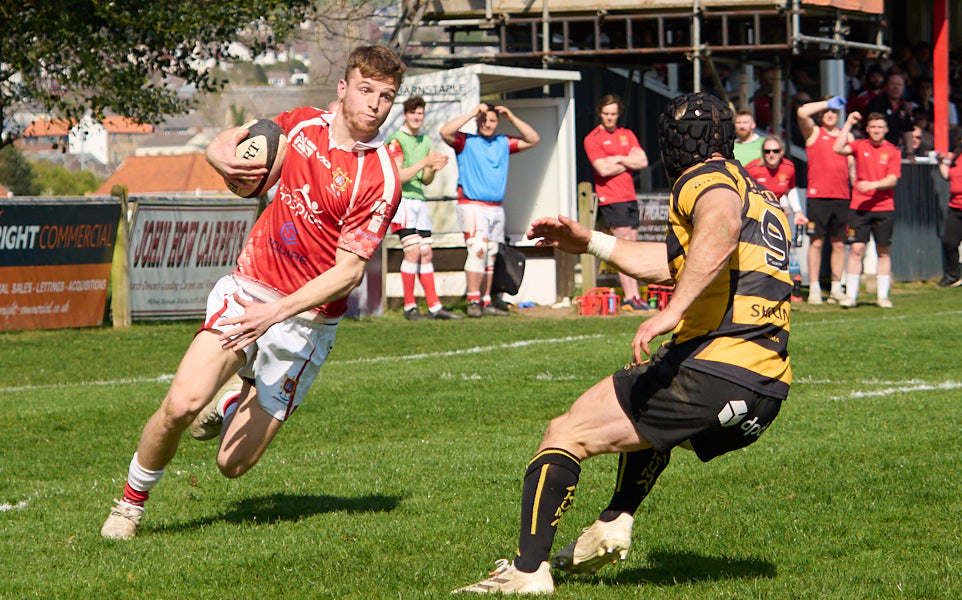 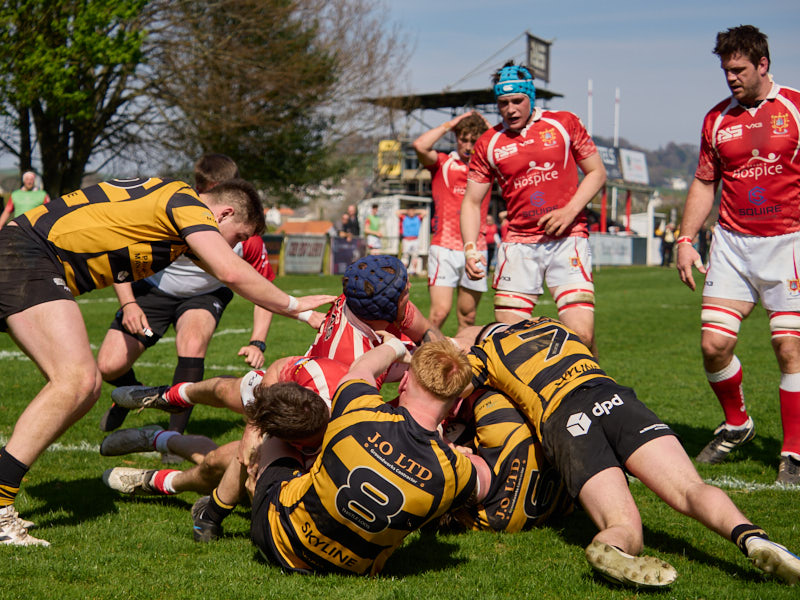 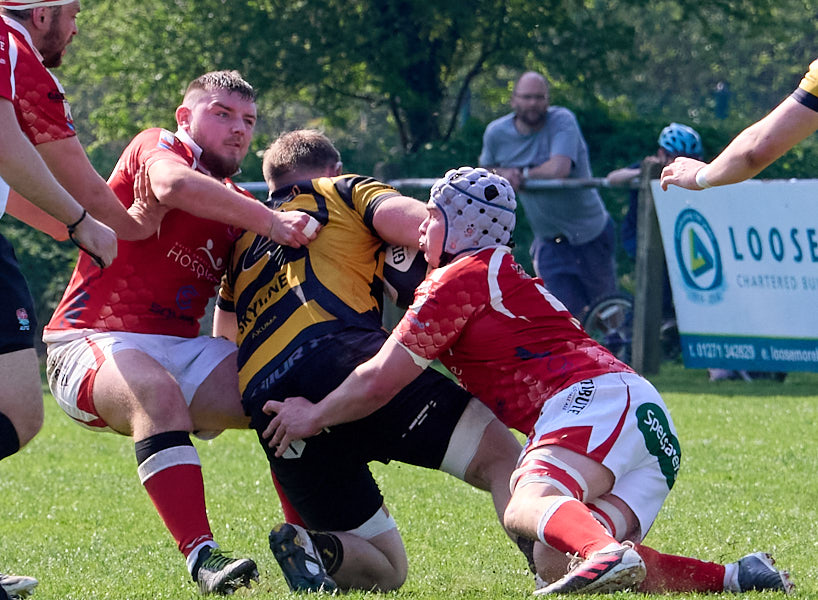 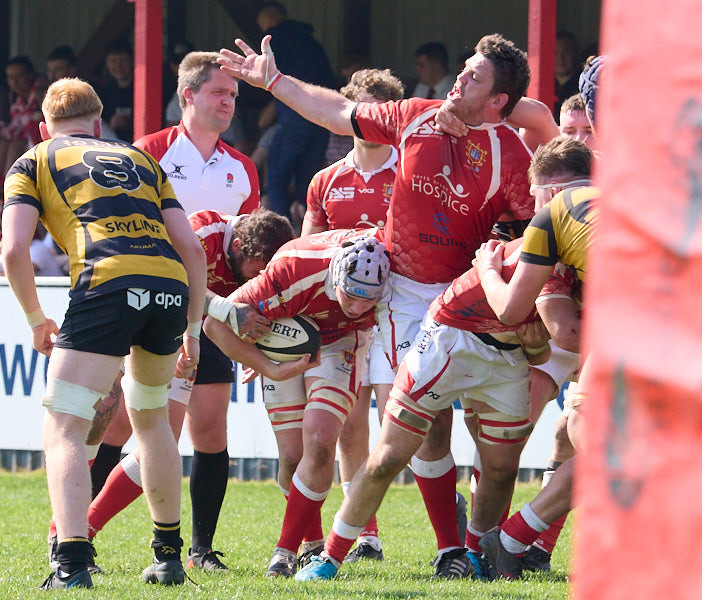 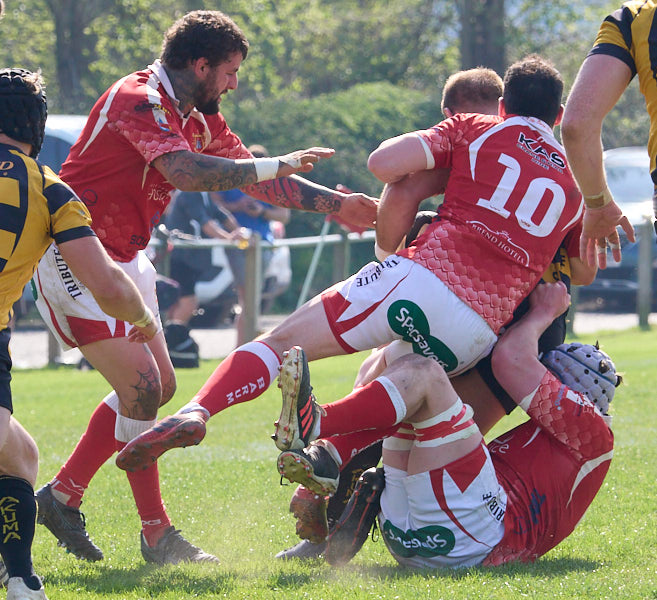 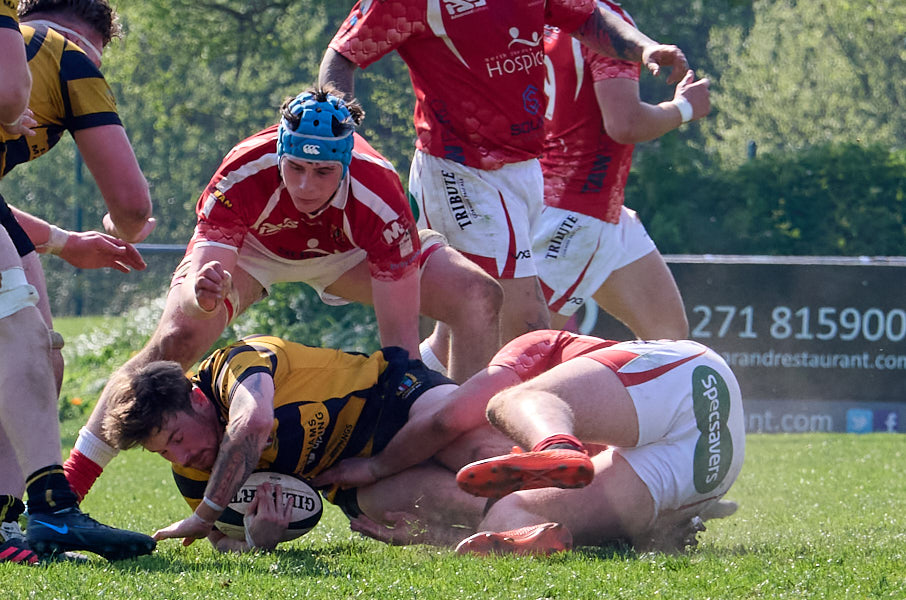 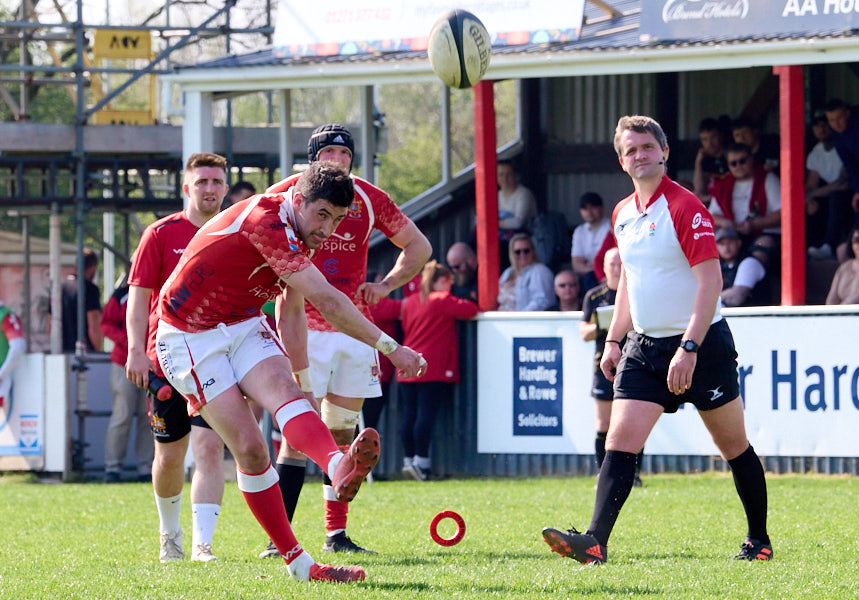 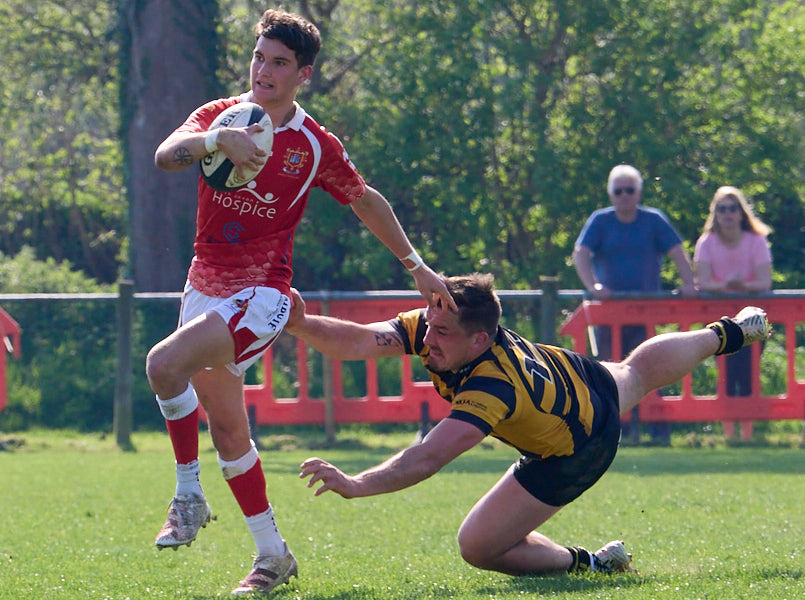 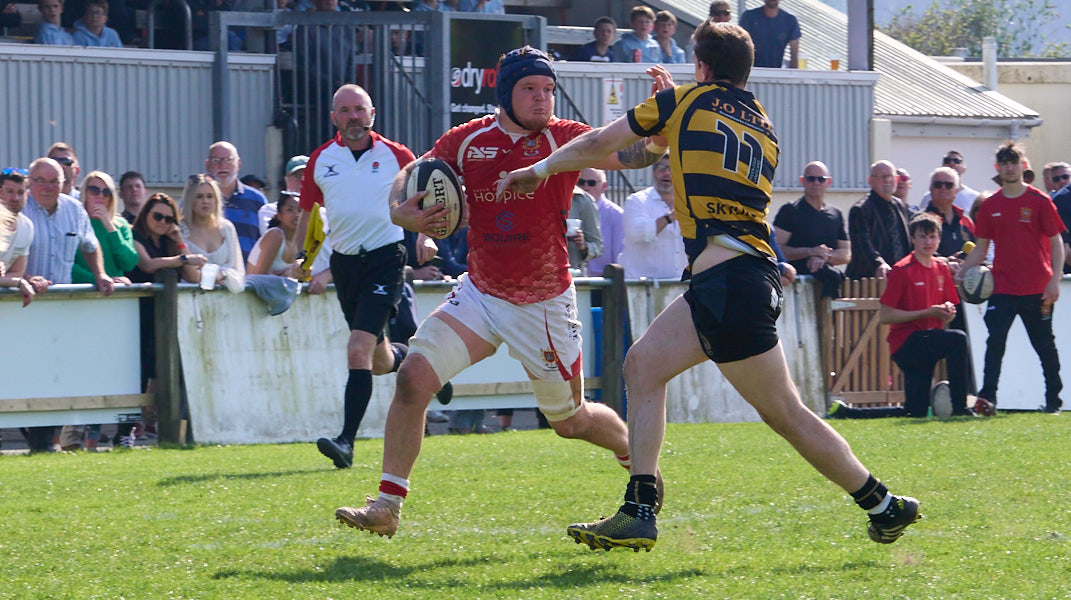 What a great day to watch some rugby yesterday, the sun was shining, junior rugby being played beforehand and a quiet expectation from a fairly large crowd as two evenly matched teams took to the field. Barnstaple rugby were also privileged to have a representative from the British Red Cross Clare Campbell-Lamerton and her husband who received the donations collect several weeks ago by the generosity of Barnstaple Rugby’s brilliant supporters.

The game kicked off with the Chiefs making the early running causing Hinckley to concede some early penalties which Jake Murphy put one of between the uprights to give Barnstaple an early lead in the 5th minute. Barnstaple continued to boss the first half creating pressure and winning penalties all the while being very careful of the Hinckley full back who was full of pace and looked dangerous all game. Yet despite the Chiefs pressing Hinckley their line outs let them down too often with a swirling wind adding to the complexity. Yet it was one of these lost line outs that gave the Chiefs their only try of the game when the Hinckley 2nd rower won the aerial battle to tap the ball back to his side but Ryan Smale was the quickest off the mark to touch down the loose ball as it bounced in the oppositions in-goal area and with Jake Murphy’ conversion the Chiefs held a 10-0 lead id way through the half. 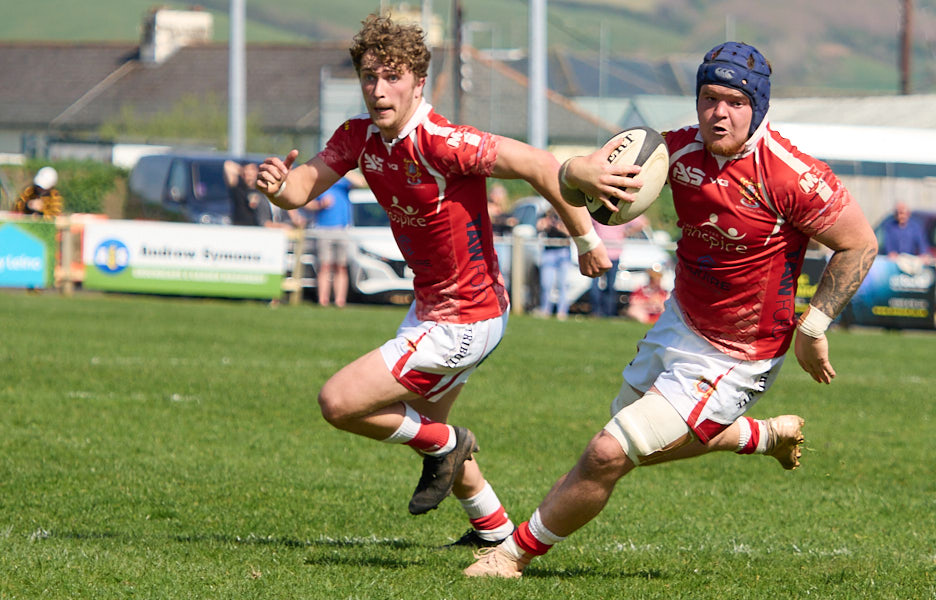 What was becoming obvious at this point was how strong the Hinckley pack were in the scrum and the Chiefs did struggle at times to contain them but it was the Chiefs in open play that dominated proceeding and another try looked on the cards as Kyran found himself with a chance 10 yards out following some good work from Winston and Josh Pilkington to make the space only for the Hinckley defence to successfully hold the ball up and so the Chiefs on a high went in at half time leading 10-0.

Hinckley came out for the second half more purposeful and put the Chiefs under a period of pressure as they looked for their opening score but the Chiefs defence stood waiting to get back the initiative, and what was nice to see until the last ten minutes that is, was the Chiefs giving away a lot less penalties than previous matches, but you can’t hold forever and after nearly 20 minutes a penalty was slotted over by Hinckley.

This time though I was Barnstaple who now took the initiative and almost immediately opened the gap back to 10 points with another Jake penalty and then following some more determined defensive work Tyler broke a tackle and raced into the gap to loft a pass to Winstone wth space to run and with Connor Swan outside him the ball was offloaded in the tackle and only a brilliant last ditch tackle stopped Conner from scoring a try. With ten minutes left Hinckley really pressed hard looking for that elusive try and a 5 yard scrum gave it to them as it push over for the try, which to be honest their pack probably deserved. The a couple of minutes of madness which saw one of the Chiefs yellow carded although no one could see why and it almost looked my claim that we had this match nearly jinxed the result but fortunately for my blushes the Chiefs defence were again awesome and Barnstaple got its second consecutive home win of the season. 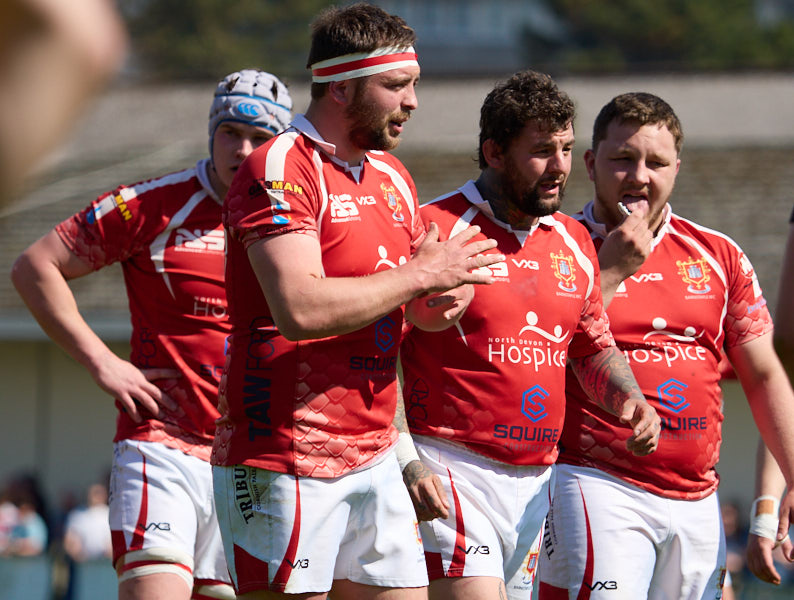 This very much validates both Bryn and Jeremy’s faith in this young squad knowing that game time and experience would produce results and if ever there was a season to do it this was it. Except for the last 10 minutes they kept the penalty count down and didn’t get on the wrong side of the ref as in some previous games. The continuity was excellent between the players and there are some promising times coming. However as with everything there were some negatives and the main one was the line outs which were to put it politely not good, yes the swirling wind played its part but that was for both teams and Hinckley handled it better than we did, hopefully a one off.

And that just about sums it up, next weekend it’s off to Cornwall and Redruth for what will be a very tough game as Redruth are still in with a chance of promotion with Esher entertaining Worthing and Redruth will absolutely be looking for maximum points out of this one. Then it is Clifton for the last game of the season the following week with kick off for that one at 3pm, yes I know extra drinking time, and don’t forget to start thinking about who your player of the season is this season, a tough choice I know.

Next Sunday is also Cup final day for the Colts down at Kingsbridge kick-off is 3pm and if you’re thinking of going there are plenty of seats available on the coach £10pp. To pay for your ticket(s) please bank transfer your payment to the account below! Please use your surname as a reference.

That just about wraps up what was another enjoyable weekend for Barnstpale Rugby and I will catch up with you call next weekend.