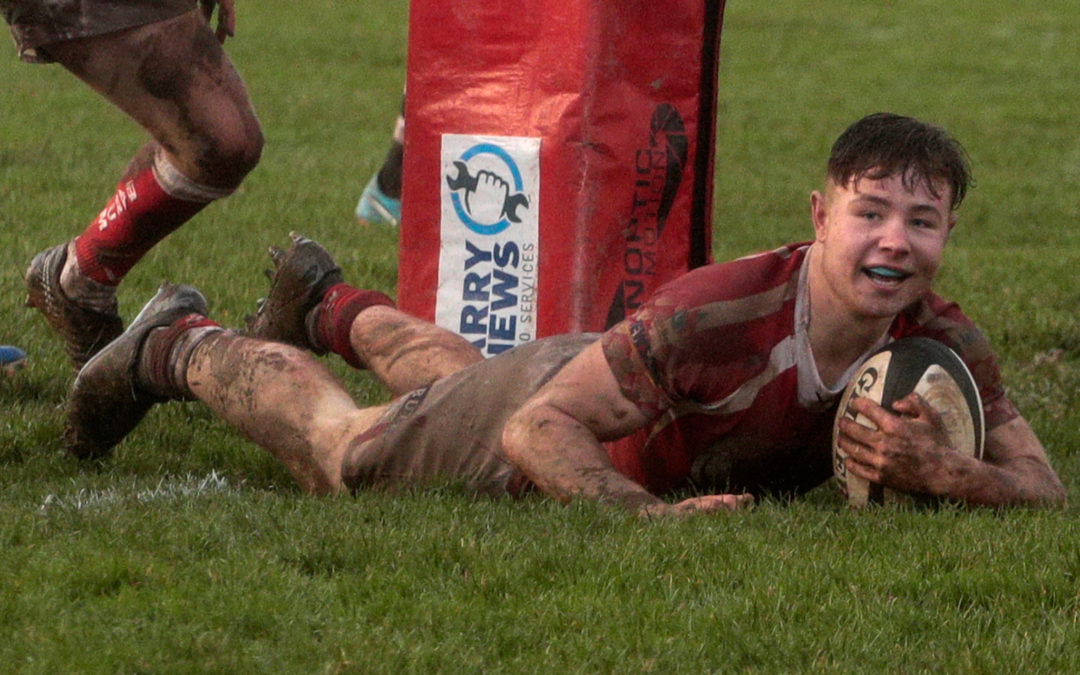 A nice solid start is just the way to start off the New Year and Barnstaple definitely produced that today, nothing fancy or flash just some good solid rugby in very muddy conditions. After 4 weeks of not having played competitive rugby it was always going to be a tough game against a much improved Brixham side and so it proved as the visitors took the Chiefs on right from the start and dominated possession for the first 15 minutes. It was to be expected that they would come out all cylinders firing and so they did only to be meet with Barnstaple’s superb defence. It was that defence, which was fantastic again, that won the match for Barnstaple not giving an inch and by the full time whistle had conceded just three points. 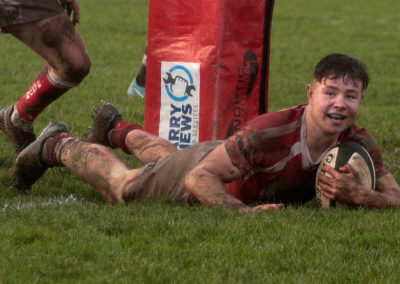 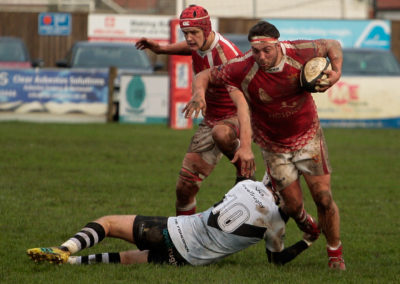 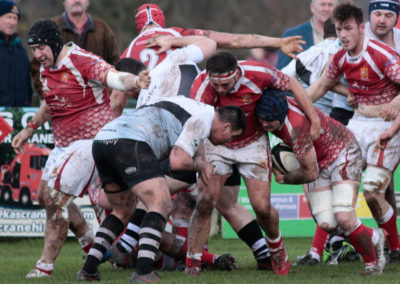 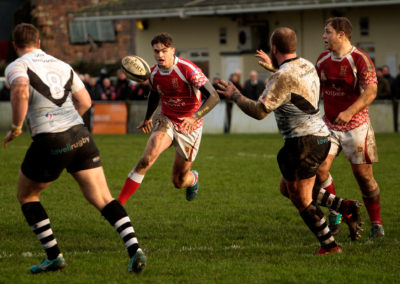 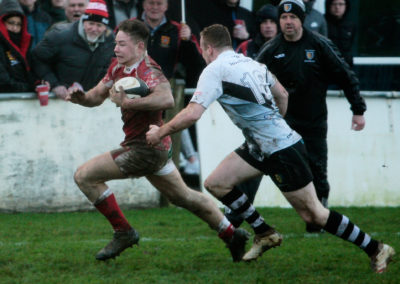 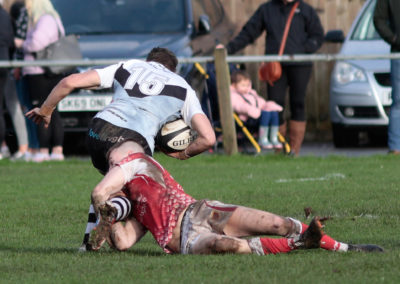 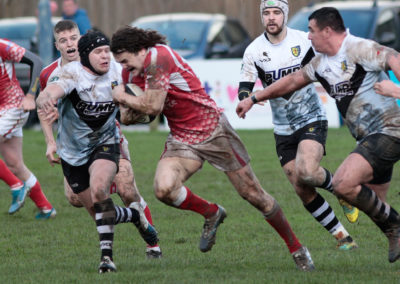 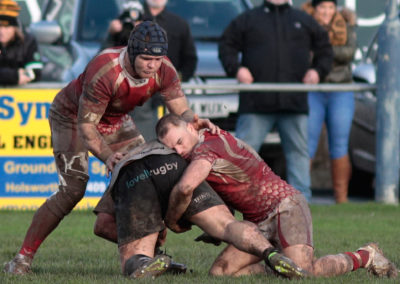 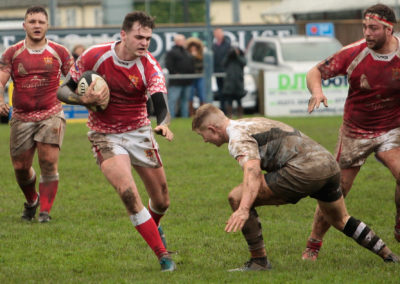 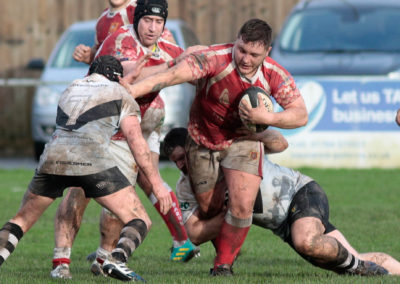 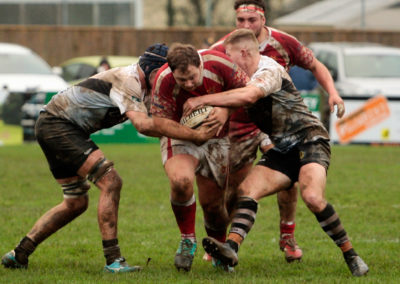 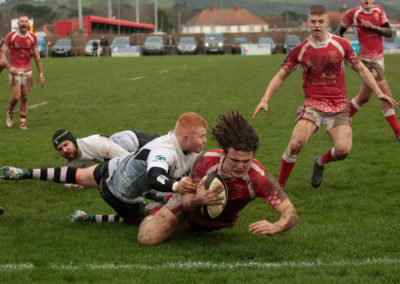 Barnstaple began their assault following those fifteen minutes, helped it must be said by a Brixham side that did give away too many penalties throughout the game. The Chiefs took their time going through the phases, probing for a way through what was a very good Brixham defence, until they secured the first three points of the game following another Brixham infringement. Kyran McManus slotted the penalty in the 19th minute for the first points. Then came a period of kicking by both teams to gain some advantage as the conditions underfoot became heavier. Another piece of sustained pressure from Barnstaple with some slick handling and 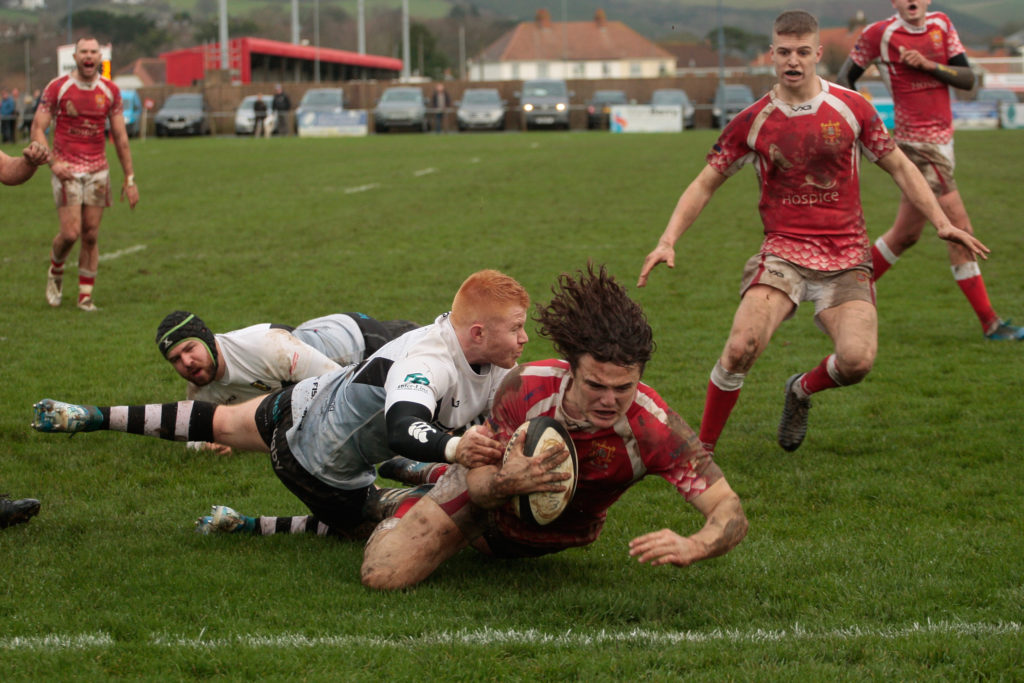 quick ball from the ruck saw Ryan Carter power his way through the Brixham tacklers for Barnstaple’s first try. Just before the break Kyran added a further three points to increase the Chiefs lead to 11-0 when straight from the kick off Brixham with their first piece of pressure since the first quarter earned themselves a penalty and their first and only points of the game from the following penalty kick. A very enjoyable rugby first half then saw the Chiefs go in 11-3 ahead and the Barnstaple faithful breathing easier as they saw that the four week break had not unsettled the Chiefs drive.

The second half started as the first with Brixham on the front foot but again the Chiefs defence was far too good for them and it was Barnstaple that made the significant advances. More good possession and good handling saw Dylan Gosling out wide and with some space speed past two defenders before being tackled into touch just a couple of yards short of his first try for the Chiefs. More penalties from Brixham enabled the Chiefs to drive forward for another try this time by Brendon Darley unfortunately the play was called back as the Referee had already whistled for a Brixham infringement and the try cancelled. Almost immediately Will Topps was thwarted short of the line as Brixham’s defence worked tirelessly to keep the Chiefs out. 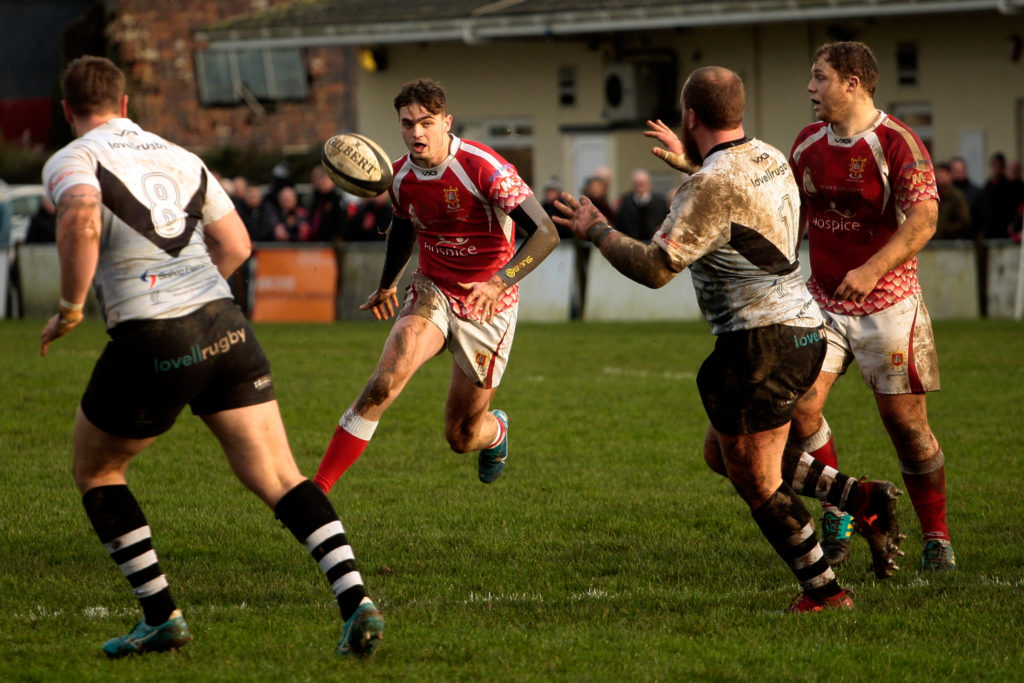 Unfortunately the game became a bit of a stalemate as the conditions worsened underfoot and again the opposition began to get under the Chiefs skin and with a flurry of handbags thrown saw both Captains yellow carded to try and calm tempers. It was when both teams were down to 14 that young Dylan Gosling provided us with some magic following another charge by the Chiefs. A jinking run followed by a step that left two defenders sliding the wrong way and a gaping hole for him to dive over, Dylan scored his first try for the Chiefs to increase the lead to 18-3 and with still 25 minutes to play. Another yellow this time for Will Topps did mean that Barnstaple would play a man short for another 10 minutes and it was now essential to secure the result and make sure Brixham couldn’t find a way through as they made their final push for a try and so the game ended with a very satisfactory win. 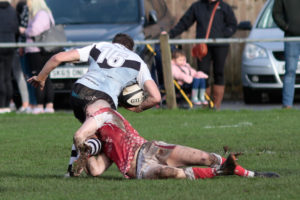 There isn’t a lot to say about the game other than what I have already commented on except that I cannot praise the Chiefs defence highly enough, every game it gets better and the tackling is immense. There was a potential fall from grace for this one given how well Brixham played but the lads were focused, keen and above all well-disciplined, at least for the first 55 minutes, letting the opposition make the mistakes, but above all they were patient looking for the win first before any bonus points.

Much could also have been said about Weston Super-Mare who themselves had a tricky game against a visiting Camborne having not played for 5 weeks themselves and it appears from the result they too settled for a solid performance as they narrowly beat the Cornishmen 14-10 to keep pace with the Chiefs. Maidenhead had a massive win over Exmouth 44-27 to put them within just 1 point of Barnstaple. Exmouth though now find themselves in the bottom three as Launceston leapfrogged them following a terrific win over visitors Ivybridge 20-16 and this could be their year if they can continue their home form.

Exeter Uni got only their 2nd win on the road as they beat Newbury Blues 21-36 to go third, which might just encourage more from them on the road now they are in contention. Finally  Okehampton continued their 100% home record with a nice win over visiting Drybrook 23-11 which now sees them enter the top 6 for the first time this season and given their home record I suspect they will be there of thereabouts come April.

Next up for the Chiefs is a trip to Camborne next weekend who have only lost once at home all season and have also beaten WSM albeit by just a point 15-14. So a difficult task for the Chiefs and it doesn’t get any easier as they still have to visit all five teams below them for the second half of the season and so the journey to the title will most certainly be an uphill one. 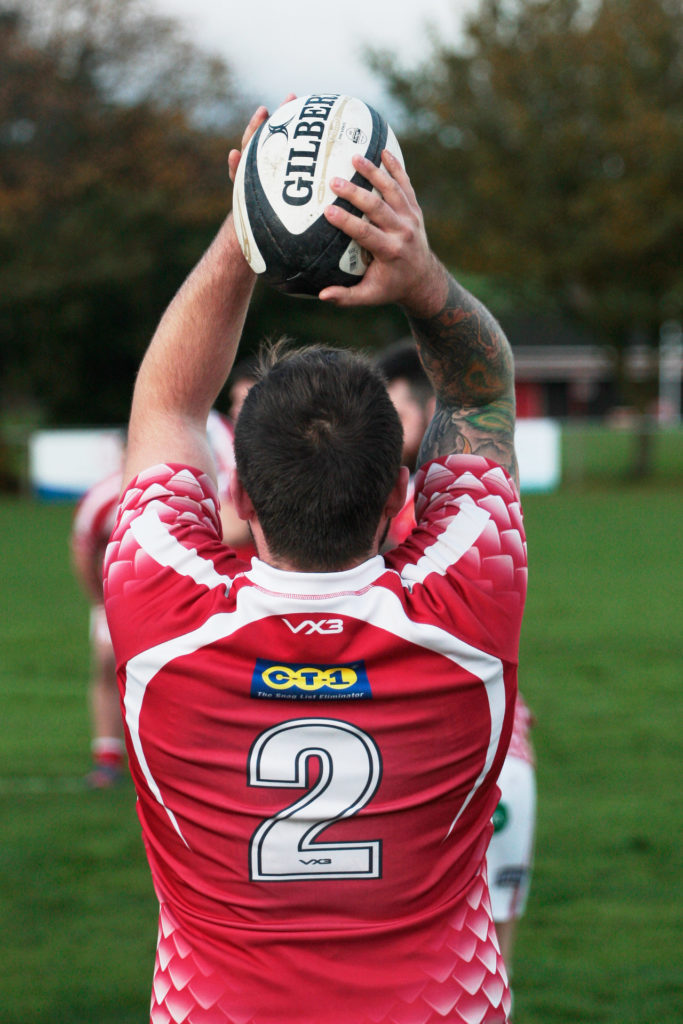 Athletic came away from Brixham with a cracking result to continue their dominance of the Merit Table 1 as leaders claiming all five points with a 10-55 win. Team performance according to head coach Scott Warren was outstanding although they did frustratingly allow two sloppy tries against them.

We spoke at training about being top at Christmas doesn’t mean anything and we have to keep the momentum going and carry on where we left off and accept the challenge of Brixham away which is never a nice place to go, but the boys stepped up scored 9 tries and come away with all 5 points. Our set piece was the best I have seen it so far and something Brixham really struggled to contain which really set us on the front foot.

Scott also give massive credit to the young colts, Brandon Moore, Jamie Mclagan and Ben jago who came into the squad for the first time today. They fitted straight in with the rest of the team and didn’t look out of place on the field which is huge credit to them and a massive positive for the senior side.

Athletic now prepare for the huge game they have at Pottington next weekend as they welcome second place Devonport Services, currently the only side to have beaten them so far this season, in what will be a clash of the titans. Kick-off is 2pm and we really need as many supporters as possible to bring the Barum roar to the Tic’s 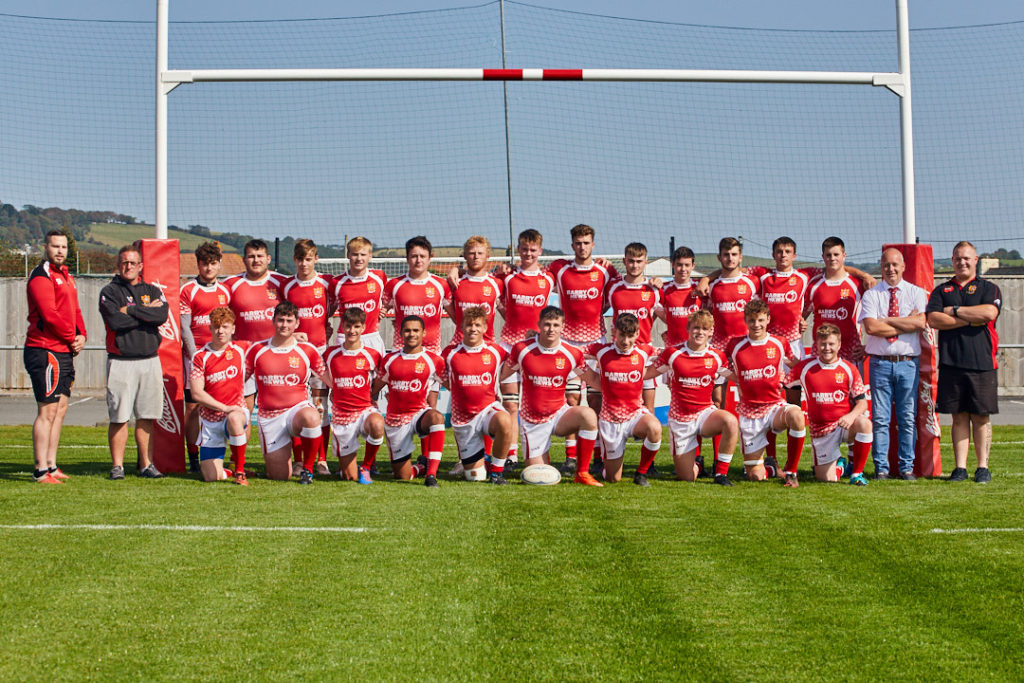 The Colts had their final friendly before getting back into competitive action next weekend as they welcomed Brixham Colts to Pottington Road. The first half was played uphill and Barnstaple led at the break 21-0 before completing the rout with a 56-0 win. Although it looks like a big score as Colts manager John Mclagan emphasised Brixham played well in was just a case that Barnstaple outplayed them all over the pitch.

So it’s back to competitive action next weekend as the Colts have back to back home fixtures against Cullompton Colts next Saturday and Exeter Saracens the following Saturday. Both kick off at 2pm.

That about wraps it up for another weekend with plenty more on the horizon. Well done to all our three teams for giving Barnstaple a great weekend to be proud of. The next Chiefs home game is on 18th January against Drybrook. Catch you all next time.