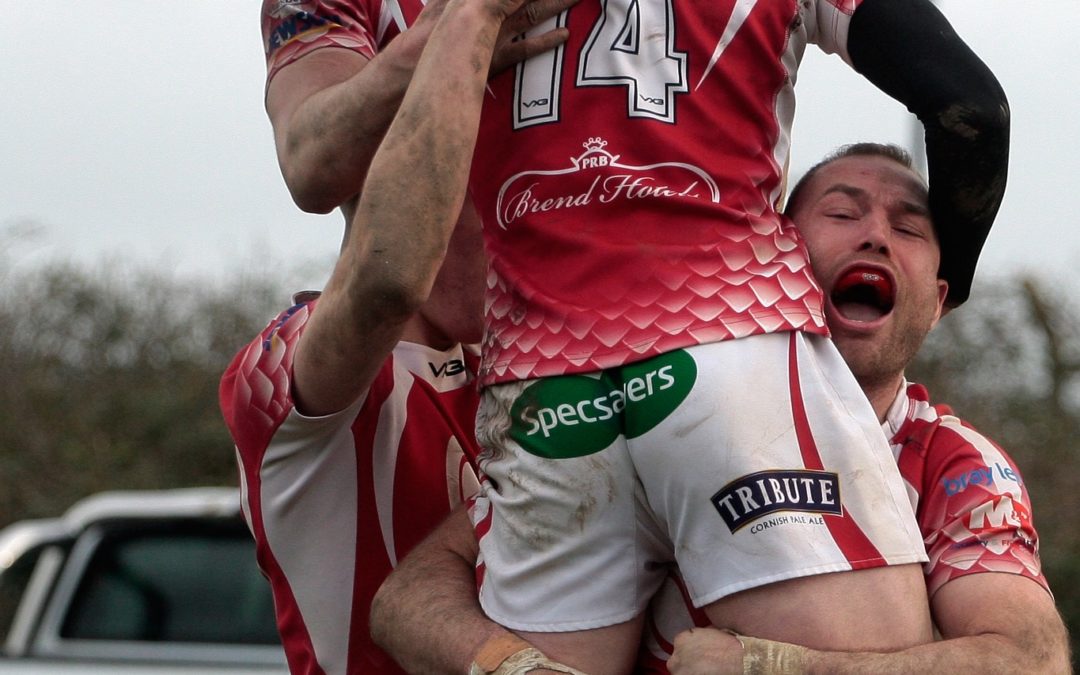 Barnstaple maintained their 14 point lead over Weston Super-Mare with a strong performance against old rivals Exmouth at Pottington Road yesterday and continue to dominate at the top of the South West Premier league. This fixture was always going to be a difficult game for Barnstaple especially as captain Winston James and centre Ryan Carter were still unavailable, added to that was the last minute unavailability of James Starkey and a jiggle of the front row was needed. Thankfully the return of Martinas and George Snell to the front row, Martinas moved to hooker for this one, and Ben Hilton and Adam Lloyd to the second row brought a lot of cheer for the large crowd that attended. Also on show was new signing Dan Johnson who started from the bench, a winger / full back originally from South Molton but recently plying his trade at Taunton, Dan has also represented Devon U20’s. One thing is for sure he will surprise you when you first meet him as Dan is almost as tall as Matt Gohl and I for one was not expecting such a tall winger. We did get to see some glimpses of how good he will be when he came on for his debut in the 2nd half and showed what he is made of. 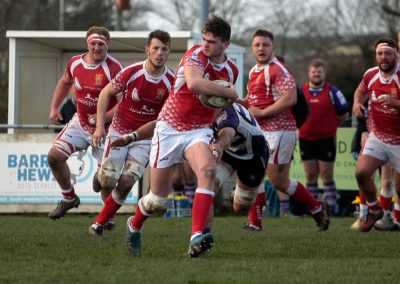 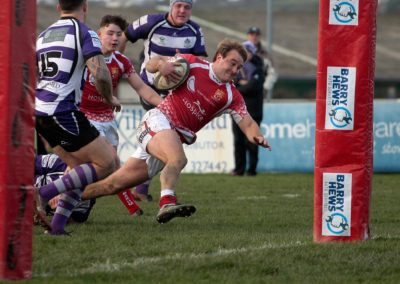 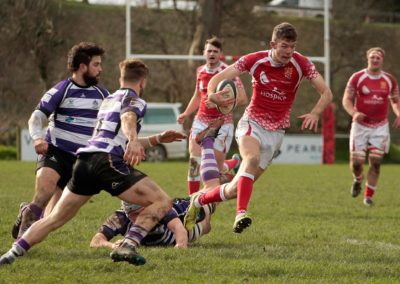 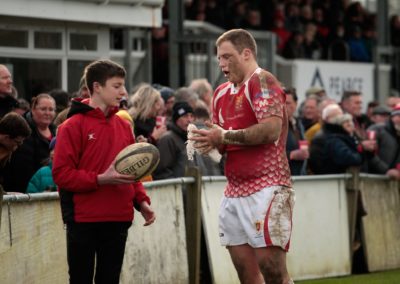 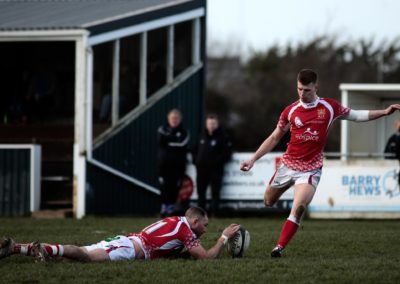 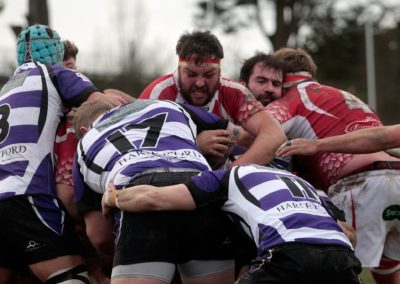 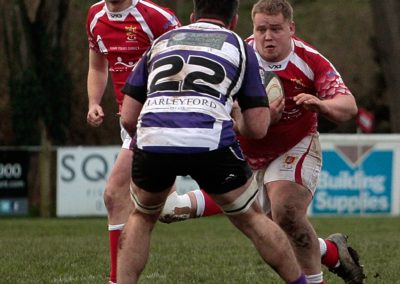 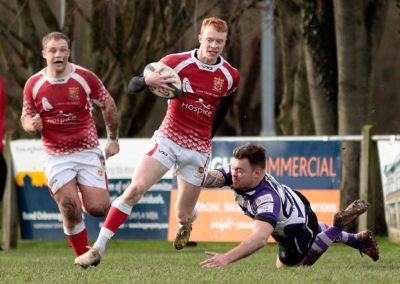 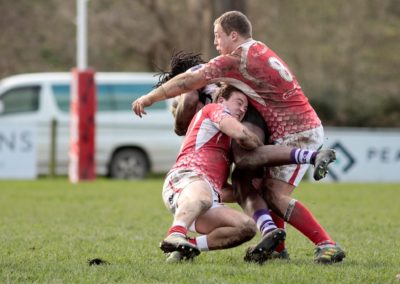 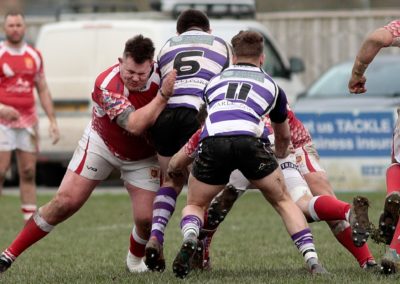 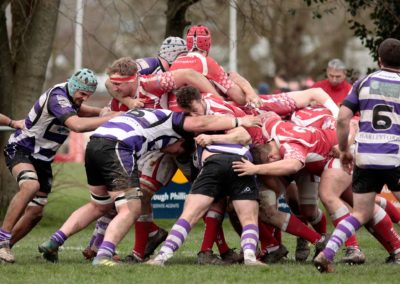 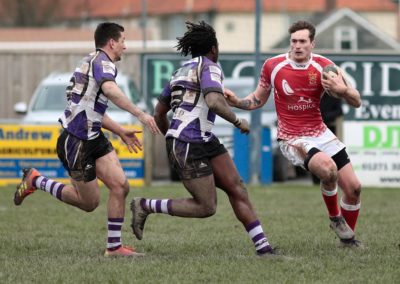 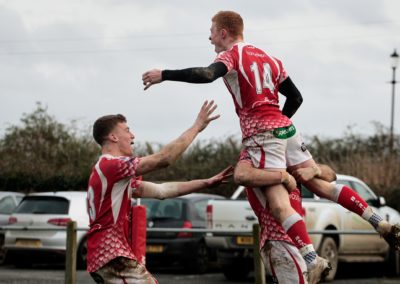 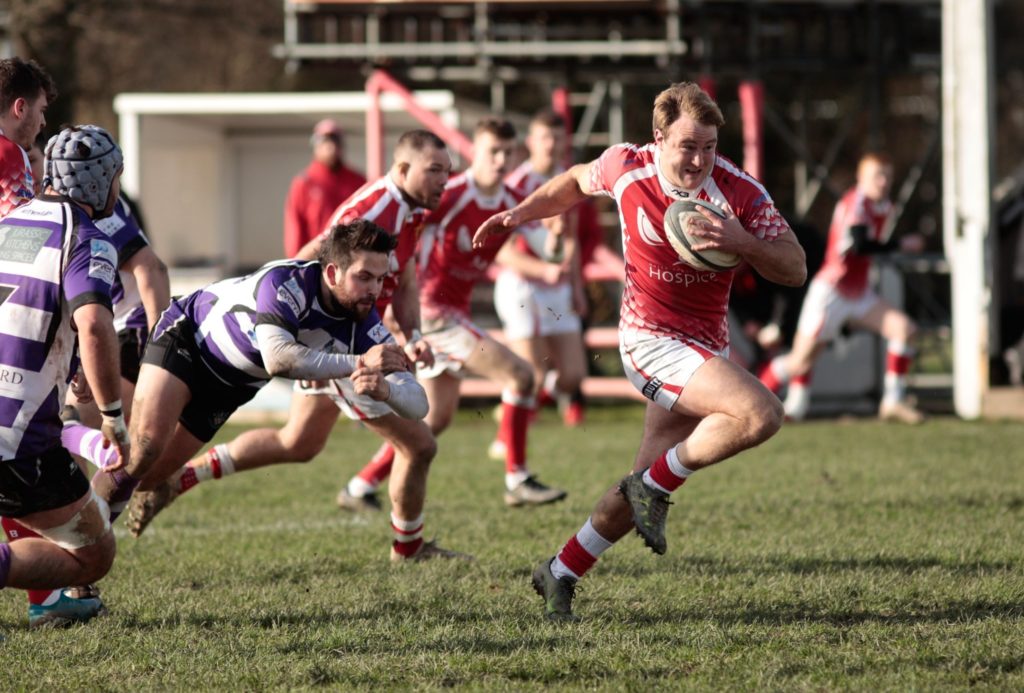 The start of the first half both teams had good possession with Exmouth probing the Chiefs defence on several excursions in the first 10 minutes but as every team has felt this season came up against the proverbial brick wall of the Chiefs defensive line. Barnstaple scored first when a pass to Kyle Spear now at centre, near the half way line saw him burst through the middle into space and make it to the 22 before the heavy turf got the better of him. The support was good and with quick ball Dylan shipped the ball to the left to where the overlap was a couple of passes later Haydn Lidstone had a relatively simple run in for the Chiefs first score. Seven minutes later and following some good Barnstaple pressure Kyle Spear again found his pace taking him through the middle of the Exmouth defence this time to score under the posts and with Kyran McManus’s conversion the Chiefs were 12-0 up at the quarter mark and seemingly cruising, two attacks in the oppositions 22 and two tries. Again following a brief Exmouth spell of possession the Chiefs had another opportunity to further extend that lead when they had a 5 yard line out from a penalty. A couple of more penalties from within their 5 meter line resulted in the first yellow for Exmouth and a third try should have been up for grabs.

It was here though that the Chiefs discipline took a nose dive as unable to score the try through several attempts Barnstaple then started giving away to many penalties to relive Exmouth of the pressure we were building. Why this happens especially when the opposition goes down to 14 men is beyond me, perhaps we are just too eager to capitalise on the advantage and just stray with our discipline slightly and it is only marginal calls to be honest. This is perhaps the only negative comment I have about the performance, especially in the first half when we had Exmouth on the ropes, we gave them too many opportunities to relive pressure. It really did become obvious today in part because we have been exemplary for most of the season. But I suppose it was to be expected when playing Exmouth, these games never go to plan, however we should have adapted quicker. It wasn’t long before the Chiefs penalty count finally earned them the first of two yellows when Matt Gohl was judged to have offended at the ruck. This gave Exmouth, now back to full strength, to mount an assault which on the stroke of half time they did when despite some solid defence from the Chiefs Exmouth scored their first try to leave Barnstaple 12-5 up at the break. 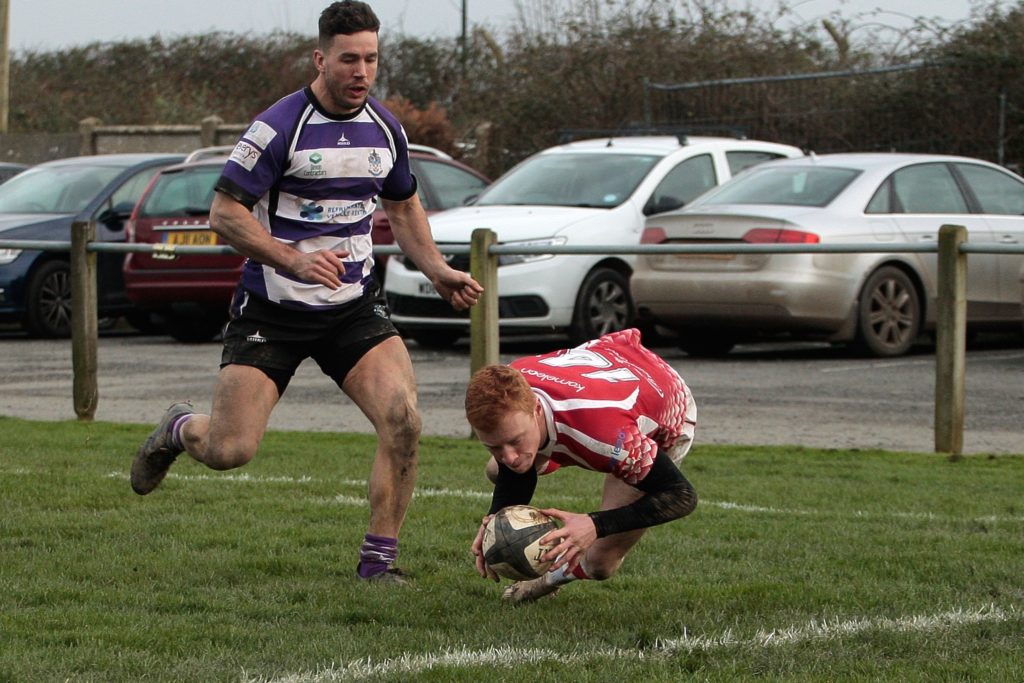 The second half saw the chiefs start brightly again and regain the momentum and it was Casey George scoring his debut try for Barnstaple following a catch and drive from the line out after 10 minutes. Exmouth managed to reduce the Chiefs lead to a converted try when inside their own half their winger had a one on one and flew past the Barnstaple defender almost making to to the try line before Ryan Lee got in an important tackle to stop the try. But having won the lineout Exmouth drove the ball over for their second try. The game looked at this point settle at this score as both teams tended to cancel themselves out with Exmouth’s defence putting in a very good shift at this point to keep Barnstaple at bay. But there is only so long you can keep the Chiefs relentless pressure at bay and it was for me the best piece of rugby of the day that saw a magical piece of skill and vision by Will Topps, now at centre, that opened Exmouth up. Noticing that Josh Bolt had a one on one to his left kicked Will kicked the ball through for the youngster to collect. Josh already beating his man deftly controlled the bouncing ball with the inside of his foot pushing gently towards the try line to then pick it up and score the forth try and earn the Chiefs their bonus point.

And that’s how the game ended with Barnstaple showing much more desire to win and scoring from some really good rugby. Of course the icing on the cake was how they scored the final try but with good quick ball consistently coming from the scrum half and players running onto the ball at pace this was a good solid performance. Exmouth’s defence which played well helped to keep the score respectable as need the high penalty count which the Chiefs will need to rectify before their trip to Ivybridge next Saturday.

As for the Devon Cup, this result has guaranteed Barnstaple a finalists spot to try and retain the trophy, however it doesn’t yet secure home advantage. As the positions stand Barnstaple are on 35 points, 15 points clear of Okehampton on the same number of games but more crucially 17 points ahead of Brixham who have two games in hand. This means that the Chiefs can have a maximum of 45 points by the season’s end while Brixham could have a maximum of 38 points if they win all their remaining games with bonus points. As it stands we are still favourites for home advantage but we still need four more points to ensure it.

In the South West Premier League the Chiefs maintain a 14 point advantage over Weston Super-Mare who won their home game against Ivybridge 26-7 to keep the pressure on Barnstaple, but the Chiefs now have a 15 point lead over Maidenhead who lost 25-22 at Newbury Blues. What is it with this team at Newbury who this season at home have beaten all three top teams and yet are still second from bottom in the league, I can’t explain it.

Exmouth have seen themselves dragged back into the bottom three following their loss and Launceston inflicted Okehampton’s second home defeat almost immediately after their first two weeks ago, this time losing 15-21 and giving the Cornish All Blacks a lot of momentum going into the last few games. Whilst Bracknell stay rooted at the foot of the table losing at home to Exeter Uni 12-40, Brixham got a confidence boosting home win when they beat Drybrook 21-16 and that result now sees them climb into the top 6 in the league something many of us thought was out of their reach during the first half of the season.

So that about wraps up another great weekend for Barnstaple Chiefs with all five points secured next up is a trip to Ivybridge and it would be great to get as many supporters there for this one, if the Chiefs win on the plastic pitch at Cross-in-Hand then they secure home advantage for the Devon Seniors Cup and can then relax and concentrate on the South West Premier title for the rest of the season. Then it’s off to Bracknell for the rearranged fixture before the Chiefs return to Pottington Road on Feb 29th for the difficult challenge of Launceston.

Athletic were finally beaten following an 11 game winning run stretching back to last October when Exmouth exacted revenge after losing their home leg of this tie and beating Barnstaple in a very close game 5-14. This does leave Exmouth as slight favourites for the title as we come into the final weeks as they are currently 8 points behind with two games in hand.

Athletics next game is away to Ivybridge on Saturday and then its home for a meeting with Cullompton on the 22nd February.

The Colts had another big win this weekend, beating Bideford 0-50 which now extends their lead to 8 points at the top following Okehampton’s defeat at home by Cullompton.

Next up for the Colts is a trip to Crediton and then South Molton on the 15th and 22nd February respectively before they are back at Pottington Road on the 29th February against a very dangerous Cullompton Colts.