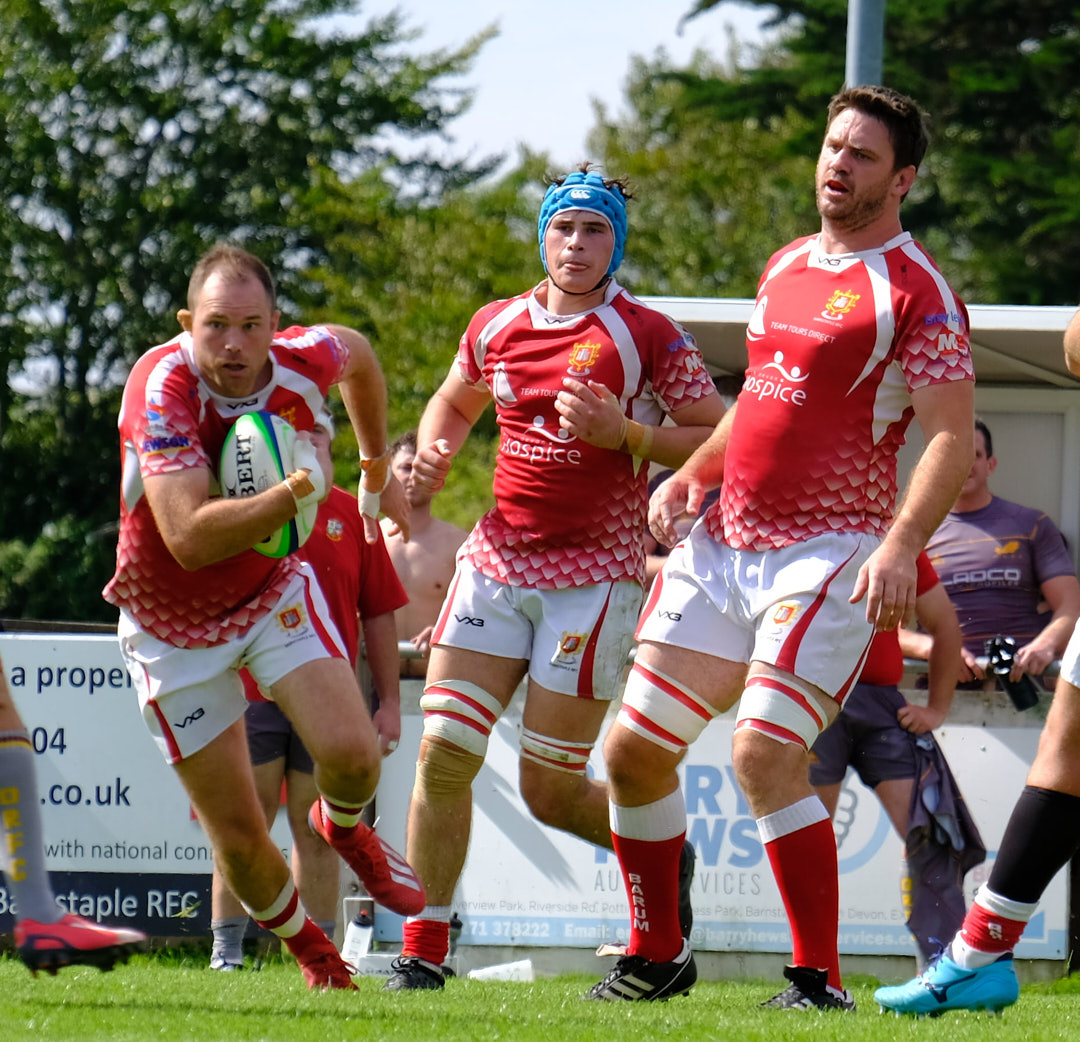 Another disappointing day for the Chiefs as they lose 64-22 at Esher. It’s always difficult to travel such distances only to return with such a heavy score line against you but there are some positives that I will come to later, but it is also worth remembering that this is a very strong Esher team and it was always going to be tough at their ground. It was also a trying day for the Colts as they travelled to Kingsbridge, a tough team on any day to face let alone on their home turf, and they also lost 0-33. But thankfully the Bucc’s, on their return to rugby after a lengthy absence, did win at home beating Chard, a really entertaining game to watch and watched it was by a reasonable crowd of over 100 spectators, more I think than attended the football match next door, so all was not lost.

But back to the Chiefs game and right from the off Esher came out all guns blazing scoring their first try in three minutes. The chiefs did rally at this point and Kyran slotted a penalty the reduce the lead to 4 but that is was obvious that Esher were targeting all 5 points for this one as their next penalty they elected to kick to touch rather than secure the three and although Barnstaple’s defence won a scrum 5 yard out it, Esher put in a massive shove to drive the Chiefs scrum backwards to score their second. Barnstaple continued to play their rugby but at this early stage Esher’s defence was just too strong and too well organised with little space for the Chiefs to break through. Esher’s two other tries of the half also came from the dominance of their scrum which continued for much of the game and at half time the home side led 24-3. One highlight of the first half for the Chiefs was seeing Ben Hilton, who found himself in unfamiliar territory out on the right wing, put a lovely 40 yard kick down the line to bounce once into touch Will Topps would have been proud of that one.

The second half began with a yellow card for Barnstaple and Esher took full advantage grabbing another try and actually collect a further four tries by the end of the game. But it wasn’t all one way traffic this half as the Chiefs answered this blitz with three tries of their own, the first of which saw the Chiefs from a line out drive the maul a good 20 yards gaining another penalty which again they drove the maul from the resulting lineout to give Flynn Elworthy his and Barnstaple’s first try of the day. Barnstaple’s second was again from a driving maul 5 yards out which sliced through Esher’s defence like a knife through butter this time.  Their third came at the end when awarded a penalty the Chiefs with hardly anything on the clock elected to go through a series of pick and go’s to give Flynn his second try of the day.

So a heavy defeat maybe but also some good rugby played by the visitors especially in the second half. Esher won this game through their dominance of the scrum and a very strong well organised defence which gave Barnstaple very few opportunities to capitalise on, especially in the first half. What opportunities Barnstaple did get they pressed the home side well and in particular Esher seemed to have no answer to the driving maul of the Chiefs when they got the chance to use it. The Chiefs didn’t play badly there wasn’t a string of poor penalties given away at crucial times or a lot of bad handling when there were chances on the line, it was just that Esher managed the game well in the areas where they were strongest and left little room to attack through. Barnstaple continued to play their rugby and looked good at times just a bit of fine tuning I reckon.

We have now played possible the two biggest contenders for the title on the road and got those games out of the way so the Chiefs can now concentrate more on what’s ahead of them. Realistically we were never going to get anything from playing both Clifton and Esher on their home soil and so to get these two fixtures out of the way so quickly the better. At the very least I think the signs for the Chiefs are still encouraging and the next few games will really show where we are at. So the Chiefs will need to brush themselves off and reset for next Saturdays home game against a Guernsey side who have had an impressive start to the season. The Raiders will be playing their fourth away game on the trot and so far have collected 10 points from 2 wins with just one loss on the road and currently find themselves in 5th place in the league. Yesterday they visited Ding’s Crusaders in a very close game winning there 31-34, so next weekend is going to be a very stern test for the Chiefs. Eshers other rivals for the title Clifton won at home with another thumping win beating Barnes 57-10 and do look impressive at home whilst another to watch out for in this title race is Leicester Lions who last week gave Clifton a tough game, ultimately losing 24-31, yesterday hammered Westcliff in Essex 17-50 scoring 7 tries.

The featured game of the National League rugby’s review show, Canterbury v Worthing, saw the home side finally grab its first win of the season 29-24, whilst old Albanians away and Bury St. Edmunds at home won their respective games 26-32 against Hinckley and 29-3 against Rochford hundred. This then leaves the league with Clifton, Esher and Old Albanians forging ahead with probably Redruth in there as well as their game against Henley was postponed. Barnstaple find themselves in 12th with the four team below them yet to win a game.

To watch the game in full click the link below