March 5th Match Day Round Up and Report 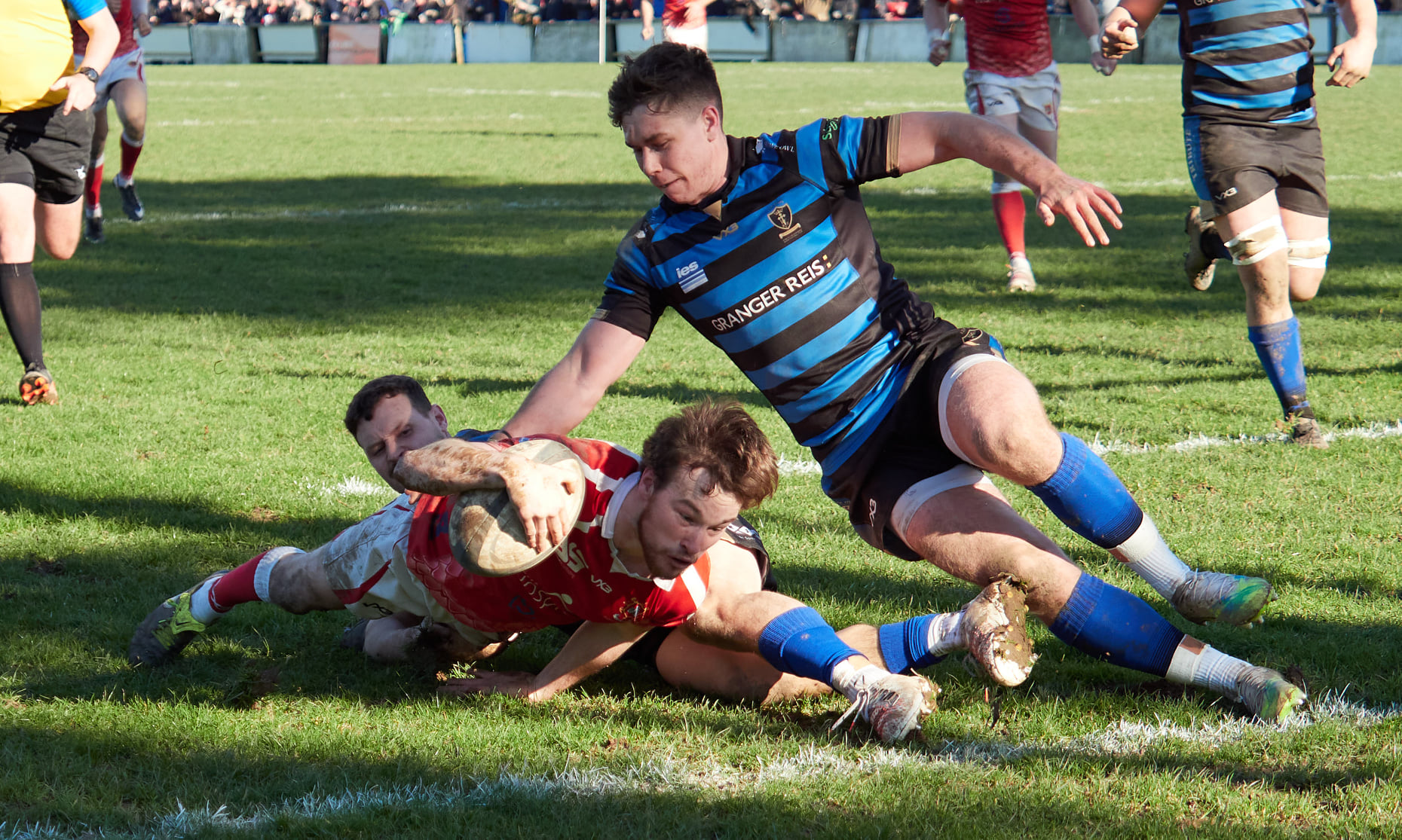 Good evening everyone and what a lovely day it was yesterday as the Chiefs prepared for their duel with Dings Crusaders. The sun was out for the first time in a while gently reminding us that spring is almost upon us whilst a very brisk northly wind chilled us into remembering winter hasn’t gone yet and a very good game of rugby which despite Barnstaple’s obvious disappointment in losing was an enjoyable game to watch. 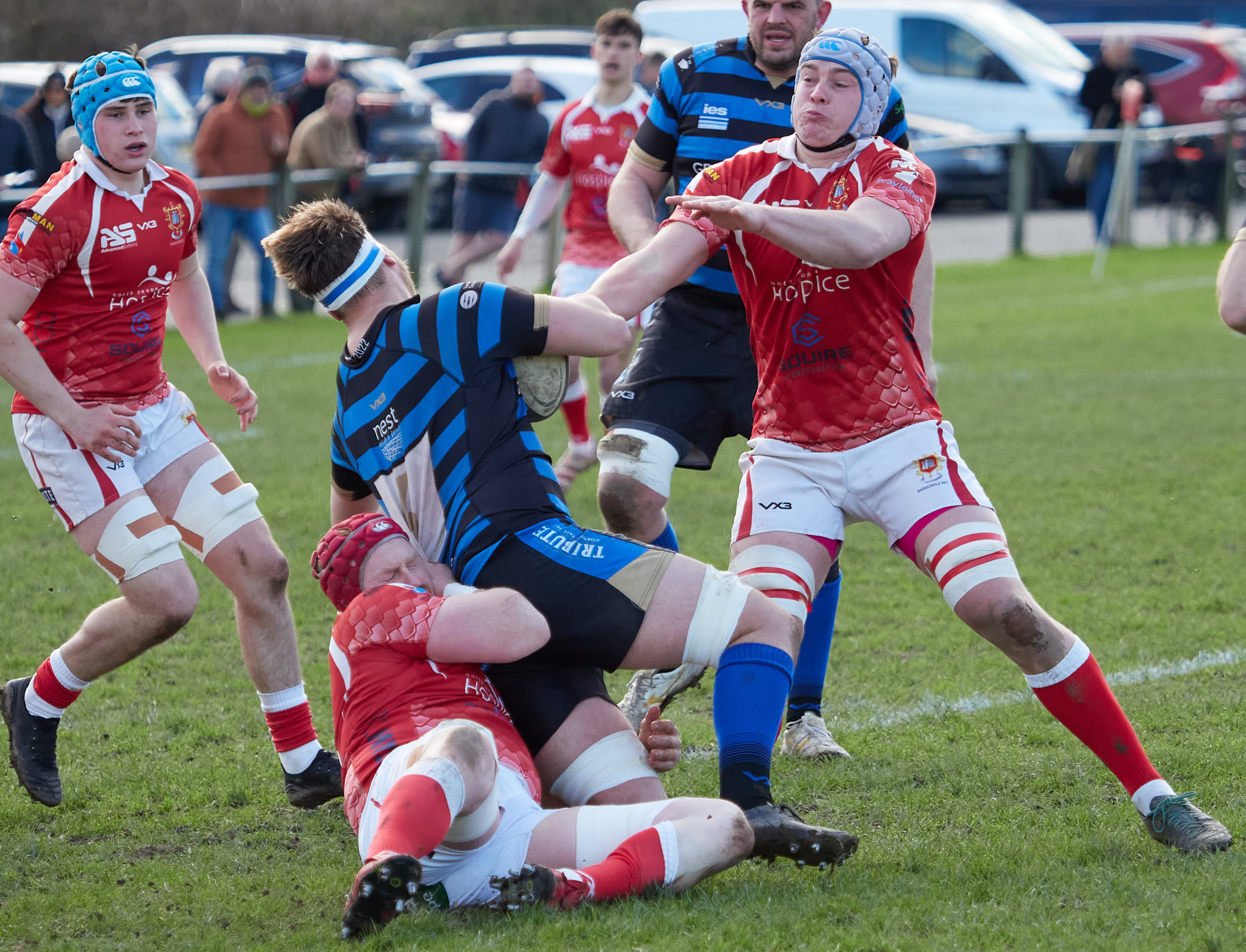 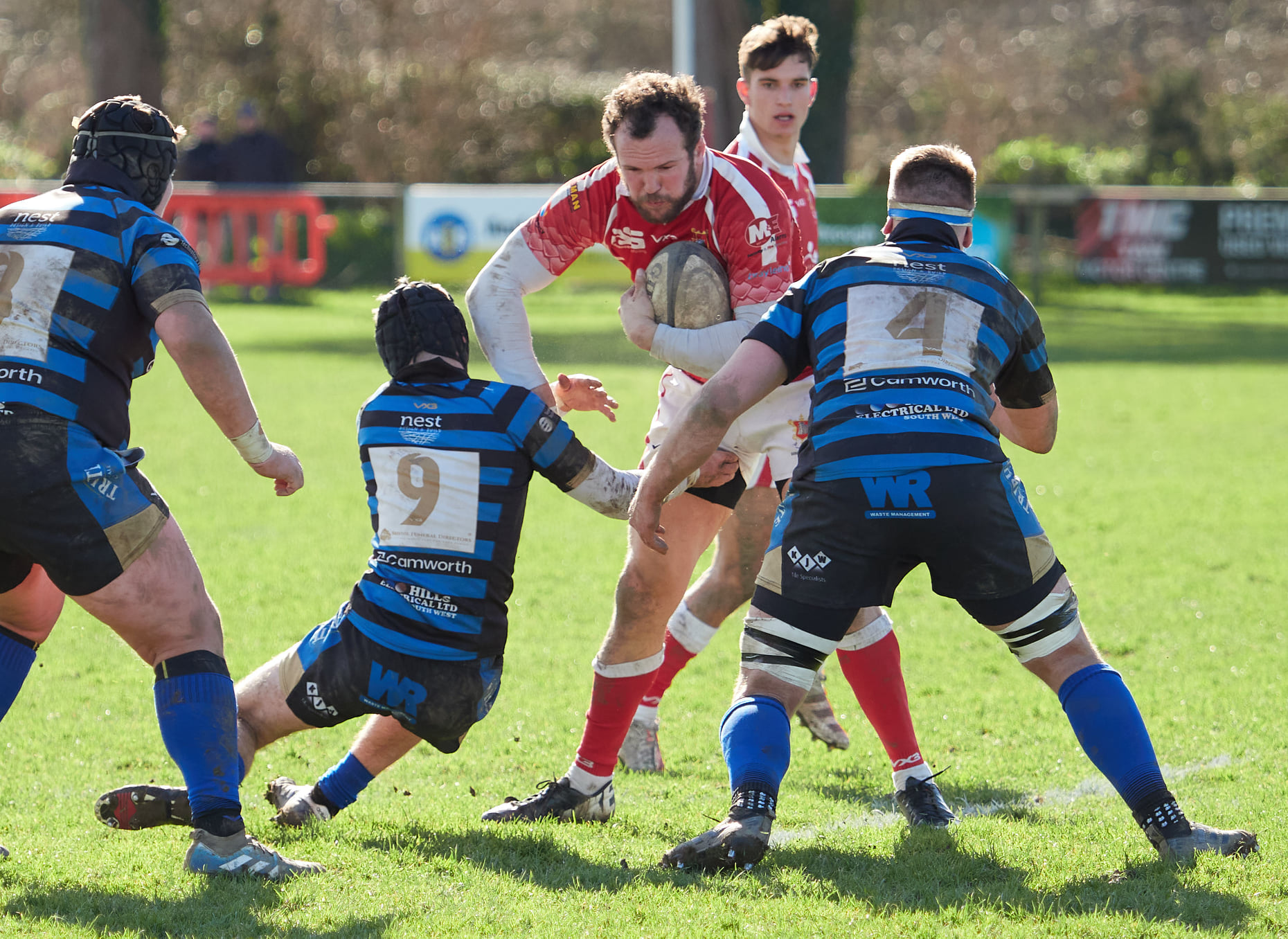 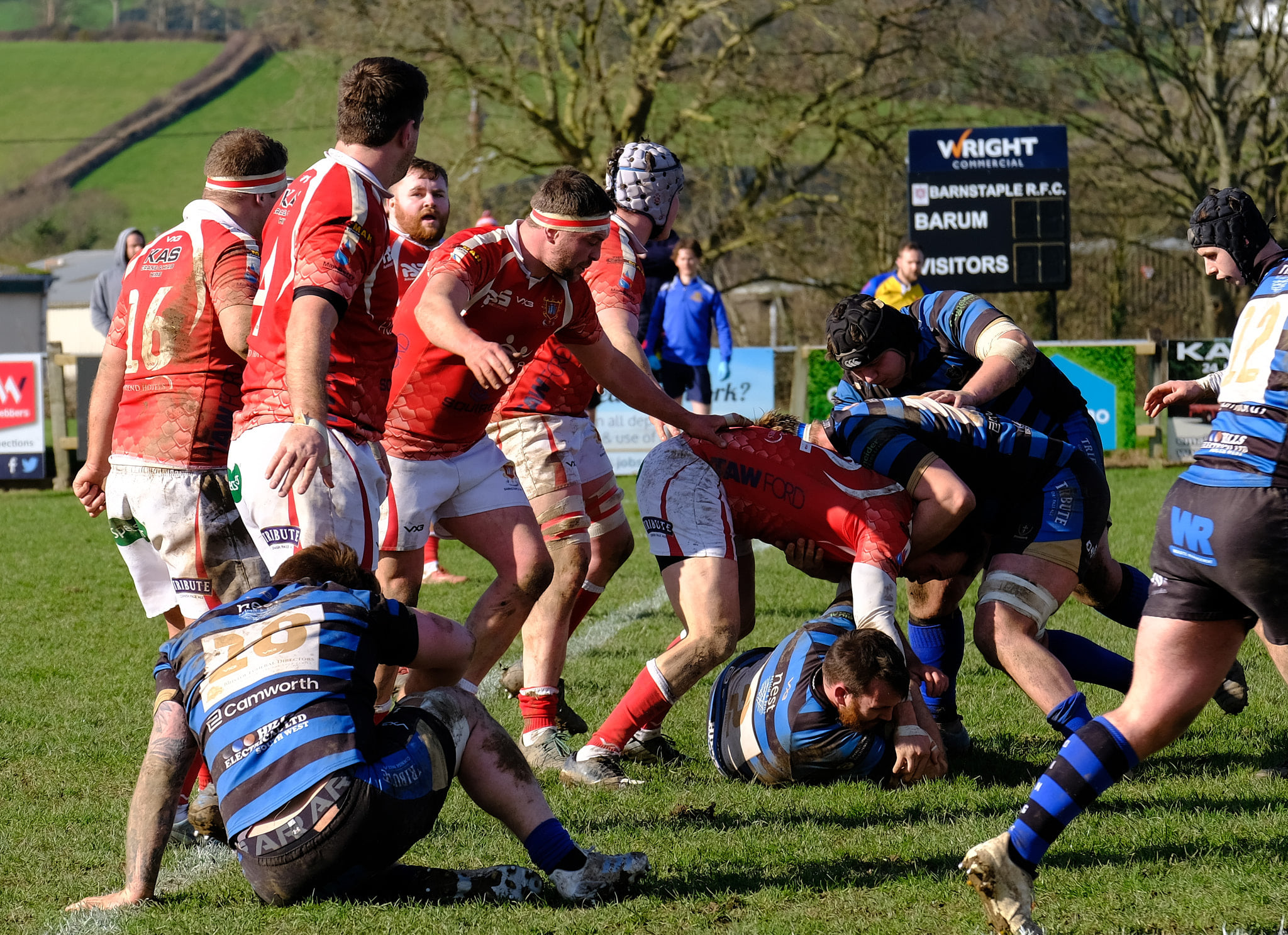 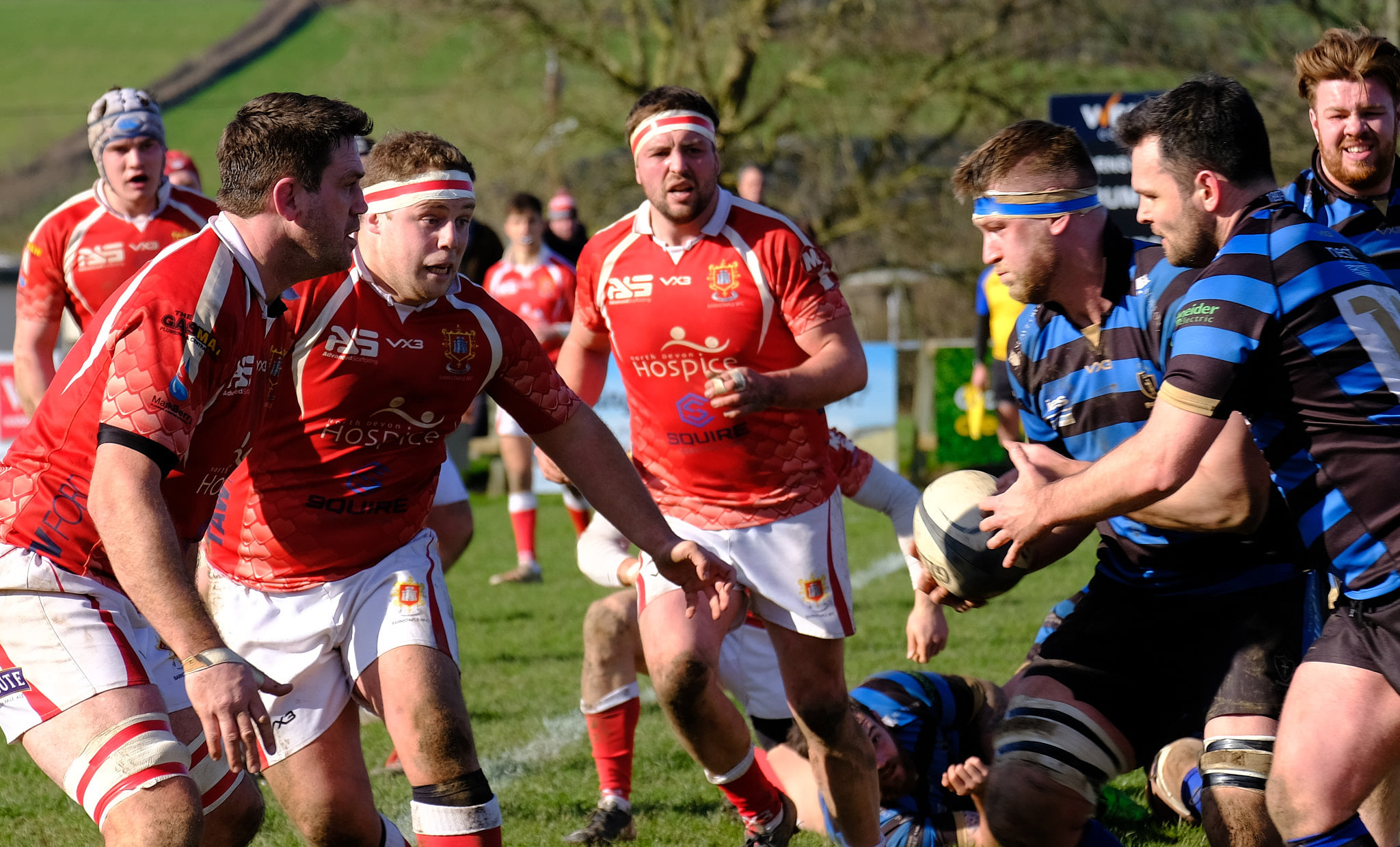 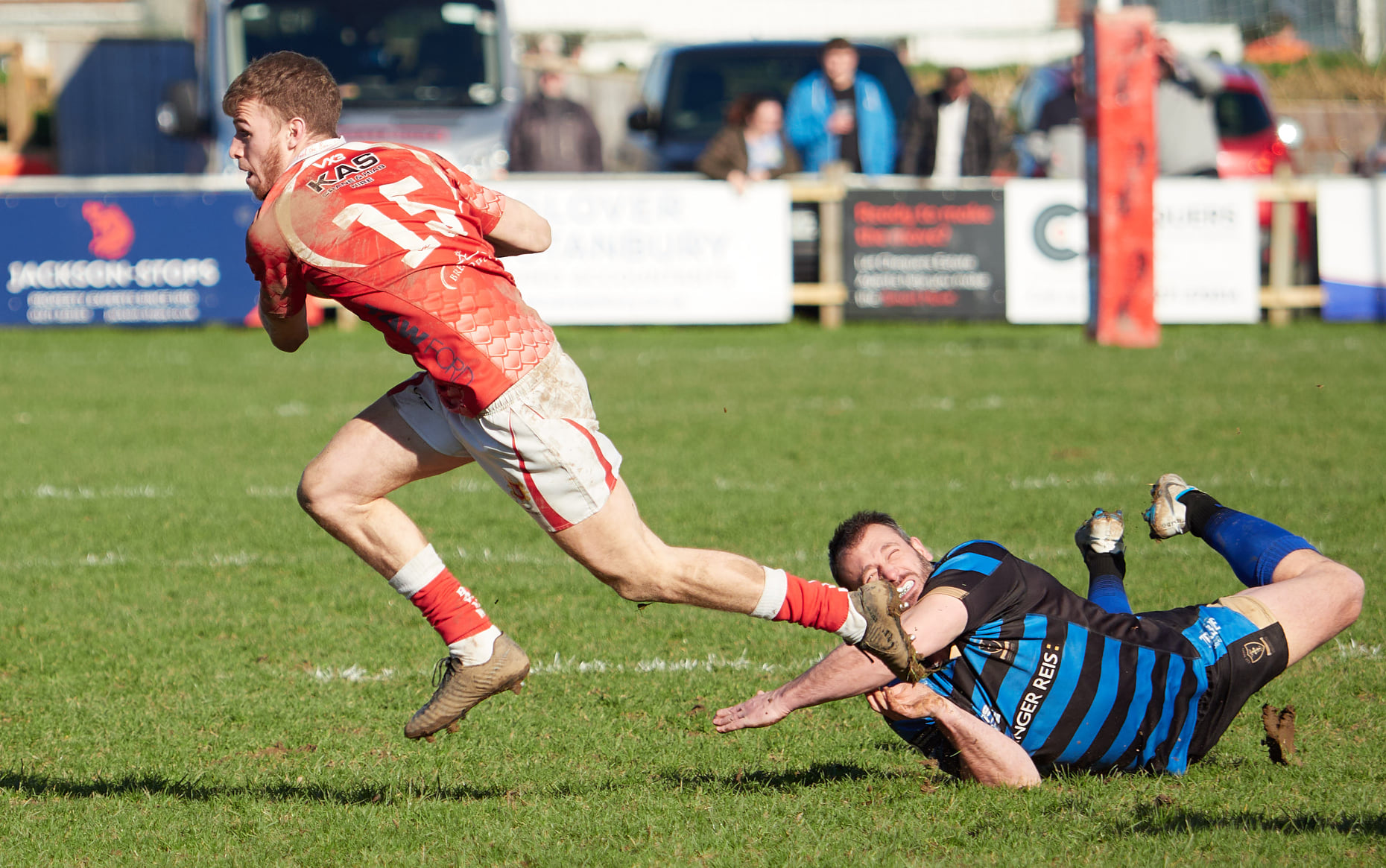 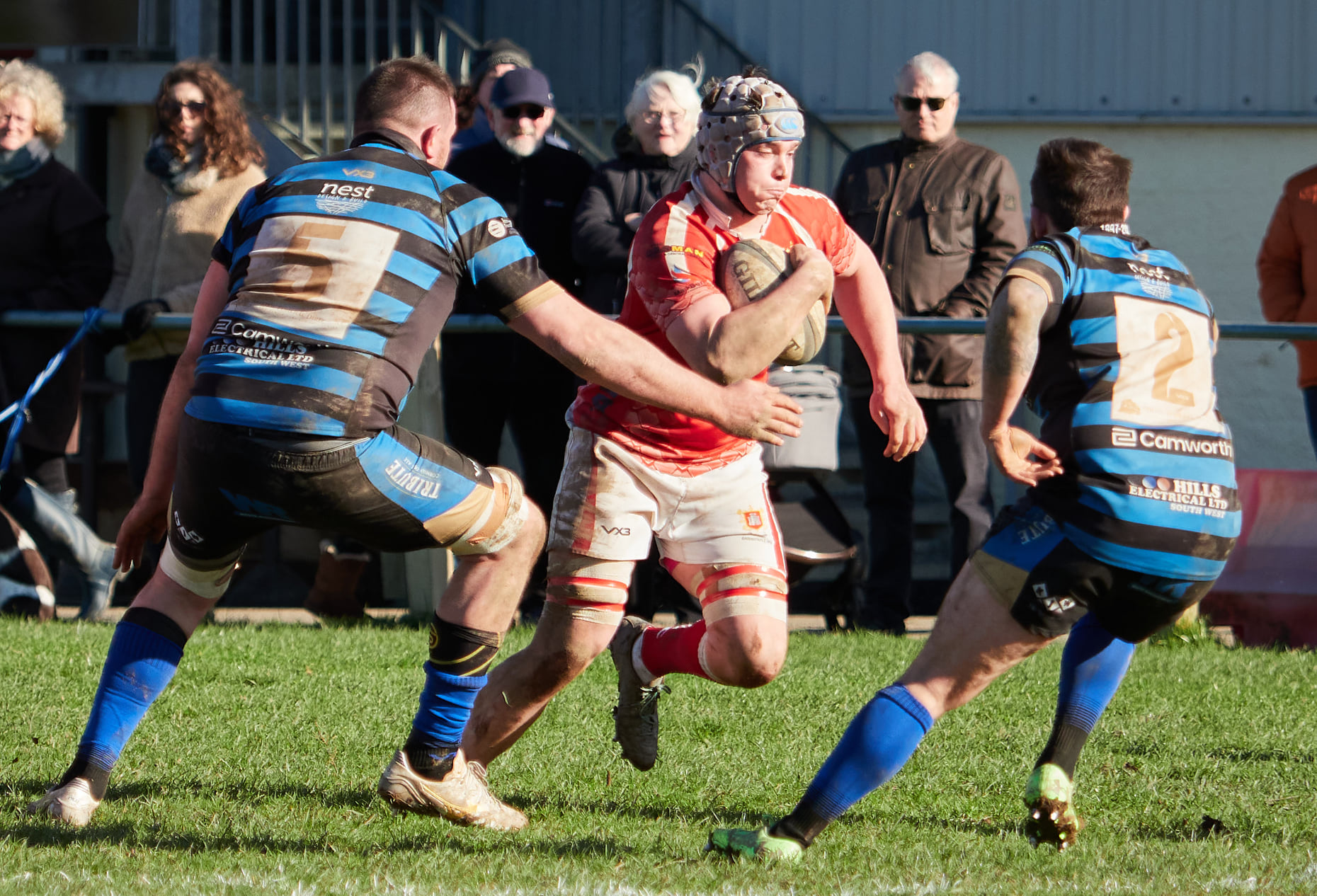 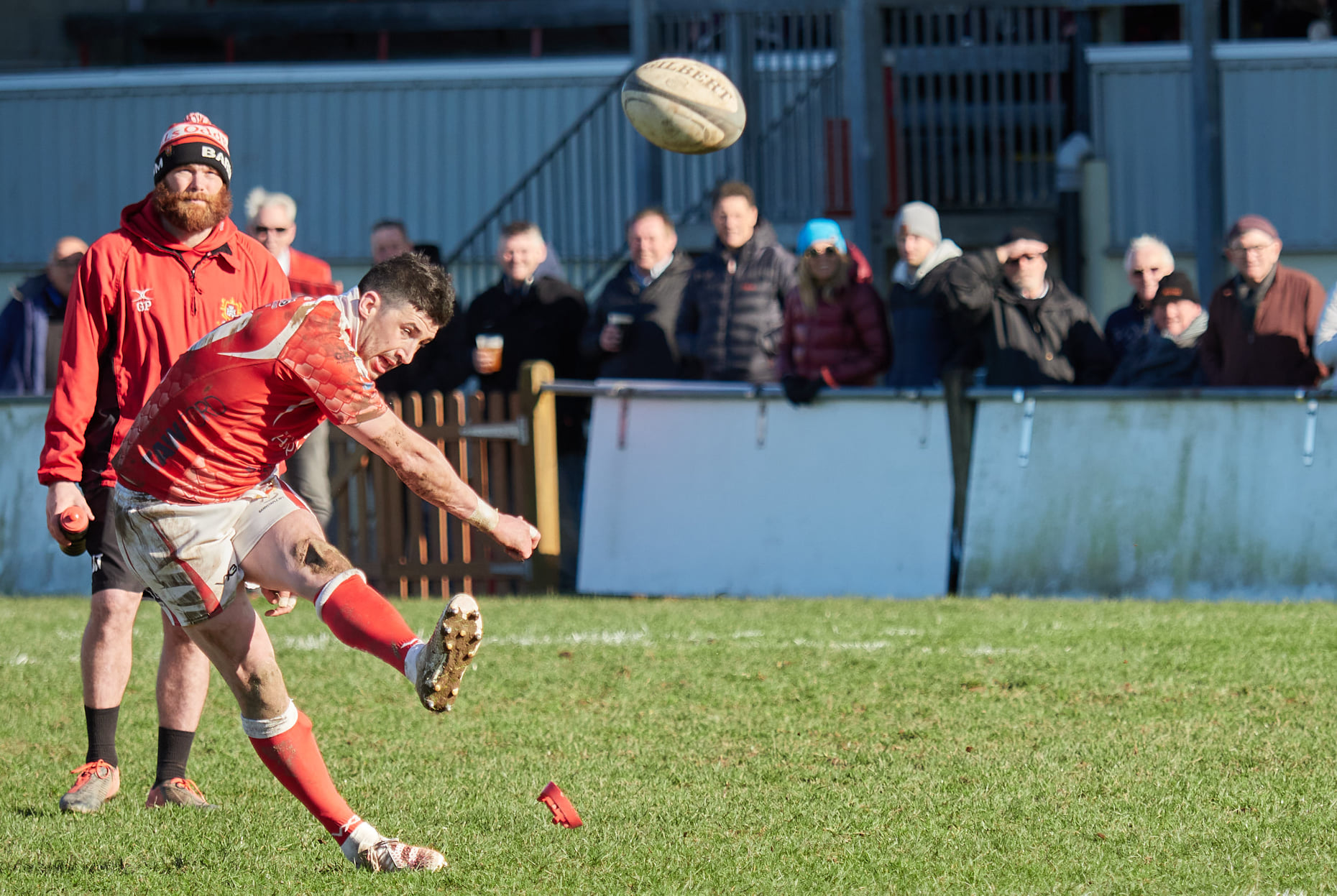 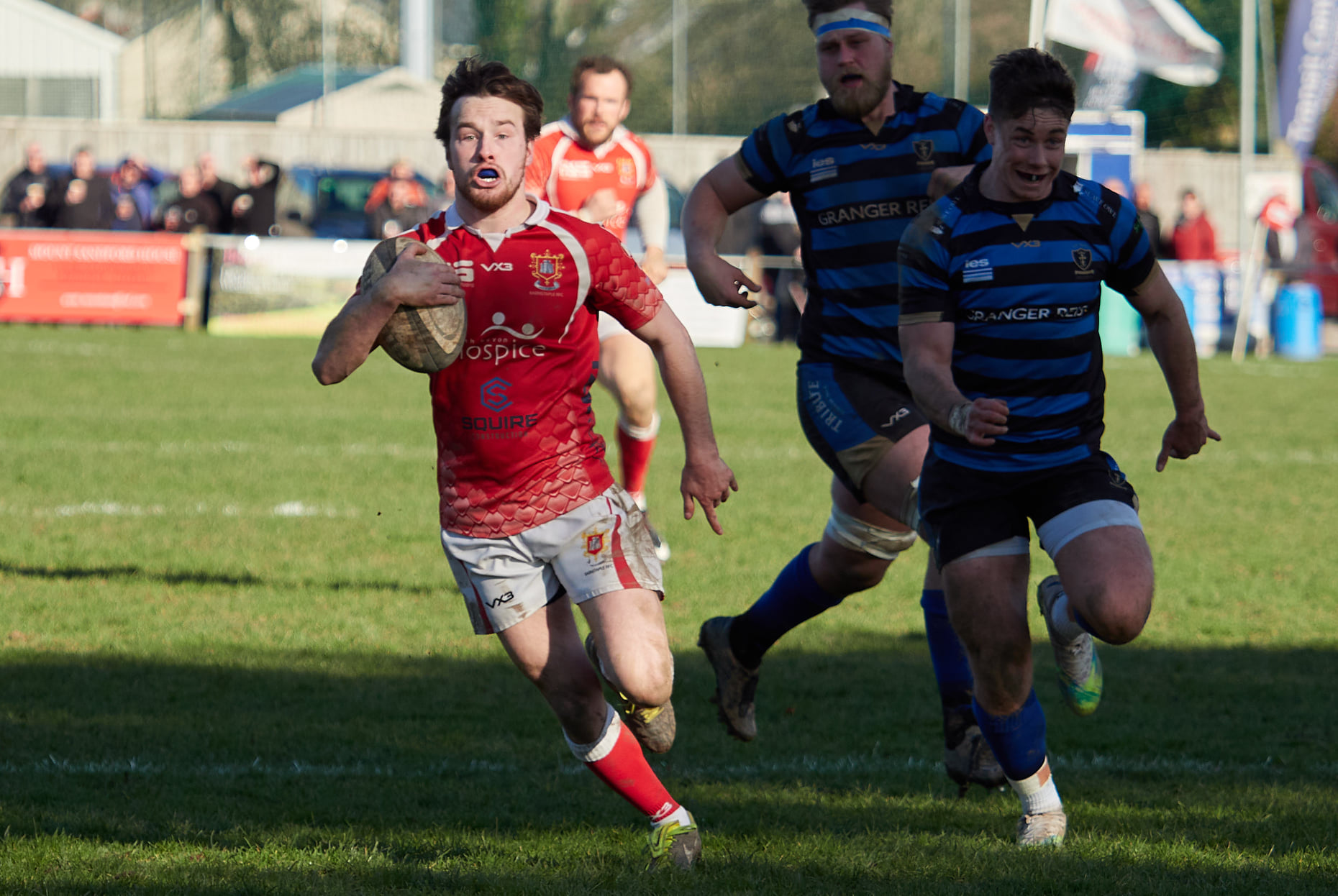 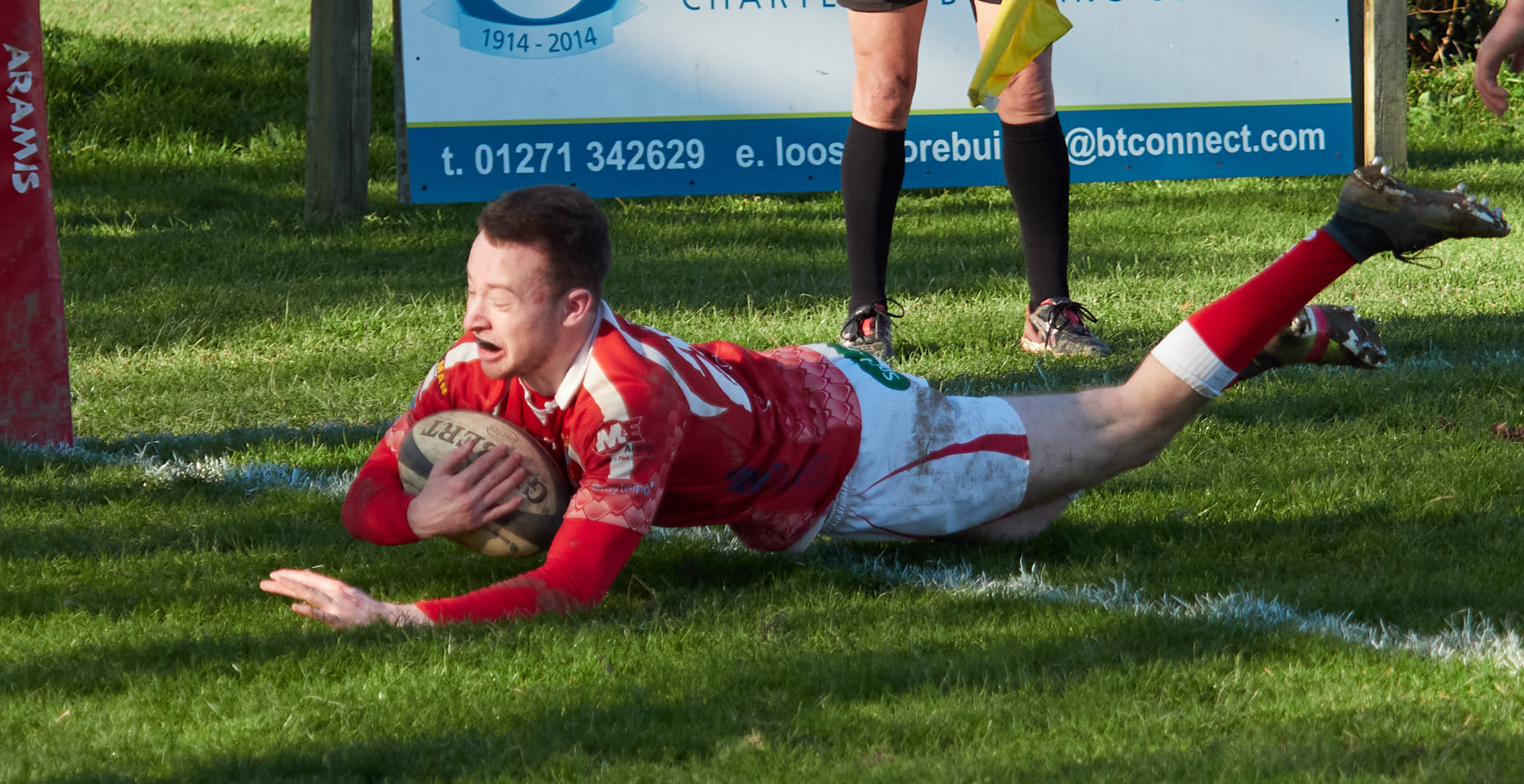 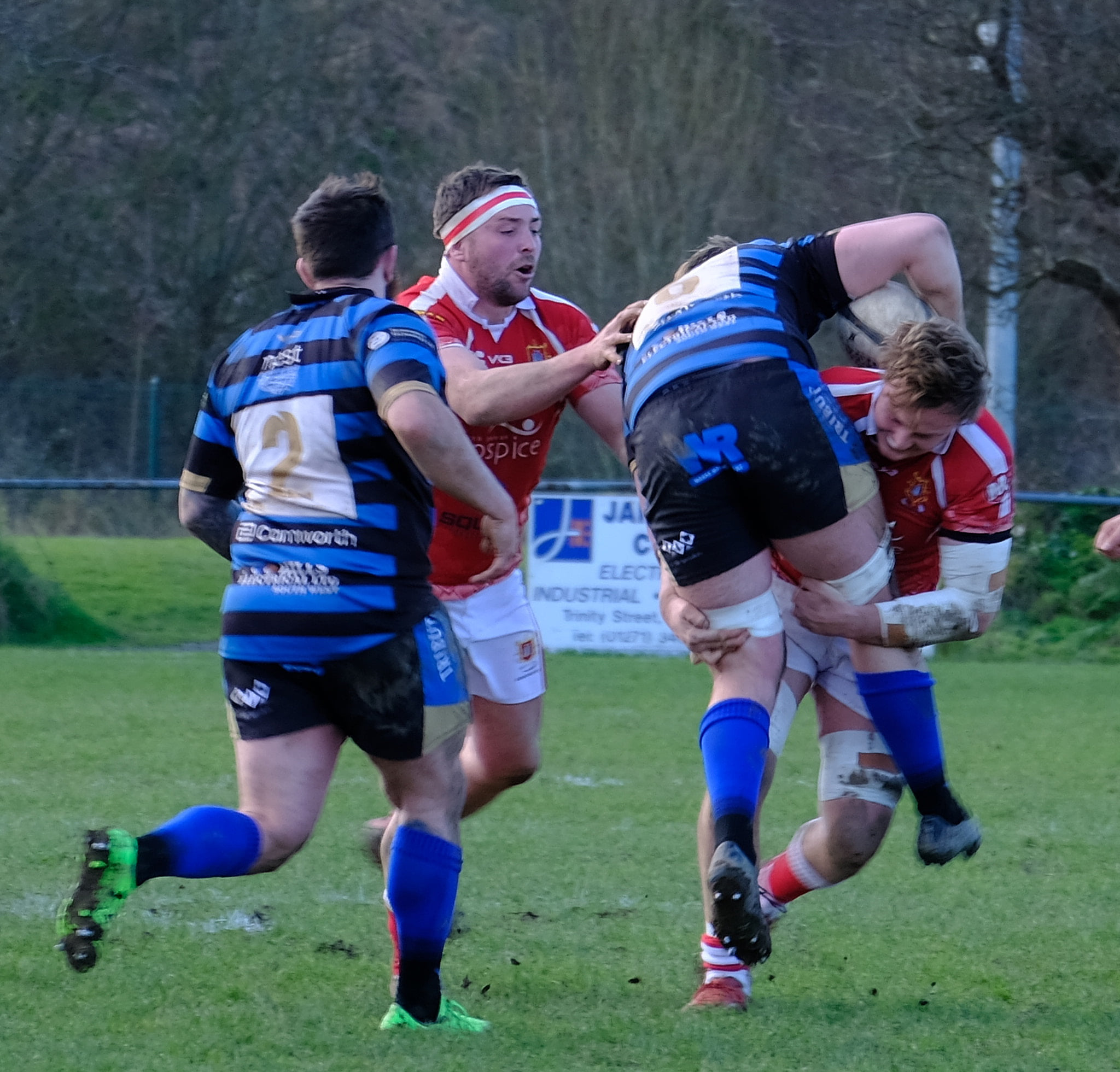 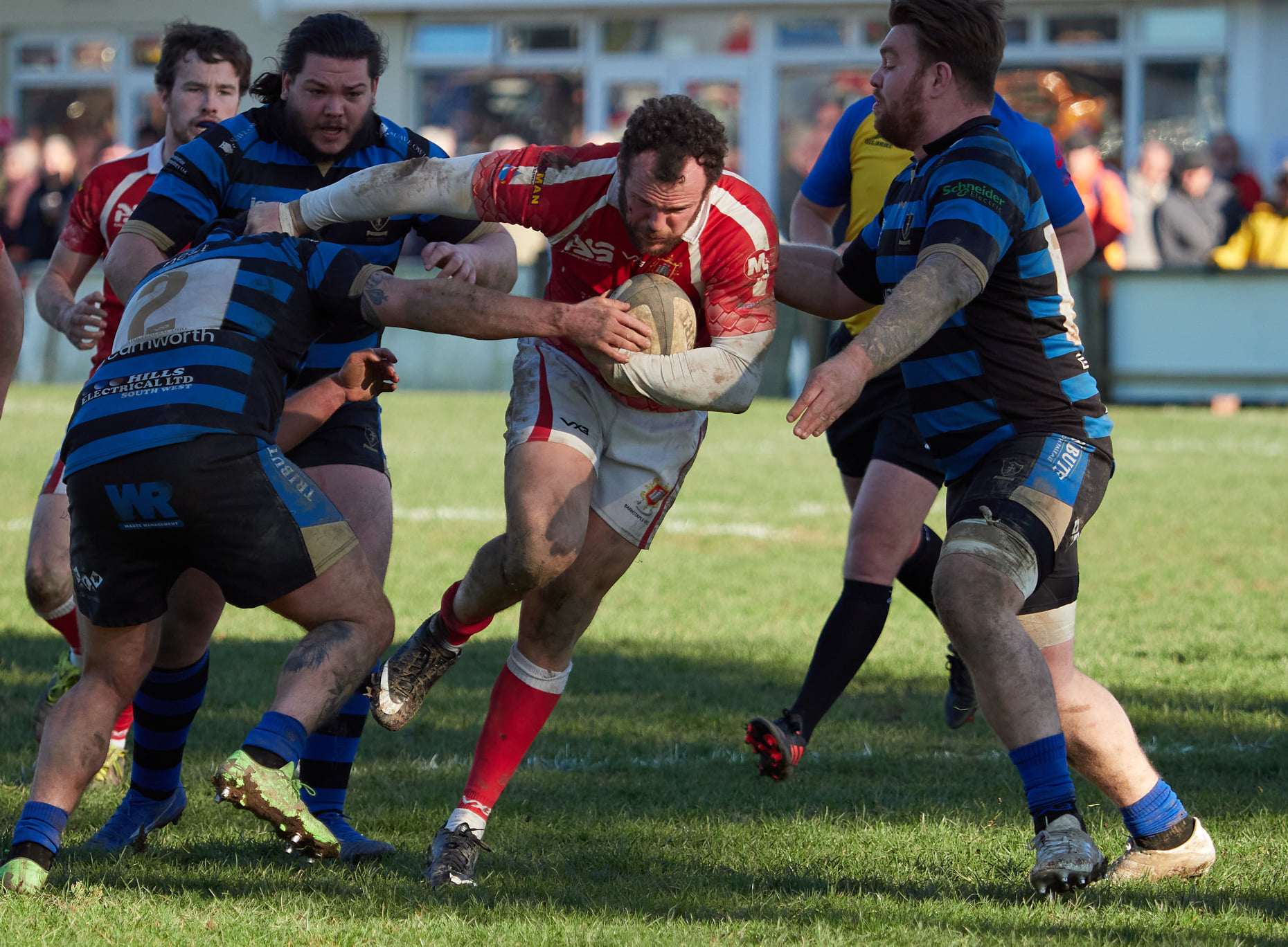 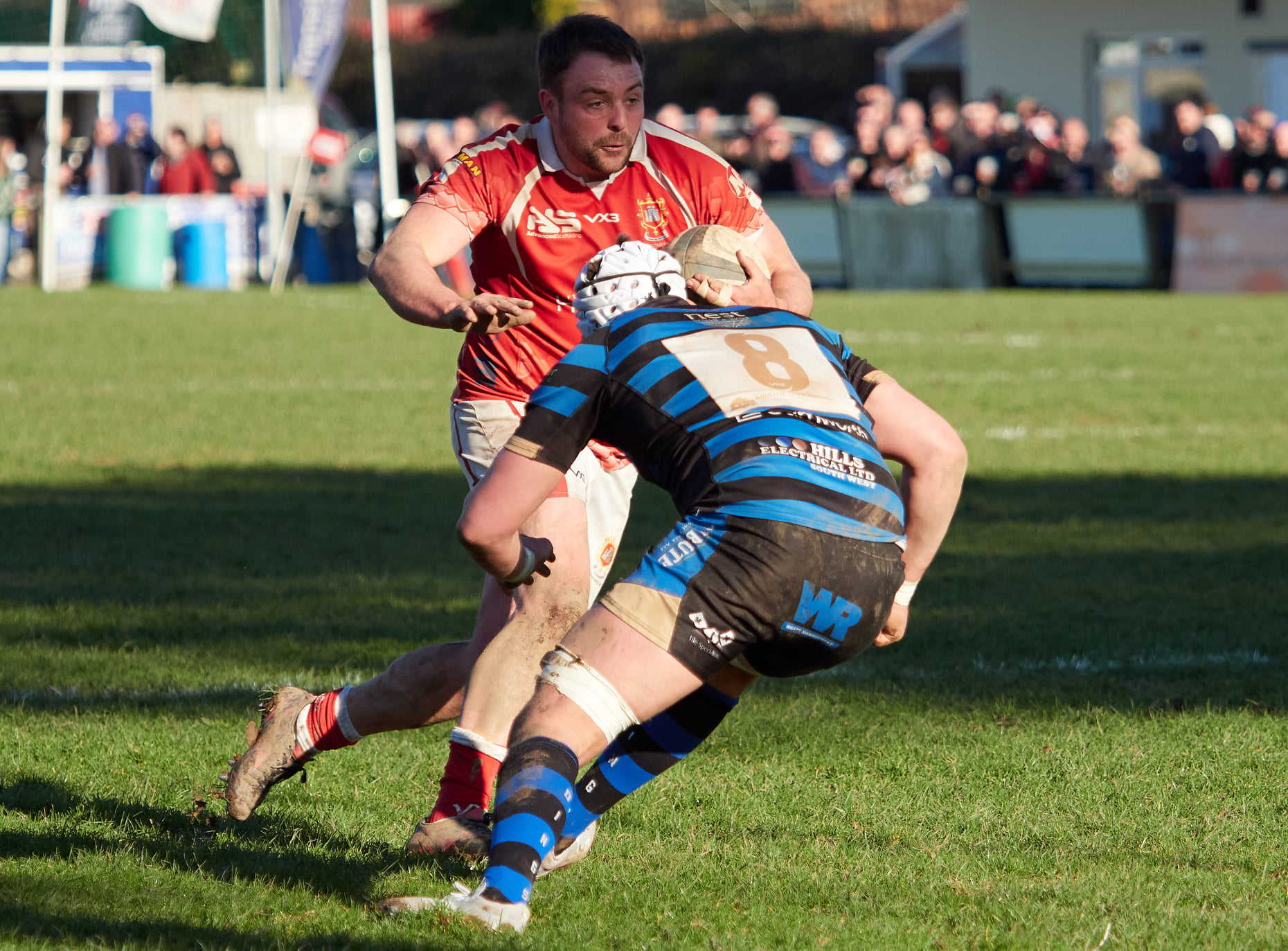 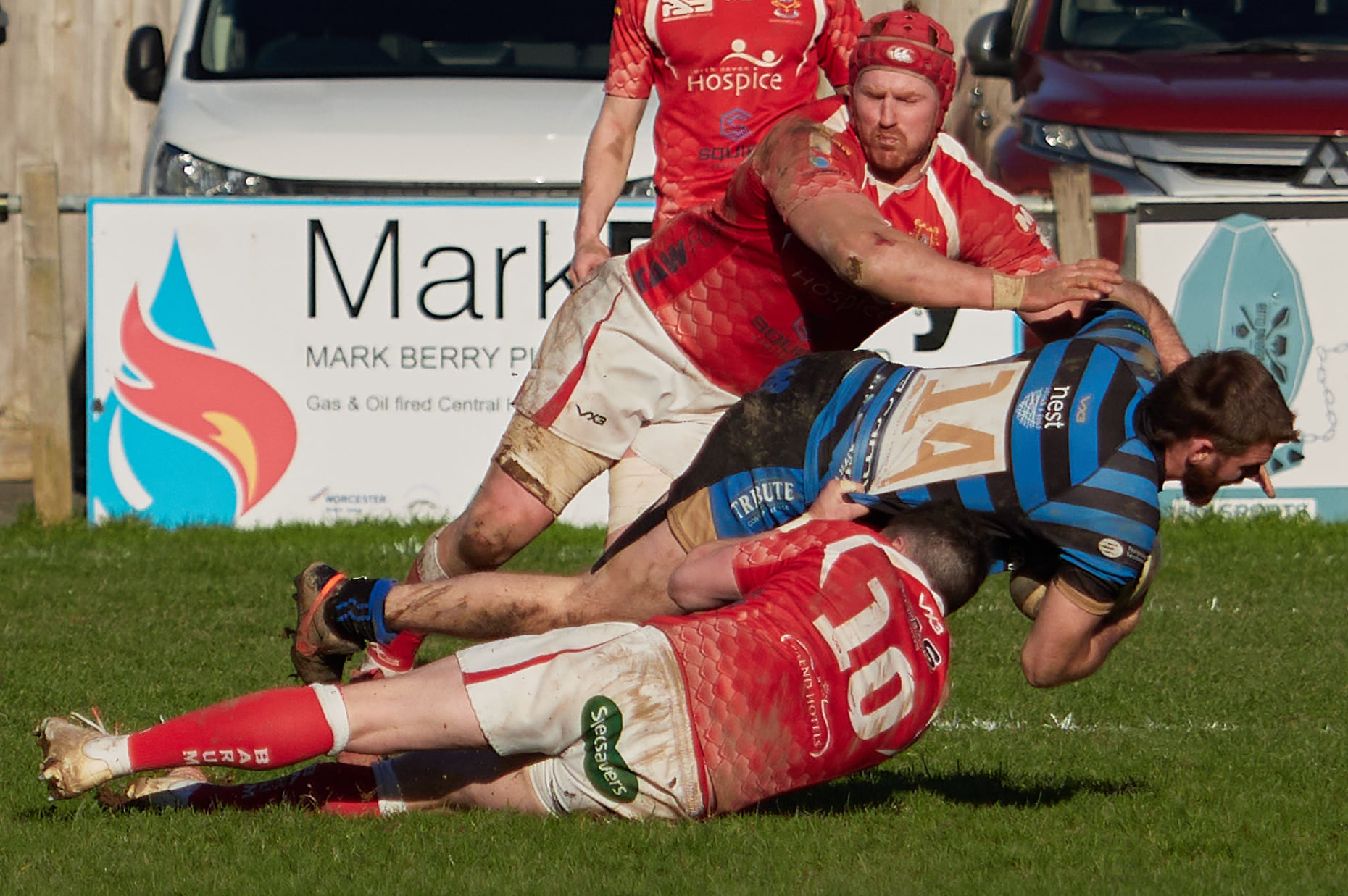 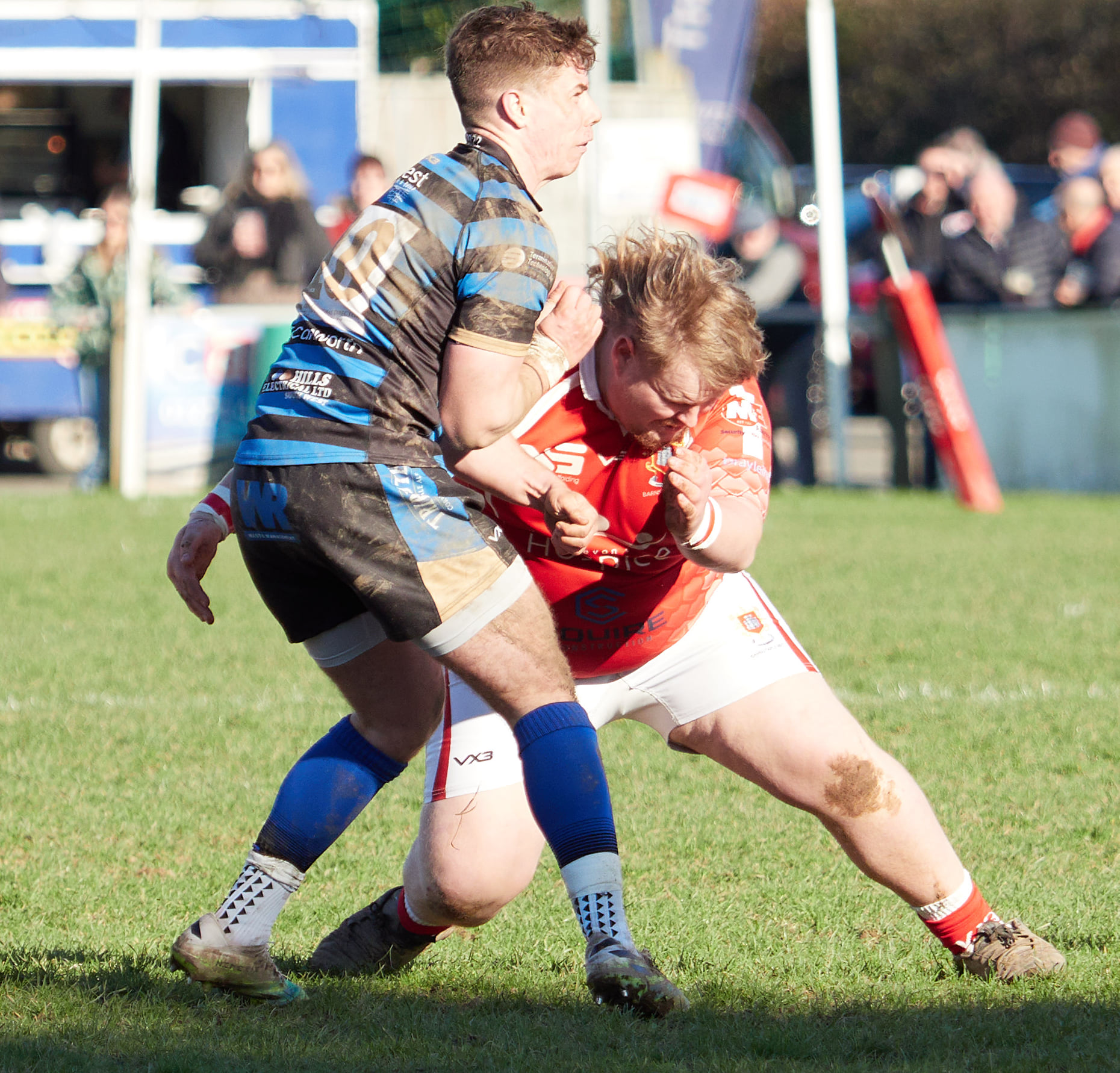 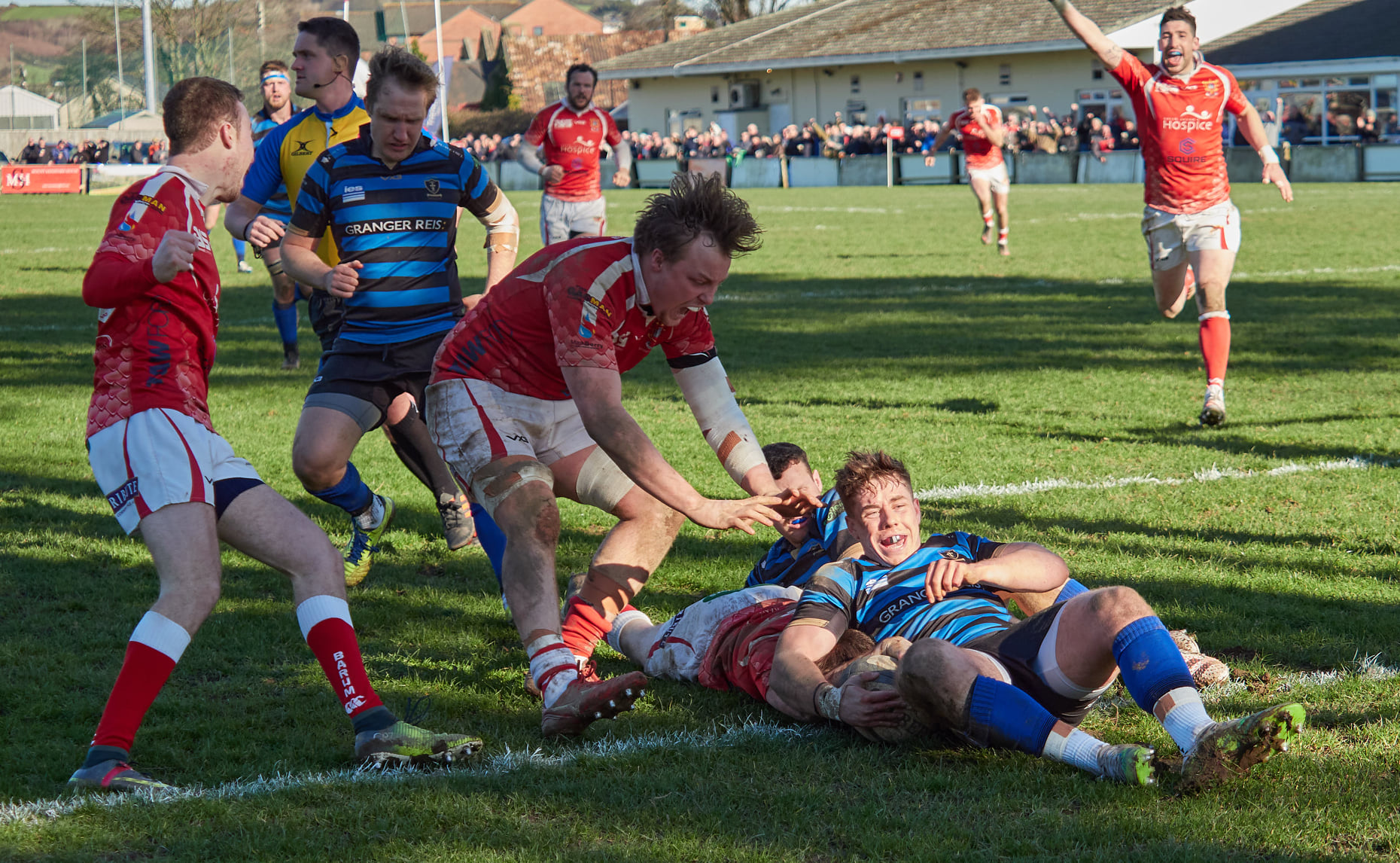 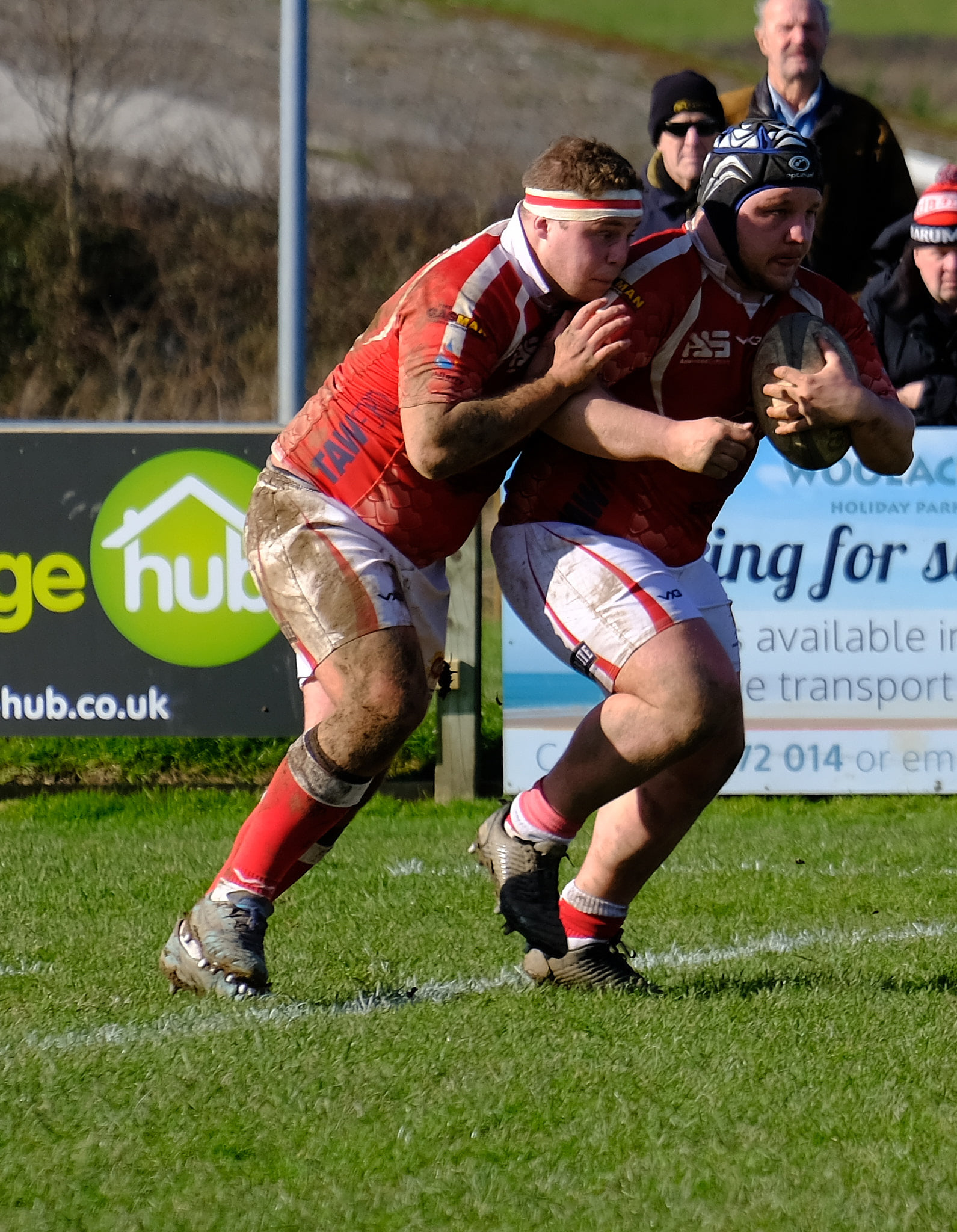 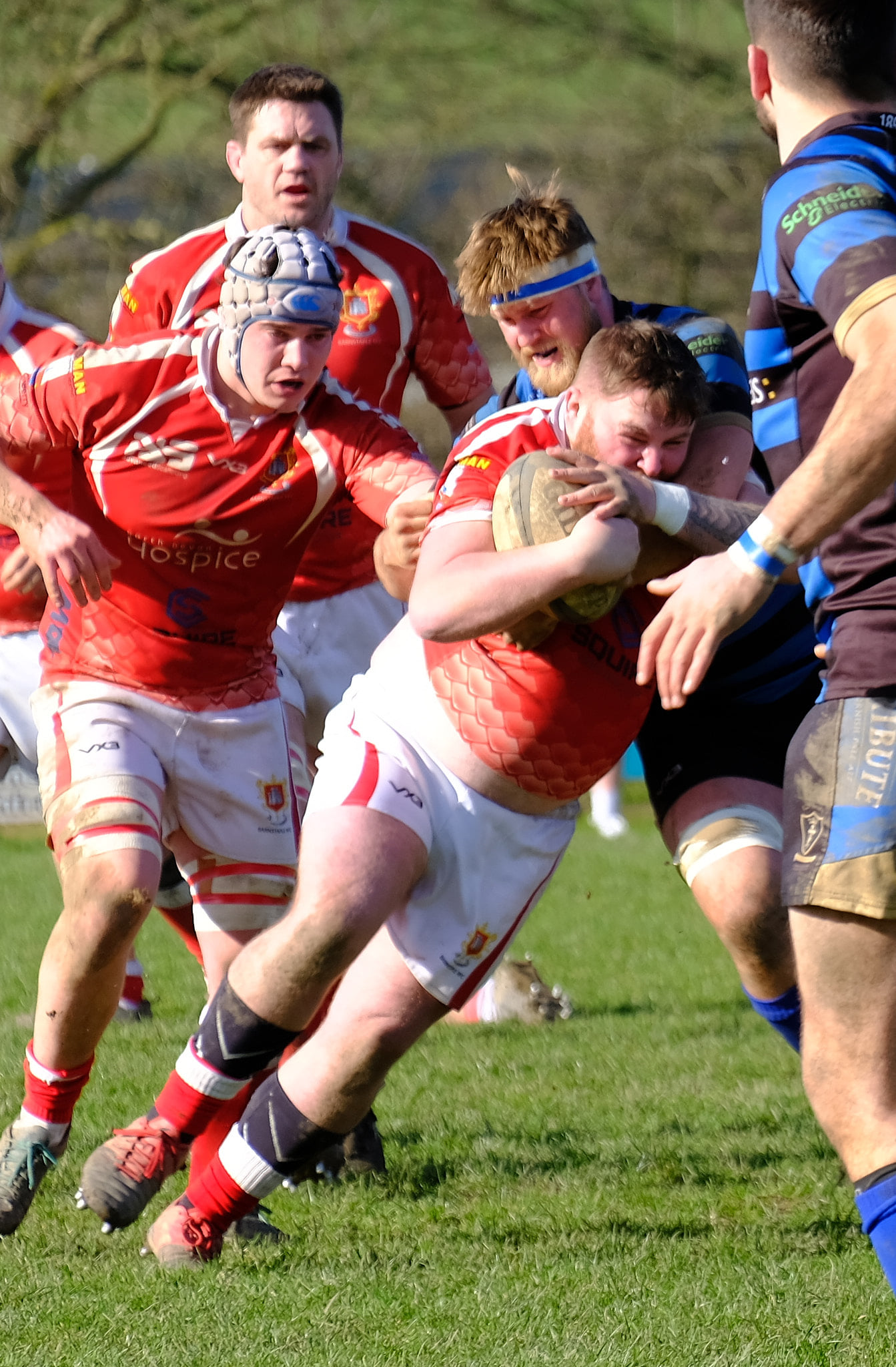 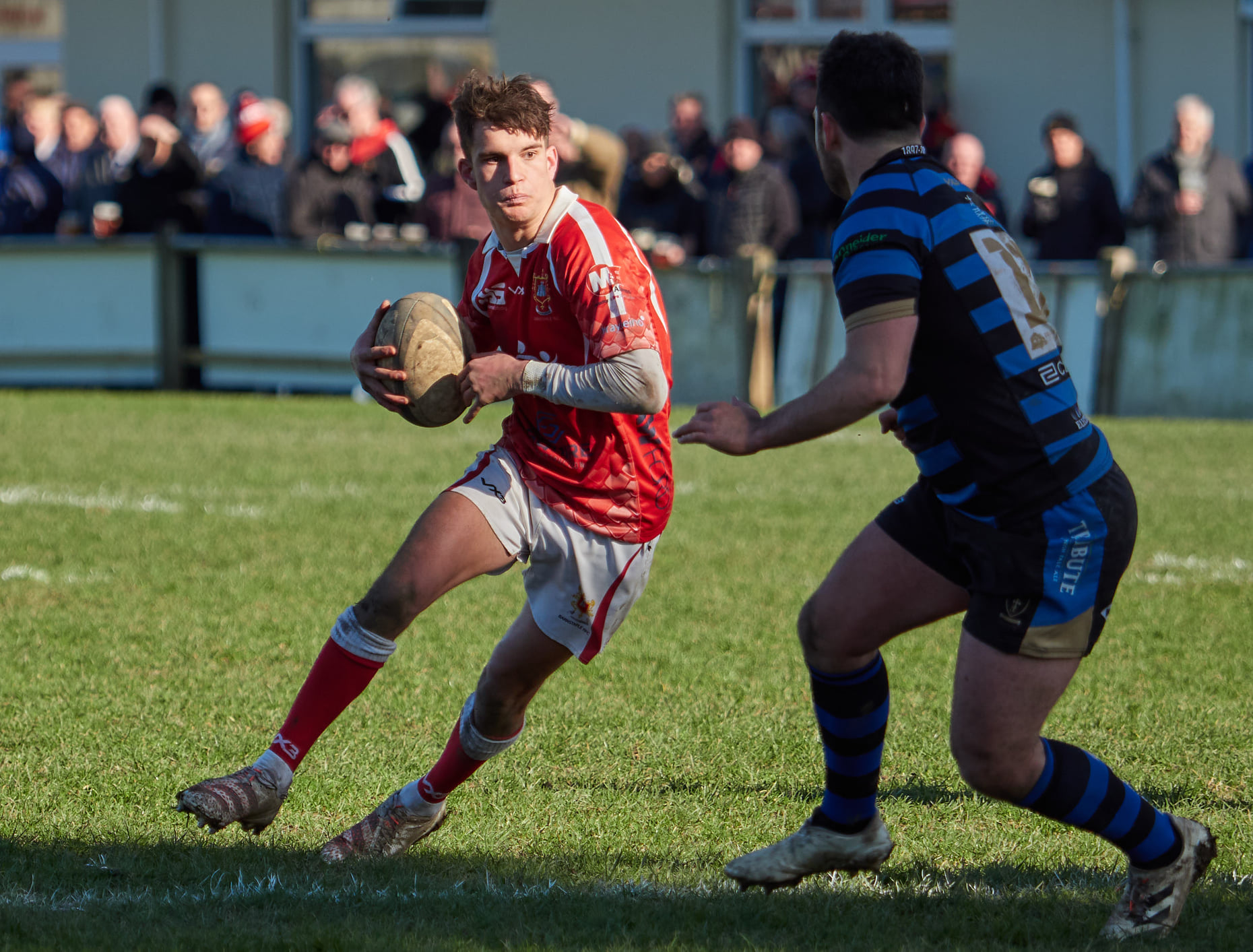 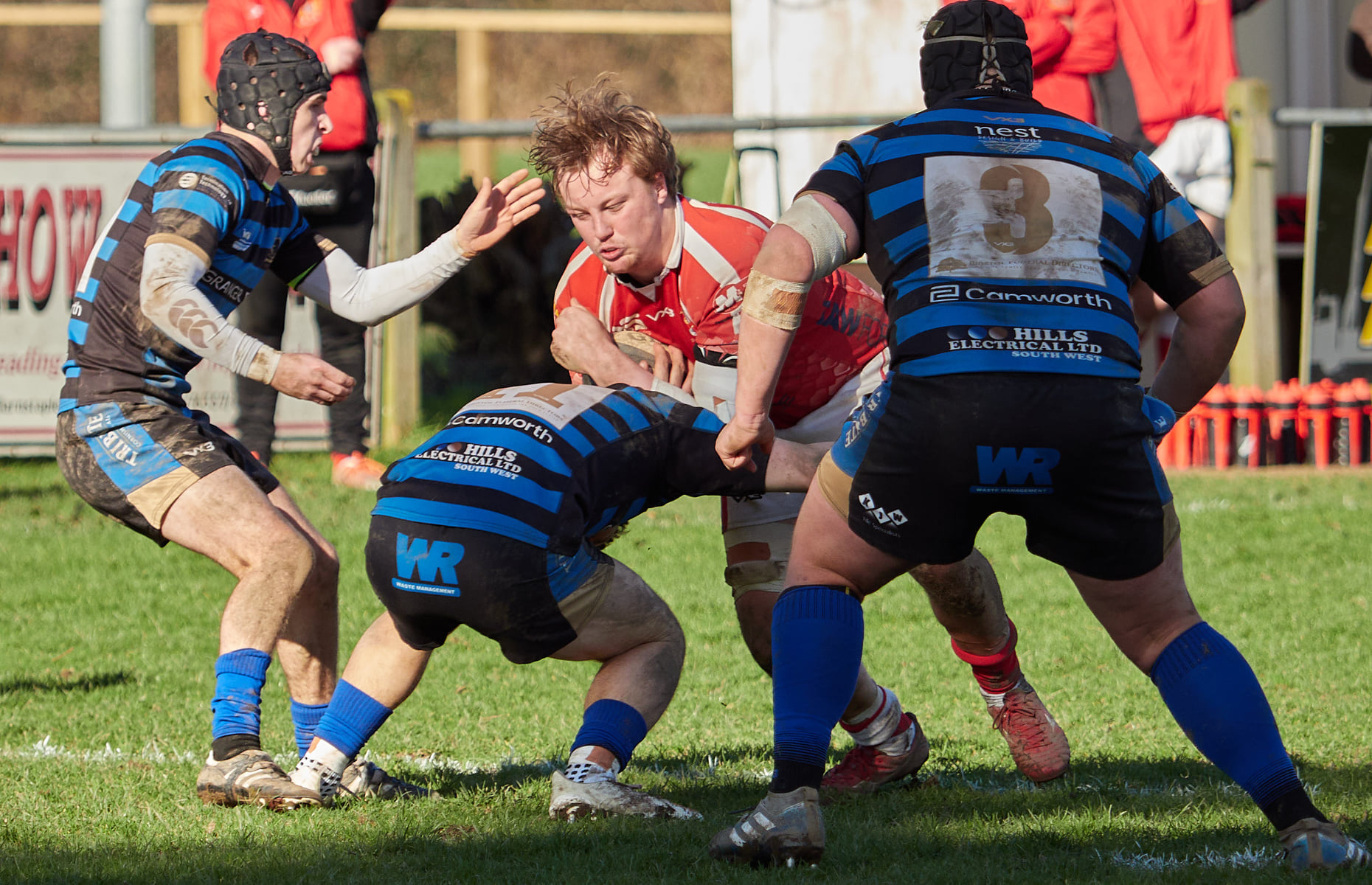 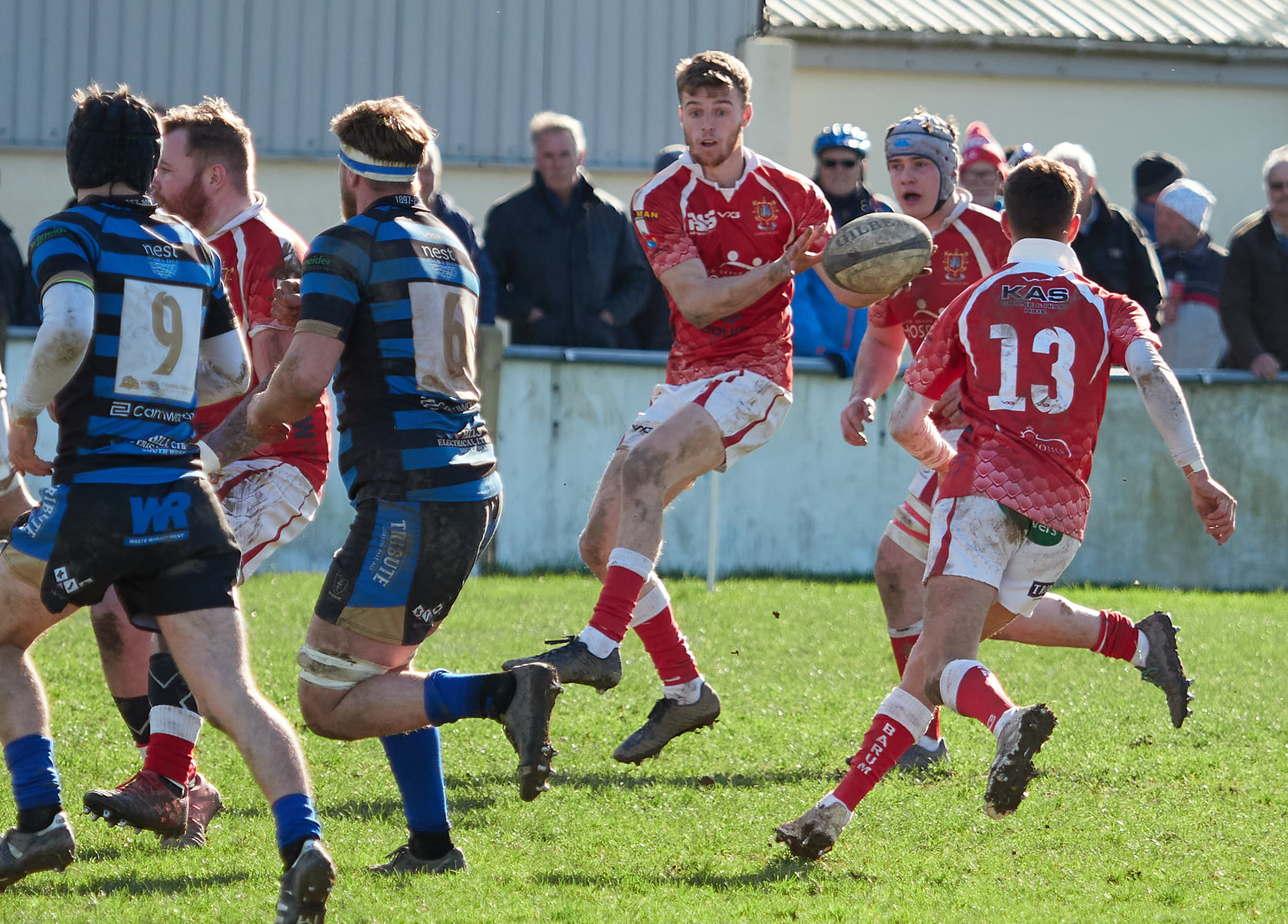 The Chiefs got off to a very quick start and within the first few minutes broke the Dings defensive line to race up the field for what looked like a certain try but for the short pass out wide being read by the retreating defender for the intercept to thwart the Chiefs first try of the game. From then on Dings Crusaders dominated the half scoring three tries in twenty minutes to take a commanding lead as Barnstaple struggled to mount any sustained attack. Both sides struggled to tame the strong wind that blew at an angle across the ground making a lottery of the lineouts in particular which troubled Barnstaple more so than Dings as a few went begging to the opposition. Penalties too were mounting at this stage against the home side which continually gave the initiative back to Dings, even so as the half closed the Chiefs did finally breach the visitors defence and finally trouble their 22 but Dings held their ground well and repelled the attack as the whistle blew for half time with the Crusaders leading 0-19.

Barnstaple came out for the second half determined to take the fight to the visitors and by doing so this time did mount some sustained pressure which troubled Dings and a lovely piece of individual skill saw Jake Murphy break a couple of tackles then chip the ball over the defenders and sprint past them to get to the ball first to touch it down for Barnstaple’s first try in three games. With growing confidence, the youngsters then to take centre stage as four minutes later following several phases Tom Swales passed the ball to brother Ross at pace and through the gap to run the 20 or so yards and stretch for the line to score his first try for the Chiefs. With both tries converted by Jake Murphy it now looked like Barnstaple might get something out of this game as the Dings lead was reduced to just 5 points 14-19.

Dings immediately hit back to try and establish their advantage and Barnstaple’s discipline again let them down as a number of penalties given away saw the Chiefs reduced to 13 men following two yellow cards and the visitors took full advantage with two tries in two minutes to further their lead to 14-31. With time ticking away Barnstaple continued to push in what was a very exciting half and now back to 15 they started to make inroads and even rattle the visitors so much so that in the last minutes following a number of penalties it was Dings turn to lose a player to a yellow card. The Chiefs struck almost immediately taking advantage by moving the ball wide through the hands to leave Tom Swales clear in at the corner for his first try for the Chiefs. With that try being the final play of the game, the Chiefs lost 19-31. 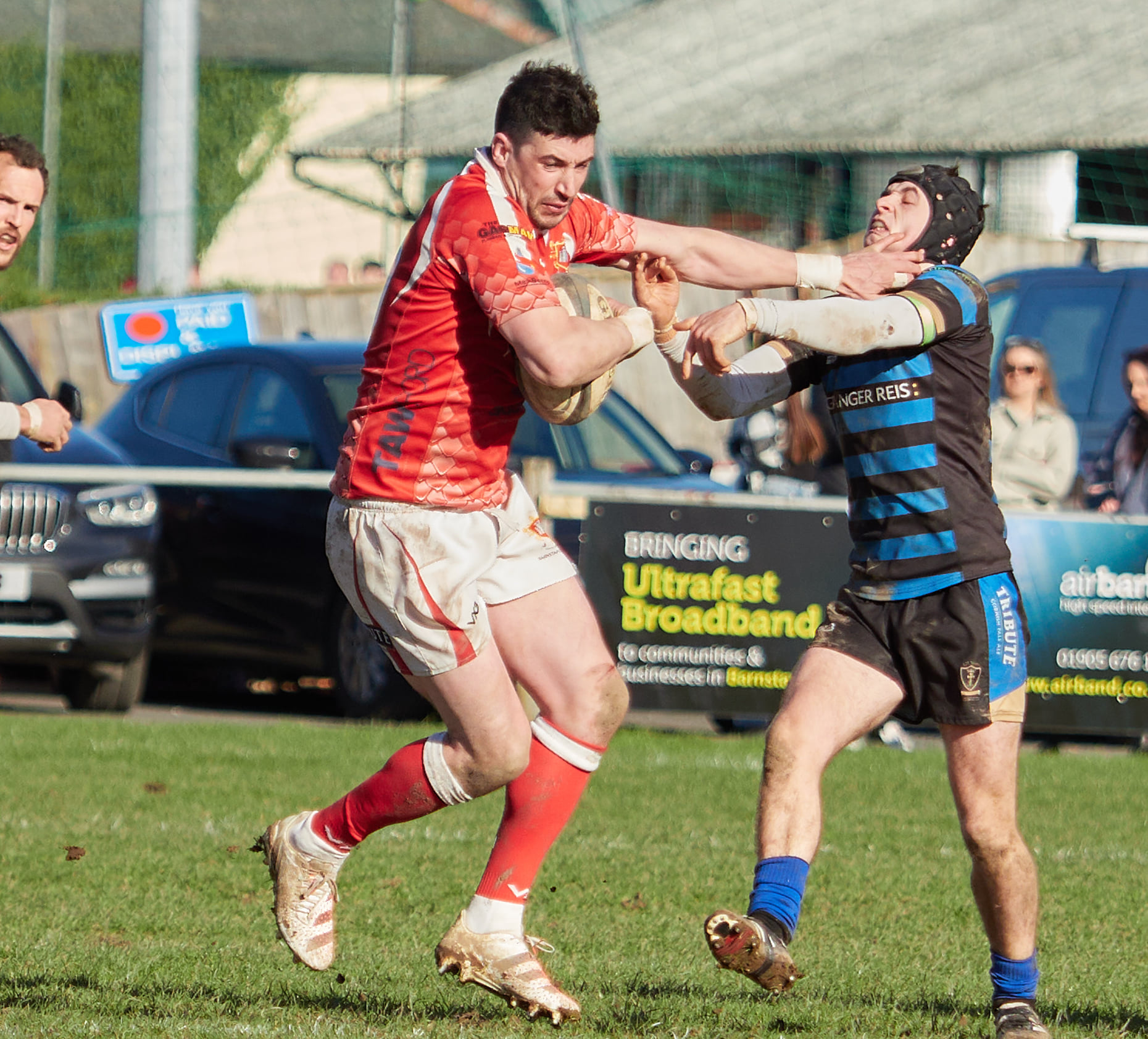 So a lot of positives in that game and so evidence that this team and these youngsters are growing at this level. Barnstaple outscored Dings in that second half 19-12 and had at one point a real chance of snatching this game but for the two yellows. Yes, the wind made it difficult but discipline was the real Achilles heel for the Chiefs in this match. Even so they pushed Dings and got them rattled in this game to score three very well taken tries and this does all bode well for next season as the team does transition to these new youngsters who are being bloodied in some very tough rugby matches. As for the game I thoroughly enjoyed it and the way Barnstaple came back into it in the second half gave everyone watching their monies worth and more. Next weekend gives the Chiefs another chance of grabbing that elusive victory with home advantage again against a struggling Old Albanians who this weekend lost at home to Westcliff 14-18 and is their third successive loss. Kick off is at 2pm so make sure you’re here early for that one.

It was also a disappointing day for Athletic who really needed to win this one at Exmouth to put pressure on Ivybridge, but it was always going to be a tough day with just two players on the bench against the third placed team in the league as it proved as the title leaders lost to Exmouth 33-24.

Always tough at Exmouth the Tic’s did start well and with tries from Zak Davie, Jamie McLagan, Callum Ford and Dominic Robson with two of the conversion successfully kicked by Harvey Rostock, not only did Athletic earn the bonus try point but were leading 21-24 as they entered the later stages of the game. This I suspect was where the lack of substitutes hurt the Tic’s as two late tries for the home side secured the win. So, a set back but not too bad a day as the Tic’s left South Devon with two bonus points in the bag and a week’s rest before they take on their biggest challenge of the season at home to Ivybridge and a must win game if there is to be any chance of winning the Title. The game is at Pottington Road on the 19th March while the Chiefs take a well-earned break and kick off will be 2pm so let’s get as many of us down there as possible to really give Athletic a boost. 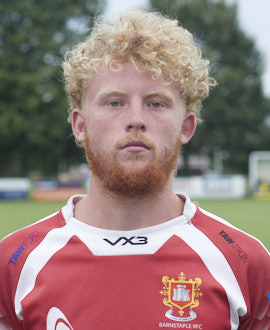 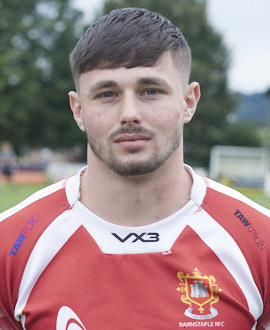 There was also more good news for Barnstaple Athletic as two of their players, Warren Goss and Brandon Moore were picked for the Devon Under 20’s and having narrowly lost by 1 point to Cornwall the Devon U20’s booked their place in the quarter-finals of the Jason Leonard Under-20 County Championship by beating Dorset & Wiltshire 26-3 at Ivybridge last Sunday. So well done to both Warren and Brandon and good luck in your next game whoever it is your due to face.

Finally, it was a very successful day for the Colts who had to travel to Kingsbridge to try and regain their momentum after last week’s loss to Ivybridge. Beating the home side 22-27 which included five tries to secure the bonus point, this was a massive result given that back in September when the Colts last visited Kingsbridge they were roundly beaten 33-0, and shows how much they have improved as the season continues. This result should give them heart as they move closer to that Cup final in April.

Well that’s all folks for this weekend except to say that given how all our teams are playing and the entertaining rugby we are seeing the future looks very bright indeed.